Coping with a transforming world with ‘The Suburbs’

Living in the half light 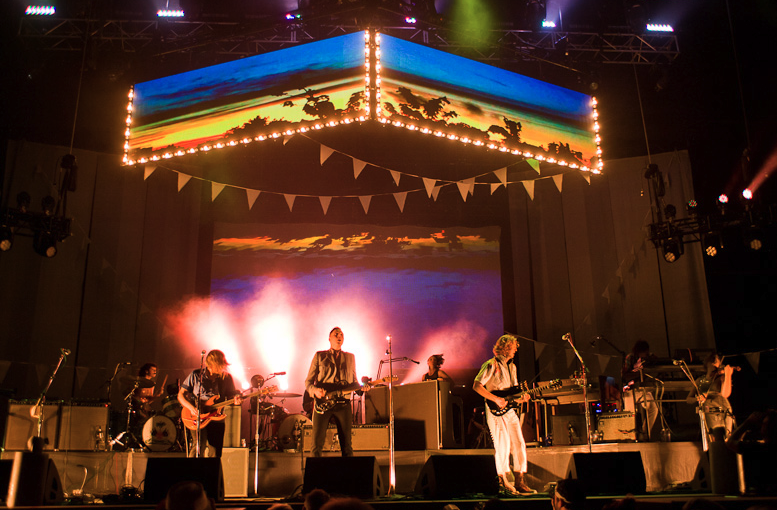 I have a fond memory driving past the sunny pond near my home in the backseat of my mother’s yellow Volkswagen Beetle; it is late summer 2010. I was 13. We were reflecting on the song “We Used to Wait” by Arcade Fire and how life for children was different before the Internet. I had yet to experience high school, my gap year or college—let alone the COVID-19 global pandemic that would change our lives years later.

The Montréal-based band Arcade Fire was one of the first musical groups that ever affected me. Just this school year, one of my Op/Eds about waiting for new television episodes could have easily been inspired from an Arcade Fire lyric. “The Suburbs” was a meaningful album to me before I bought the full CD, but never before has it moved me as it does in April 2020, nearly ten years after its release.

It’s funny, too, that I would start to see these songs in a new light because that’s precisely what the album is about: the struggle to relate to the simple impressions of our youth. Arcade Fire refers to this feeling as the “half light,” where you see those “nagging memories that still seem so important” through a lens clear enough to remember them but distant enough for them to seem foggy. It’s part of Arcade Fire’s nostalgic imagery that has caused many to connect their work to the children’s book “Where the Wild Things Are.” Half light could manifest as going back to your home town and realizing it’s not so special anymore or listening to a song and losing that charm it once had.

This may be potent for us Generation Z folks, but there’s an argument that all of us are living in the half light of a new era.

Arcade Fire’s third studio album, arguably its most well-executed fusing of classical baroque and rock n’ roll, takes a dive through the emotions of leaving an era, never to return, and looking into a future that appears to be dull and void. It wasn’t made for this time, but it nevertheless provides insight for those of us feeling isolated and fearful in self-quarantine all over the world.

Our lives are changing fast

For the narrator of “The Suburbs,” half light dawned when he went back to live with his parents in Texas during the Great Recession. As told through the track “Half Life I,” with his friends long vacated, city deprived of children and mundane activities made irrelevant by new technology, he is frustrated between wondering if the city really changed or if he changed out of the city.

This is restated in the music video for the album’s titular song. It’s made from excerpts of a short film directed by Spike Jonze and follows a group of suburban teens who grow up in a disturbing, war-torn world with two battling suburban cities. Early on, they are seen watching a neighborhood in the distance with smoke rising as if a bomb had gone off; after studying it nervously, they distract themselves with childish mischief like shooting adults with NERF guns. As time passes, the dystopia gets more severe: soldiers start occupying the streets and, towards the climax, start violently dragging neighbors from their homes.

Powerful—and unfortunately familiar—images of the friends returning to their anxiety-ridden homes are shown. Despite attempts to retain normalcy, conflicts boil between two boys whose friendship is waning. Abruptly, their frustrations bubble into violence and one friend attacks the other at his workplace while the rest of the group frantically tries to stop them. When the fight is over, both collapse, exhausted and miserable, and the sounds of emergency vehicles wailing all over the city follow.

I can’t help but relate to the desperation with which these kids not only cope with catastrophes bigger than them, but also the loss of their worlds. The effect is maximized by taking a snapshot of these privileged, white suburban teenagers who shifted from living in total naive freedom to war zones.

It made me think about how that manifested for me: I idealized a 2020 where I was walking up to collect my diploma, sharing my research, and having my last stir fry at Franklin Dining Commons. Now, quaking about the potential thousands of lost neighbors and fearing the safety of my family and friends, these motivations suddenly seem foolish and unimportant. They aren’t — it’s truly a shame — but it’s becoming increasingly difficult to relate to those feelings.

Life has been tinted with a new, darker color. We’re cast in the half light.

Start again in the month of May

According to member Win Butler, in Montréal, devastating winters are followed by a chaotic spring. “When it finally starts to break, there’s this really crazy feeling in the air as people kind of re-emerge from their houses, and there’s this almost kind of violent energy about it,” he says. A hot day can quickly turn into hail, and once it knocked the power lines out while they were rehearsing. “[The song is] is just trying to get some of that feeling onto a record.”

How uncanny that this is their explanation for their song “Month of May:” In 2020, that is the month President Trump is insisting the economy “reopens,” and in April we are already seeing fervent protests against stay-at-home orders. It feels like that “violent energy” is starting to bubble up a little early, and whether people will be allowed to see the sun remains to be seen.

As with the Montréal winter, it is doubtful the COVID-19 pandemic will leave gracefully. Indeed, “The Suburbs” illustrates crises as constant and recurring throughout. From the titular song, Butler sings that by the time bombs were being dropped, the people were “already bored.” He is warning us of apathy and naivete that results from constant barrage of bad news.

So, what do we do instead?

All these wasted hours we used to know

It cannot be missed that when this album was produced, technology was speeding up with no end in sight; now, with most of the population working remotely and with more time on our hands, it is the implied ideals, not fears, that resonate.

“Wasted Hours,” for example, reflects on the many hours spent in the suburbs as children doing nothing noteworthy. The iconic song “We Used To Wait” laments further on the speed at which people expect satisfaction, focusing particularly on the art of writing letters and waiting for the arrival of a response. At the time, this was challenging people to reject conformity and find beauty in patience.

Arcade Fire seems to intertwine this idea of patience with identity and being alone, even if it is painful. In “Empty Room,” Arcade Fire member Régine Chassagne belts out the candid line: “When I’m by myself / I can be myself / and my life is coming / but I don’t know when.” And in “Sprawl II: Mountains Beyond Mountains,” she also sings: “These days, my life, I feel it has no purpose / but late at night the feelings swim to the surface.” Chassagne is insisting that her lonesome is what keeps her individualism alive.

In 2020, we sort of find ourselves inside Arcade Fire’s Freudian slip. Technology is undoubtedly useful in this age, but it does not replace the face-to-face interaction we now yearn for. The shortfalls of the Internet are as clear as ever — full of negativity and misinformation that feels louder and louder — for many, in the absence of our loved ones’ presence.

I have learned, as others may have, the value of patience in self-quarantine. It seems hard to do much else than worry about body counts and our individual future prospects, but we have to — maybe for months. Arcade Fire’s longtime skepticism of technology once seemed overblown and dramatic, but their ideas of finding patience in older things has newfound merit.

Arcade Fire is careful to emphasize the necessity of being alone to understand one’s self while avoiding framing it in capitalist productivity terms. This album, through numerous songs, suggests that, yes, this is the time to learn who we are – but the ways in which that happens are slow and invisible. We may turn to doing things with our hands, allowing time to be “wasted,” and finding pleasure in being free from societal obligations.

Whether this is a good mindset for our future beyond COVID-19 remains to be seen, but for now, it may save lives (and our sanity, too).

Moving past the feeling

It would be presumptuous to assume how Arcade Fire would frame their own work in light of the pandemic, but luckily, we might get some answers. The band is writing new music in quarantine, and they “had been exploring a lot of lyrical and musical themes that feel almost eerily related to what is happening now,” according to Butler. In his letter to fans on his 40th birthday – handwritten, of course – he reveals that he has already been impacted. “I already know people who have been sick and died and hope that you and those you love have been spared,” he writes.

In “Half Light II (No Celebration),” Butler laments people who are admitting defeat in fear of “pay[ing] the cost for what we lost.” Butler had his own feelings in 2010, but what does this mean to me in 2020? We will have lost a lot before things get better, and we must accept that. We must not let up. Saving lives is our priority, which means staying home. The uncertainty, the hardship, and distance are the cost none of us want to pay. This is more difficult — or impossible — for the most vulnerable and dutiful among us, so they need our support, too. Once we accept this, what’s left is a game of patience.

I owe a lot of my understanding of patience to Arcade Fire. Even if this album isn’t your preferred genre, it is one itching to be heard.

For those of us at home, away from family, hoping to cultivate that patience, give the full album a listen — in order, from beginning to end, as it is meant to be heard — and appreciate the slow gaps in between, the careful musical shifts, and mentions of the “half-light,” and let it simmer.

James Mazarakis can be reached at [email protected] and followed on Twitter at @dailyjmaz.