Finding the light at the end of the tunnel 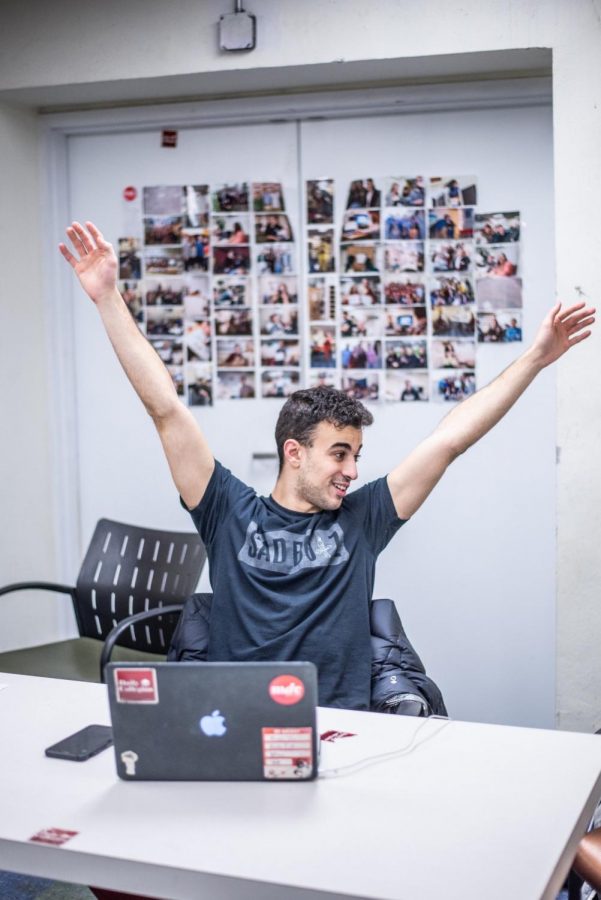 Things started getting bad in March. Or maybe February. I’m not really sure. Time blurs now.

It was weird coming to terms with the idea that I was one of “those” freshmen — the ones that got to college and fell flat on their faces, that couldn’t make any friends, that ate meals alone day after day, that couldn’t adjust to this big life step like everyone else seemingly could.

I struggle to recall the details of it now, but the winter and early spring of my freshman year all felt like one long spiral. Every day that felt like rock bottom was never truly rock bottom, and every time I thought to myself that things couldn’t get worse, they did.

The tricky part is really the lying: to your friends back home, your family, your parents, that everything’s going great. Of course I’m having a great time at college, Ma! I’ve got all this independence and all these people to be friends with and all this opportunity to make my own!

I came to UMass pre-med — the people who know me now that didn’t know me then think this is hilarious, like I of all people was ever cut out to be a doctor — and while I didn’t have any friends or emotional fulfillment or general purpose in life, at least my grades were good! That was before my second chemistry midterm whacked me upside the head, with a grueling weekend of studying earning me a sparkling 57, just about blowing my chances of anything higher than a C+ in that course to hell.

I’m going to be honest: it’s really stupid that that was my breaking point. One failed chem exam. But at the end of close to six months of seemingly endless emotional turmoil, a series of psychological gut punches day after day and week after week that I’m not going to go into detail on — partially because they get extremely personal, partially because the details just don’t matter anymore — college had broken me.

It’s hard to explain now, but in the weeks leading up to that exam, the proverbial light at the end of the tunnel felt like it was slowly disappearing. Every day I’d think to myself, okay, maybe today’s the day things turn around for me. And every day, things would get a little worse.

It’s a weird feeling, hopelessness. That sudden realization — or what felt like a realization, anyways — that things just weren’t going to get better hit me when I saw that 57. It was the straw that broke the camel’s back, and I was the camel. An exceedingly stupid straw, meaningless as test grades are to me now, but we all have a breaking point.

I don’t mind admitting that I started openly crying in the middle of Worcester Dining Commons because that’s frankly not the half of it when it comes to what an emotional train wreck I was at the time — but I packed up my things, trudged back to my dorm room in the rain, laid in my bed for about three hours and wondered if things would be so bad if I just weren’t a part of it all.

The only thing that got me out of bed that night was a Collegian sports meeting. I’d been writing for the sports section throughout the year, just as a little side hobby; without friends to see or plans to follow through on, those Wednesday night meetings were the highlight of my week, so down to the Campus Center I went, thoughts rattling in the back of my mind that I’d been trying to fight off for weeks.

As it happens, my first feature ran that morning. Before the sweeping oral histories about college basketball coaches fighting in media rooms and the 6,000-word profiles of new head football coaches, there was the feature I wrote about three UMass softball pitchers that I’d spent that last two weeks working on, big study weekend aside. I loved writing that story; as I conducted the interviews and started writing, as the story came together in my head, I was excited. For the first time in months, I felt genuinely excited about something.

That feature was the fourth story I’d had published in the Collegian in three days, along with a softball preview on Tuesday, and a softball gamer and baseball side that had both run on Monday morning. I’d spent the days between the exam and getting the results doing nothing but reporting and writing, diving headfirst into my Collegian work for the first time — even now, I don’t fully know why. Maybe I was just bored. Maybe I was running from something.

I sat on that old couch in the Collegian basement, one of the few to come by that week’s meeting, the attendance for which had increasingly thinned in recent weeks. Andrew Cyr was the sports editor at the time, now seven months removed from when he met me in the Collegian office three days before my first day of freshman year, when I was so full of hope and excitement. A lifetime ago, it seemed.

I was in a bit of a haze when the meeting started. Just a freshman, having gone largely unnoticed for a few months, I almost fell off that old couch when Cyr started the meeting by telling the group, “first of all, I just want to say, Amin, MVP of the week.” He went on for a little bit about how much work I’d put in those last few days, filling in for people at baseball, putting the time into that feature — to me, the little quiet freshman who didn’t think the upperclassmen could’ve picked me out of a lineup, it was genuine shock.

And down the line the assistant sports editors went, Kyle DaLuz, Nick Souza, Adam Aucoin, telling me what a great job I’d done that week. In seven months at UMass, it was the first time I’d felt any real sense of accomplishment. The work I’d done, and the little bit of recognition that followed, felt fulfilling. I hadn’t felt fulfilled in a long time.

Those guys will probably never know what that night meant to me. Quite literally hours removed from what seemed like a realization that hope was running out, I had a little hope. Maybe that fulfillment was something to follow. Maybe I needed a change of pace.

You know what’s funny to me now? That feature sucked. Truly. Three years later, I read that story and I wonder how any of them thought it was any good.

But because of that night, because of the way I felt on that couch, at the corner of hope and hopelessness, I kept writing. I covered that softball team like it was my life’s work, I put my name into the hat for an assistant sports editor role at the end of the semester, and Kyle took a chance on me. He took a chance on an 18-year-old kid, not even a journalism major yet, but who seemed like he gave a damn.

Four years and 245 bylines removed from my first day on campus, that all feels so far away. The emptiness, the dread, the sadness that colored every day for a while there — it’s all very strange now. It’s not like things are perfect; when you find yourself at the brink, feeling like you’re teetering on the edge of those thoughts you told yourself you’d never entertain, that battle never really goes away. There are good days and bad, ups and down — mental health is complicated, mine no exception.

I kept sinking my life into the Collegian, and it kept rewarding me with that fulfillment. Every big project, every feature story, there was always that spark, that moment of accomplishment; I’ve been chasing that for three years. The stories, the experiences, the memories, the friendships — they keep me going. They have for a while now. They’re my light at the end of the tunnel.

When I was diagnosed with an anxiety disorder midway through my junior year, it felt like another low point, like I was headed toward that abyss again. I spent those weeks sinking myself into the work, putting everything I had into an oral history that I never thought I could pull off — the day it ran is still one of the most fulfilling days of my life. Through every experience that felt like a low point, the Collegian guided me through.

It was sometimes hard to explain to some people why I’d decided to run for Editor in Chief a little over a year ago; hell, I’d made the job sound like a voluntary death sentence. With where I was in my life, and where the Collegian was, I knew the job was going to wreck me. In a lot of ways, it did. Sitting in my car back in October, sobbing on the phone with my mother and telling her that taking the job was the worst decision I’d ever made, even I couldn’t fully explain it. It wasn’t fun like it used to be. It wasn’t simple like it had been.

But six months later, I don’t think I feel that way anymore. Through all the stress, the difficulties, the bad days, I still knew deep down why I took the job: what I owed, what I was given when I was lost, with no understanding of who I was or who I was supposed to be. At a time where the Collegian was going through a transition, when it felt like the paper was moving toward its own breaking point, it felt like I had to step up and try and save the place.

Amin Touri was the Editor in Chief of the Collegian. He can be reached at [email protected], and followed on Twitter @Amin_Touri.