The red spray-painted graffiti was the Arabic word for ‘Palestine’ 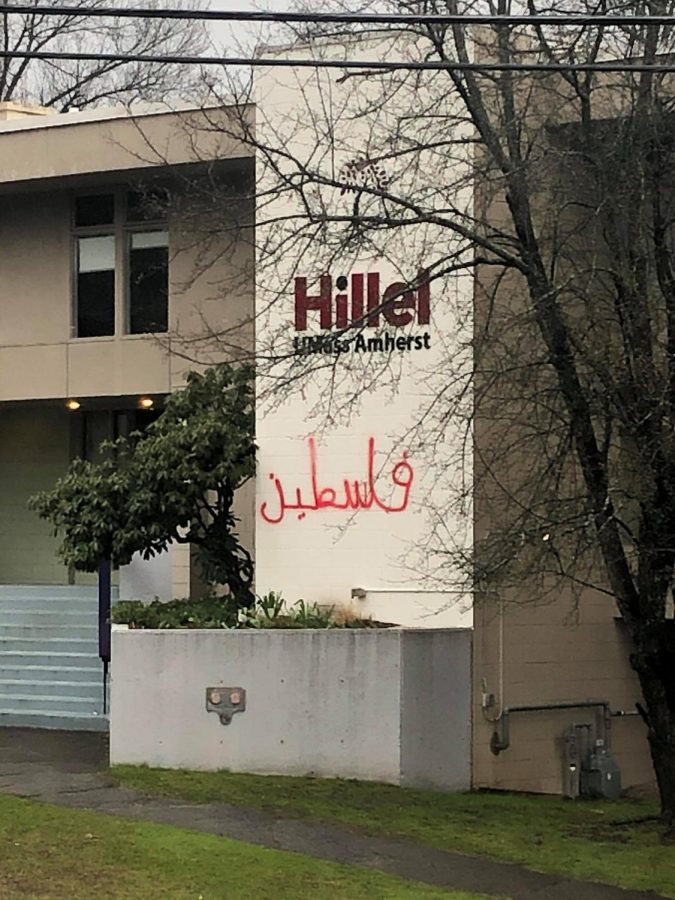 By Will Katcher and Kathrine Esten

On Tuesday morning, red spray-painted graffiti reading “Palestine” in Arabic was found on the front of the UMass Hillel House in Amherst.

The graffiti appears to have been painted on Yom HaShoah, Israel’s day of remembrance for the victims of the Holocaust. The holiday began in Israel on Monday night at sundown and continues until Tuesday at sundown.

Images of the graffiti were shared widely on social media during the day on Tuesday.  According to a statement on the UMass Hillel website, the graffiti was reported to the Amherst Police Department, the University of Massachusetts and other organizational partners.

“This cowardly act of hatred towards the Jewish community amidst a time of global crisis and on Yom HaShoah, the Holocaust Remembrance Day, is reprehensible,” the statement reads. “Our UMass Jewish community is resilient and strong, and in the face of this hate we will only deepen our commitment to empowering students to build vibrant community based on values of love, respect, justice and peace.”

In an email to the school community Tuesday afternoon, UMass Chancellor Kumble Subbaswamy called the act one of “brazen anti-Semitism.”

“The timing of this cowardly act, on Holocaust Remembrance Day, is deeply repugnant,” he wrote.

According to Subbaswamy, an investigation is underway by the Amherst Police Department. “However, the UMass Police Department has been notified and has contacted APD to offer assistance,” the chancellor added.

“The SGA will not stand for intolerance, hate crimes, or vandalism of any kind. As a Jewish woman, I am disgusted by this act,” Student Government Association president Rachel Ellis said in a statement posted to the group’s social media accounts.

“While support for the Palestinian people and belief in their right to have their own country is completely legitimate, and has the right to be voiced through our First Amendment, this act of vandalism was clearly an act of hatred toward the Jewish community during this time of global crisis,” the SGA statement also said.

Taylor Orton, the house director for Iota Gamma Upsilon, said she was alerted by a colleague about the vandalism around 8:30 a.m. Orton said she was heartbroken for the Jewish community and wanted to offer her support to UMass Hillel.

“You hear about this type of stuff happening, but to see it first-hand was heartbreaking,” Orton said.

The Hillel Council of New England stated on Facebook that it stood with UMass Hillel and condemned the act: “On today, Yom HaShoah, let us remember the Holocaust and reflect on its lessons for these scary and uncertain times.”

Editor’s note: This article has been updated to clarify source and circulation of photo.