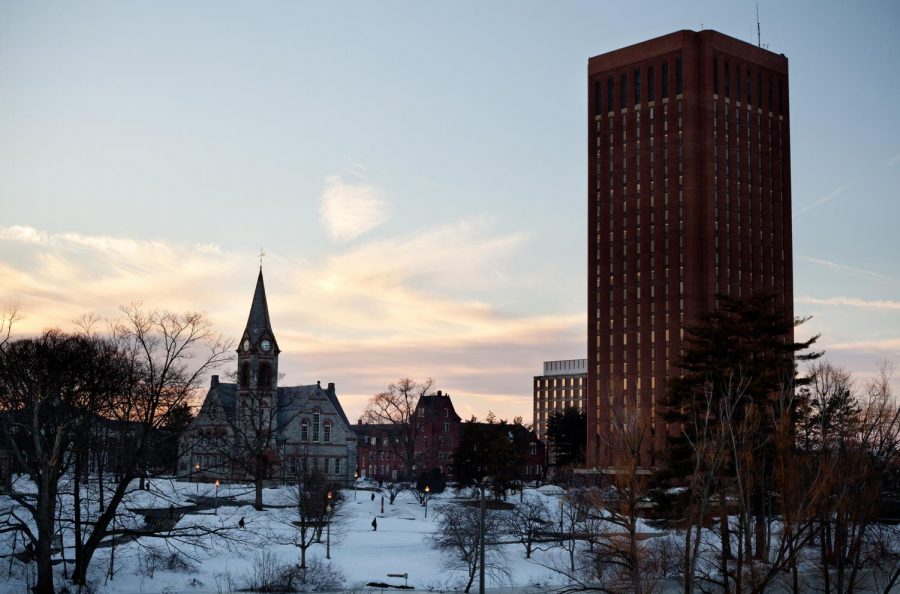 Approximately 500 students were granted permission to stay on the University of Massachusetts campus throughout the remainder of the semester, according to information provided to the resident assistants on campus.

The majority of these students are either international, have extenuating circumstances or are among the group of RAs who volunteered to remain on campus as a support network.

The deadline for students to request to stay on campus was March 18 and the University offered this option to students with a number of designated “personal circumstances.” Included in this list are student employees, on-site interns and international students.

Students with other personal circumstances were also allowed to stay, including students in the foster care system, independent students and students whose home community is quarantined. Students for which “returning to home represents a health/safety threat” and situations where insufficient internet and technology capabilities at home would prevent the student from taking online courses were also included.

Students could apply confidentially through Spire by filling out a “permission to stay” form and were told to expect to hear back by noon on March 20.

“We got emails from the University, but they were very vague,” said Curry Kautz, a freshman neuroscience and psychology major, reflecting on the process of moving in after spring break. “Nobody was sure if we were going to be moved until a few days before and we had our new keys taped to our doors.”

Students who were approved for housing were allowed to continue with their prior payment plans on campus, however student activities were shut down and students are not allowed to have guests.

Students have been consolidated into a smaller number of dorms around campus, and only Worcester and Berkshire Dining Commons are open from 7 a.m. to 9 p.m. The dining commons are taking social distancing precautions, including making the more limited food selection only available for takeout, and limiting the number of students allowed into the dining halls at any given time.

Students commented on the emptiness of campus as being both a positive, with more space to spend time outside, and a negative, as it can sometimes feel lonely. They described daily routines consisting mostly of visits to dining halls, walks or runs outside and days spent studying in the dorms.

“I’m on campus because I’m international and going home wasn’t feasible,” explained Chinemerem Nwokemodo, an RA and senior biology major. “My daily life is [kind of] the same, I wake and try to get some work done before noon. At noon I go to dining to get lunch and dinner because I don’t want to have to leave my building twice. For the rest of the day, I stay in my room and try to get more work done.”

“My days are [kind of] basic honestly,” Nwokemodo added. “It’s different and it could get lonely sometimes, but I enjoy not having too many people on campus”

“I’m staying on campus because I’m a foster kid and don’t have somewhere else to stay,” said Kautz. “Campus is pretty abandoned.  I think other people have one or two friends they hang out with. But I just hang out with the trees.”

“The most obvious challenge is the dining halls,” they added. “Only Worcester and Berk are open and they have much less food, all to go. Upsides are that because the campus is abandoned you can be outside and have lots of space to yourself. There isn’t really anything open except the dining commons and university health.”

For RA and senior art and mathematics major David Dam, the biggest challenge is finding a routine on campus.

“The challenge is trying to fill out my days and find a ‘routine’ to stick to,” Dam explained. “This whole incident really forced me to take a ‘day-by-day’ approach. I play each day by ear, which has turned this whole month into a gigantic blur as I can only do so much in quarantine. […] Like I’m graduating in three weeks and that hasn’t hit me at all, yet three months ago graduation would keep me up at night.”

RAs are continuing to maintain contact with students, regardless of if they are on campus or not. The decision to remain on campus as a resource was completely voluntary for RAs, and students that chose to do so received a raise in their salary.

In addition to laying out the process to apply for housing, the university set out a set of expectations of living on campus including adhering to prior behavior expectations and being moved to a 14-day quarantine if a student contracts the virus.

“It made me realize that there are a lot of students who do rely on housing here,” said Paul Verras, an RA and a senior majoring in computer science and economics. “And an unexpected situation like this can really throw their plans off, it can really throw their security off because they don’t really know what to do.”

“I think UMass is handling it well. It’s just students want to have more information quicker, or just be able to have reassurance quicker,” he added.

Now, as students reach the end of the semester, some students are worried about what their housing may look like over the summer as travel restrictions continue to limit international students from going home.

“I’m stressed about what will happen in the summer. The University allowed us to stay here till around May 8,” said Hala Shawa, an international student and junior public health and nutrition double major.

“The University didn’t mention anything about what staying after May 8 would look like. If we – international students or students who can’t go ‘home’ – choose to stay here over the summer, we are required to pay $3,000. That is insane.”

Claire Healy can be reached at [email protected] and followed on Twitter @clurhealy.