UMass spring and summer programming adjusted due to COVID-19 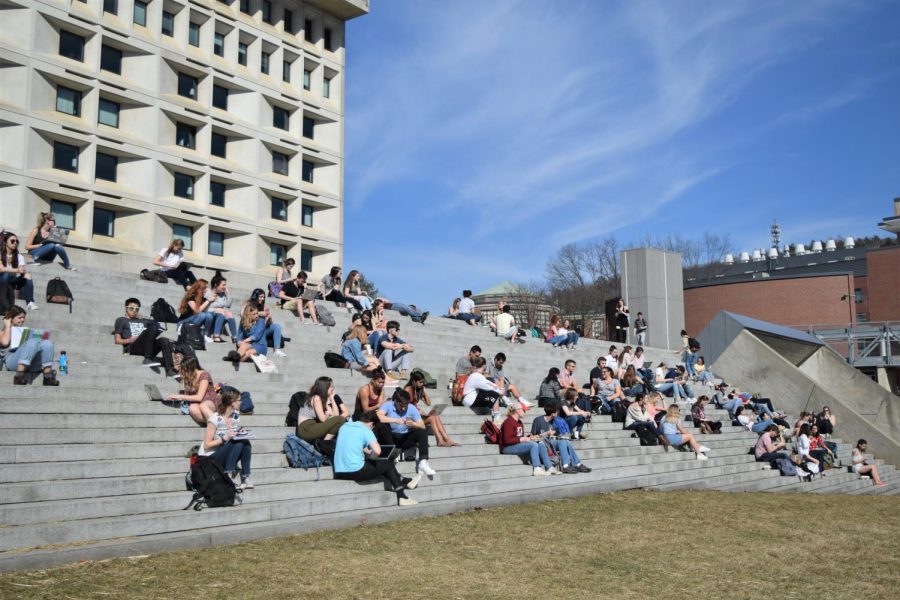 By Kathrine Esten and Aidan Poole

According to an April 8 announcement, the University of Massachusetts has made the “difficult decision” to suspend, cancel or move to virtual its spring and summer programming in light of state and federal restrictions and guidelines concerning the COVID-19 pandemic.

All classes being held by the University during summer 2020 will be held online. All summer face-to-face courses, which are offered through the University Without Walls in Amherst and Newton, have also been cancelled.

James Ben-Aaron, a lecturer in the political science department, said his summer course on constitutional law was already planned to be online before COVID-19. However, he said the content of the course will likely be shaped by the government response to the pandemic.

“I try to be topical with the class,” Ben-Aaron said. The pandemic is “right in the wheelhouse of constitutional law.” With current debates over the tenth amendment and the conflict between state and federal responses, he said “lease powers” will play a bigger role in the course.

“It’s always important,” Ben-Aaron said, “but it’s something so much more important now.”

While Ben-Aaron had not seen a jump in enrollment, he felt more people would be comfortable with online learning after experiencing it in the spring. “Students should sign up for it,” he said. “There’s no better time for [Constitutional Law].”

“Both [online classes and in-person classes] have their advantages, but online people will be familiar with the way it works now,” he added. “Basically, we’re looking for more participation now.”

Eric Forni, an instructor in the Isenberg School of Management, said he hadn’t made any adjustments because his introduction to law course was always planned to be online.

“I think many of my students typically have previously taken online courses, so I hope they are as prepared as usual,” Forni stated in an email.

Alumni Relations has postponed, cancelled or reformatted events through July, including class reunions. Elena Lamontagne, a senior director of communications strategy advancement, stated that class reunions scheduled for the spring will be postponed until later in the year.

“The Alumni Relations staff continues to make plans to allow our alumni to have a wonderful reunion experience,” Lamontagne said.

The 15th annual Sammies, an awards ceremony for registered student organizations on campus, was held using an Instagram livestream on April 17. Scott Bocchio, a leadership and service development coordinator, said “it was definitely a difficult challenge” to preserve the event’s tradition since they couldn’t bring free food or in-person performances to the show like they had in past years. However, Bocchio was determined to give students the recognition they deserve for their extracurricular work.

Despite their challenges, Bocchio said it was widely a success, as he estimates that 200 people “attended” the event through Instagram. Miguel Tejada, a graduate assistant, said it was “great using a streaming service that all students already use” on a regular basis.

Bocchio said the virtual event was made possible by the support of other social media users who helped advertise the Sammies. Although he would have preferred the ceremony to be held in the Campus Center auditorium like past years, he was glad that this year he “didn’t need to worry about certain things” like food preparation or performances.

Admitted student days scheduled for late April were cancelled and the events were moved online. Campus information sessions and tours were cancelled through May 4. New Student Orientation sessions, normally held during the summer, will be hosted in an online format.

All summer camps and clinics, as well as golf tournaments, are subject to change. Events which were planned for the Mullins Center through the end of May have been cancelled, including the Spring Concert. Plans for summer events are still uncertain.

Cirque du Soleil, which planned to present their show “CRYSTAL” from May 15 to 17, cancelled their performances on March 13 in advance of the Mullins Center decision. Ticket purchasers were contacted by email for refunds. Performances in Providence, Hartford and Bridgeport were also cancelled.

“Although this situation results from circumstances beyond its control, Cirque du Soleil apologizes for any inconvenience this cancellation may cause,” a press release from Cirque du Soleil stated. “The Touring Show Division… is currently working on the next visit of one of its shows in each city [where a show was cancelled].”