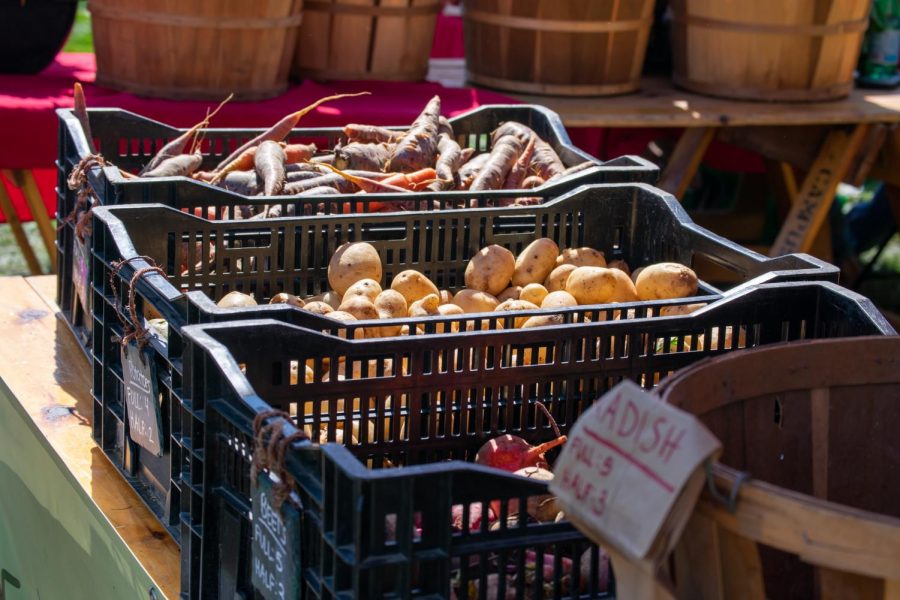 While much of the commonwealth and country have been stopped in their tracks by the COVID-19 pandemic, the UMass Student Farming Enterprise at the University of Massachusetts has continued its preparations for the summer and fall seasons.

The Student Farm, which began in the fall of 2007 in the Stockbridge School of Agriculture, has 12 to 15 students participate in a year-long class, with a summer farming component. In 2020, the farm manages 20 acres of land with 10 acres in production each season. It services an on-campus Community Supported Agriculture share program, Earthfoods Cafe, UMass Dining Services, four Big Y supermarkets and the UMass Student Farmers Market, according to its website.

Amanda Brown, the director of the Student Farm, said the plan is for farmers to return to Amherst by July 1 to move forward with the planting calendar, adding, “We’re hoping that whenever they can return, we will take them.”

While wholesale delivery may be delayed to later in the summer, farm manager Jason Dragon said that there were “no major changes” to the crops the farm is growing, noting seasonal staples like potatoes, onions, winter squash and leeks. Brown added that the students, who have been enrolled in the class since January, are adapting to the pandemic and making the production plan for the farm.

“Our main message we’d like to get out to the campus community is that we’re still here,” Brown said. “We’re still going to be growing food, the show must go on.”

Student farmers involved with the 125-member CSA said they were still selling shares and remaining flexible for new developments in the COVID-19 response.

Lucia Nicastro, a junior agricultural business major, said that even if the fall semester was conducted online, a CSA would still be possible. She added that while CSA shares are usually advertised on campus, the Student Farm has stepped up its social media content on Instagram, Facebook and other platforms. Since the suspension of in-person classes, the Instagram account has run “a day in the life of a student farmer” posts for each member of the class.

Isadora Harper, a sophomore majoring in sustainable food and farming, said that it was “important to think about… how important local farms are [during the pandemic].” She added, “There’s still value in students buying the CSA share and supporting local farms.”

Brown added that the CSA pick-up may look a bit different in the fall than it has in the past. While before, members could come at any time in a set period to select their food from open bins, the CSA may switch to a box share. She emphasized the Student Farm has always adhered to “really strict” food safety guidelines, but new practices may be introduced after COVID-19.

For wholesale delivery to Big Y and other businesses, students have worked on maintaining their professional relationships to the stores in the lead-up to the production season. Toni Graca, a junior sustainable food and farming major, said the Student Farm has been talking to Big Y over email and that the grocery store chain had been very supportive moving forward.

“They still want to work with us,” Graca said. Big Y reached out to the farmers within the first week of the suspension of in-person classes, emphasizing that they wanted to make sure the farmers were healthy and safe.

“We’ve been working with them for seven years,” Brown explained. “They’re happy to work with us to keep things going as much as we possibly can.”

Raina Naylor, a junior who majors in public health, noted that it was more difficult to plan for deliveries with UMass Dining, as they were planning to increase sales and were waiting to hear if students are returning to campus in the fall.

“They don’t really have the information that we need,” added Peter Bruning, a sustainable food and farming sophomore.

The student farmers also talked about the challenges of adapting a hands-on class like the Student Farm to an online format. “It’s been frustrating,” said Alsan Diouf, a sustainable food and farming junior. “But we’re definitely still learning so much.”

Hannah Bedard, also a junior in sustainable food and farming, agreed, saying the pandemic was giving student farmers a different view of how a farm can still work together to produce food in difficult circumstances. “It’s going better than I thought,” Bedard said.

“Things not going to plan is something that happens with farming,” Diouf said. “This is a real farming experience.”