All three players will face big challenges this summer as captains 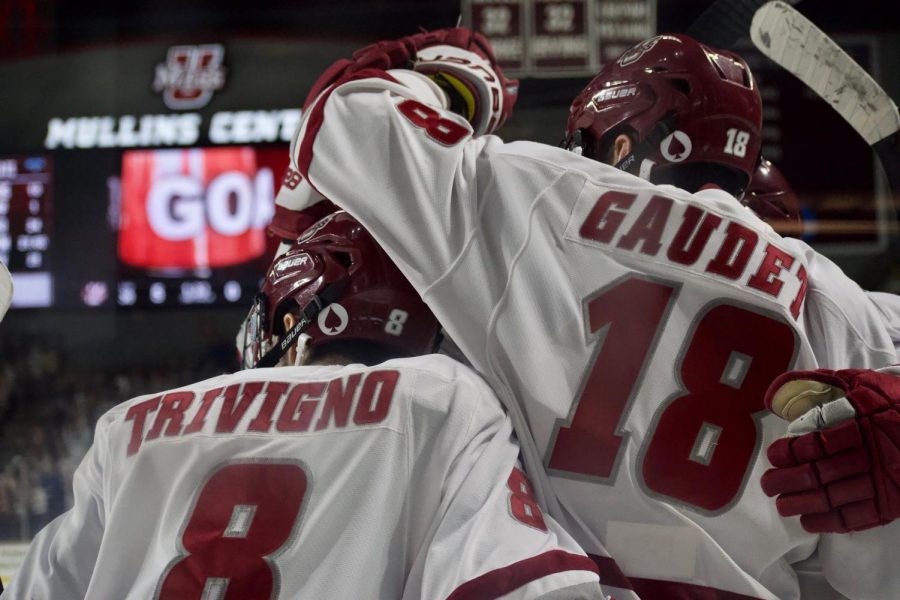 Greg Carvel has already seen what the COVID-19 pandemic can do to one hockey season. He’d like to take every precautionary measure to make sure the virus doesn’t impact another. That’s why picking captains for next season was even more important than usual.

On Thursday, the Massachusetts hockey team announced its plan for captains ahead of the 2020-21 season. Senior Jake Gaudet will wear the “C” as captain, while juniors Marc Del Gaizo and Bobby Trivigno will wear the “A” as assistant captains. The announcement comes a bit earlier than usual, as it’s usually not disclosed until July.

“I think we felt with the current atmosphere with the fact that we won’t be on campus most likely with our team this summer which will be unusual, that the players needed to know what the leadership was, who the leadership was.” Carvel said in a phone call Thursday.

Gaudet is coming off a tough junior year, finishing with a goal and five points in a season hampered by injury. However, the potential is there — Gaudet’s sophomore season saw him score seven goals and 22 points while centering Oliver Chau and Mitchell Chaffee on the first line.

Most importantly to Carvel and the coaching staff is he’s their first four-year captain who they recruited at UMass.

“He’s a kid who we found that we brought in, highly because of his character traits,” Carvel said. “Just watching what he’s done at UMass from being an elite student, for his first two years being a top-line player that we relied on in big situations.”

Even though Gaudet’s junior year didn’t go as planned, the team sees it as a positive in that he learned how to deal with such troubling adversity.

“I think as much as we missed him on the ice, it helped him grow,” Carvel said. “That combination. He’s a really highly respected person by his teammates as well as the staff. He embodies everything that we want in our players. He plays to our identity. Big, strong kid, plays a real honest game. Off the ice, he’s one of the highest character young men that I’ve ever been around.”

Del Gaizo is also coming off a season in which he dealt with some injuries. Despite that, he still put up four goals and 15 points while being the team’s best two-way defender as a sophomore. No. 2 burst onto the scene as a freshman when the coaching staff placed him next to Cale Makar, finishing with 12 goals and 27 points.

Trivigno finished up this past season with nine goals and 20 points playing alongside Jack Suter and John Leonard. When the new assistant captain enters his junior year, he will be without both of his trusty linemates. Not having Leonard on the other side of his trio may prove to be the toughest since the two have played together since Trivigno was a freshman.

Nonetheless, Carvel and the coaching staff feel both Del Gaizo and Trivigno are accurate representations of what they want players in the program to be like on and off the ice.

“To me, what they are, is they’re standard bearers,” Carvel said. “They understand our identity. They’ve played to it. They’ve proven themselves for two years. I think we won 52 hockey games in the two years that they’ve been here. They came in at a unique time where the program was still trying to prove itself and they played big roles in proving of what we’re capable of being as a program. They have that standard. That’s all they know.”

Another aspect Carvel likes of Del Gaizo and Trivigno being assistant captains is their mentality of being undersized and overlooked college hockey prospects.

“They really play to our identity,” Carvel said. “They’re really the kind of kids that when I took the job at UMass, I thought if we were going to be successful, we’d need to find kids like this. Kids who maybe flew under the radar, really high character, good skill level. What they really have is that they play with that edge, they have that chip on their shoulder and those two kids have that.”

These three captains won’t have much time to celebrate. A huge job of their summer will be to help the freshman — there are supposed to be six, according to Carvel — get acclimated to the culture of the team without being on campus.

Usually the team has training on campus during the summer where the freshman can become acquainted with their new teammates. COVID-19 will not allow for that this year.

“They won’t be able to come to campus this summer and learn a lot about our culture,” Carvel said of the incoming freshmen. “Usually it’s mostly from the coaches and interactions with the players but now it’s going to be relying on our captains to really educate and prepare these new guys…Whenever we do get on campus, life’s going to be in a little bit of a tailspin, so the captains have a big responsibility this summer to bring the new kids along but also make sure that, along with the coaches, every player on the team is doing all they can this summer to make sure they’re fully prepared.”

Gaudet, Del Gaizo and Trivigno will face challenges as captains their predecessors never had to overcome. Even with that, Carvel and the team are confident they picked the right men for the job.

Evan Marinofsky can be reached at [email protected] or followed on Twitter @emarinofsky.