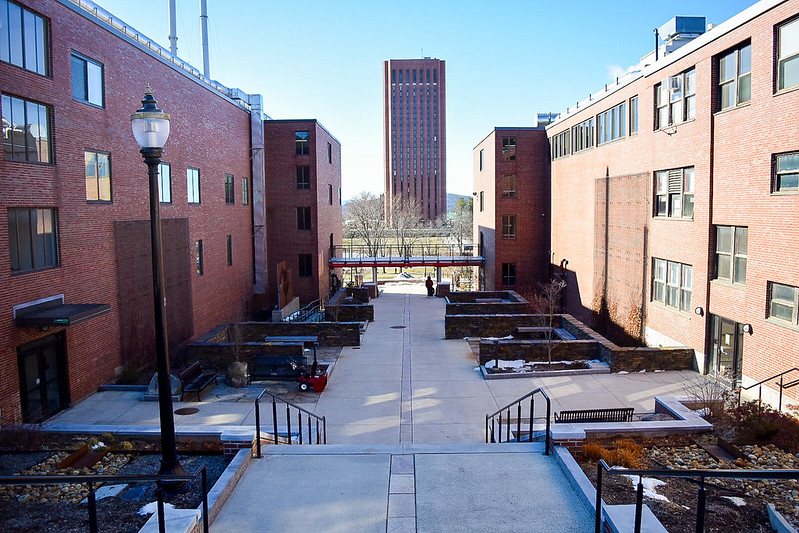 A University of Massachusetts Amherst Spanish class has been translating important community health information from English to Spanish in order to make safety more accessible.

The Spanish Translation for Community Health Services class translated state information regarding quarantine and self-isolation for Spanish-speaking members of the community.

“I am so proud of them. I am convinced that we were able to do this because our class had been built from the very beginning with the spirit that we learned from the office of civic engagement,” said Luis Marentes, associate professor for languages, literature and culture, who teaches the class.

The UMass Civic Engagement and Service Learning (CESL) program offers a variety of courses that emphasize education through community service. Marentes, who was a service-learning fellow himself, shared that the translations were done by students of all backgrounds. But for Hispanic students, Marentes believes that it was an opportunity to be proud of their identity and heritage.

“Many of our Latino students are often embarrassed of their Spanish,” Marentes said. “They’re often told that their Caribbean variety of the Spanish they speak is not good enough. I am very proud that the very first translations were done by heritage speakers with the help of their parents.”

One of the students is Adrelys Mateo Santana, a senior psychology and Spanish double major who is originally from the Dominican Republic.

Although she wasn’t originally in the translations class, she had past experience working with translations and was invited to the project by Marentes.

The students’ hard work and leadership has inspired Marentes. Despite a four-day deadline, Marentes said that the students would finish the translations overnight. For Marentes, the project has not only been transformative, but “the best class I have given in my whole life,” he said.

Zach Sheola, a senior psychology and Spanish major, was one of the first students to take on a project after initially being contacted by Marentes. He began working on the translations and recruited his classmates.

“I felt like I wanted to do my part during the pandemic, and I felt like I couldn’t because I was just here at home,” said Sheola, who hopes to go into a career of social work.

The class first got involved when Marentes was contacted over spring break by Jocelyn Langer, a UMass comparative literature alumna who works for the Pioneer Valley Worker Center (PVWC).

Langer was initially looking for “funding to translate unemployment information” when she was made aware that the class was looking for a new project after COVID-19 disrupted their last one.

“I wasn’t originally looking to collaborate with his students specifically, and then it came up in the course of conversation that their project had ended,” Langer said. “They were looking for projects so then I put them on my radar for health-related translations.”

Langer, who graduated with a masters in translation studies from UMass in 2016, had previously worked with Marentes while working on her thesis.“Luis was a member of my thesis committee, so I had worked with him when I was a student there and I had visited his class,” Langer said.

She also worked with different translation classes at UMass over the past couple of years, one which was taught by professor Cristiano Mazzei, who teaches an interpreting class.“I have been working with students from Mazzei’s class for the past three spring semesters,” she explained. “Some [students] have been interpreting, and some have helped us edit training materials or texts.”

Langer believes that the collaboration with the class is not only beneficial for the community but also for students who can use the opportunity to shadow professional interpreters and translators.

“It can be a really great learning opportunity for them. Interpreting can be a very scary thing to jump into. It gives them a feel for what interpreting professionally feels like,” Langer said.

Langer has extensive experience with translating — her previous role at PVWC was to train bilingual interpreters to answer the phone on a 24-hour hotline for emergency workplace and immigration issues.

But in communities like Chelsea, the COVID-19 pandemic has shown both the strength and the inequality that exists in lower-income communities. Chelsea’s population is 65.9 percent Hispanic with a poverty rate of 19.5 percent and coronavirus rate of infections that is six times the statewide average.

“Minority groups are more likely to be part of communities with less resources,” Mateo Santana said.

To fight the pandemic, the community has come together to deliver food and essentials to essential workers, who, according to Marentes, often don’t even have the opportunity to vote.

“We see, for example, that Chelsea, a city that is mostly Latinx, has gotten hit really hard by the virus,” Sheola said. “I think this demonstrates the intense health disparities that this country suffers from, and the consequences of not making more resources available to communities that have a lot of people of color who might not speak English as a first language.”

“Ultimately, the lesson that has guided us all along is not only to find problems, but to also identify the assets of the community,” Marentes said.