"She definitely created an atmosphere of welcome" 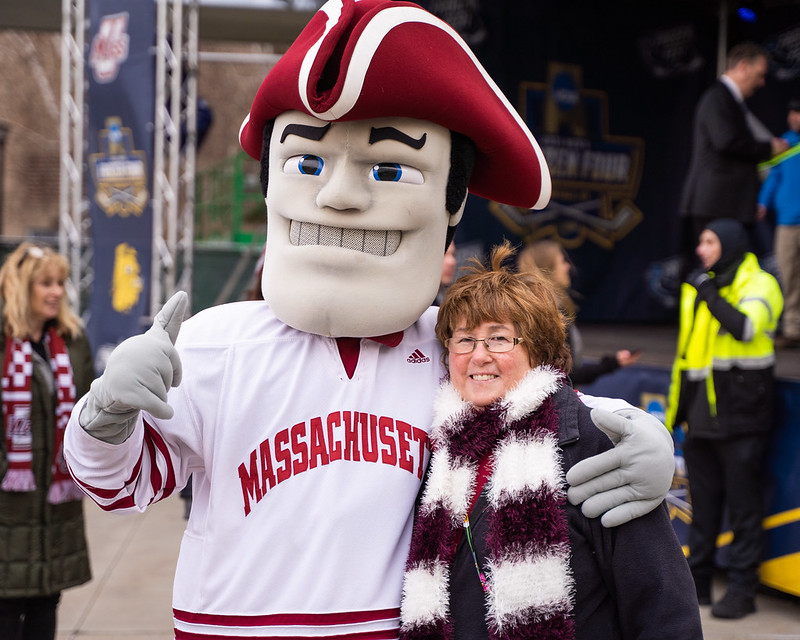 Nothing makes a place feel like a “home away from home” like good food. When asked why they came to the University of Massachusetts, it’s not uncommon for students to mention the dining halls in their responses.

One of the key people responsible for making the cafeteria food taste like home cooking is UMass legend Joanne Keller, affectionately known as the “Omelet Lady” by her fans at Hampshire Dining Commons. When students return to campus in the fall, however, they will have to do without Keller’s excellent cooking. The COVID-19 pandemic has changed campus life for returning UMass students in many unpredictable ways, including is Keller’s retirement.

On July 14, Keller’s Twitter and Facebook accounts were buzzing with students, graduates and university employees congratulating her on her retirement and mourning the loss of her renowned omelets. While congratulations had to be remote, Keller’s fans made sure to let her know that she would be missed.

Keller started working at Hampshire DC in 2007, and since then she has been shaping the lives of students at UMass with her friendly demeanor and delicious cooking.

“After transferring to UMass for the journalism program, I very quickly learned that Joanne, the omelet lady, was the most popular woman on campus, and I looked forward to her making me breakfast every single day,” said Alexandra Francisco, a 2017 UMass graduate who works as a content producer for NESN.

Keller had a reputation for going out of her way to make students feel special. Keller made a point of keeping track of birthdays and would make a special omelet to celebrate.

“On my birthday senior year, she was finishing my usual order up by the time I was walking into the dining hall, and she put a candle in it, too,” said Francisco.

The celebrations extended to the staff as well as the students. “If the morning staff had a birthday, she was definitely one to make sure everyone knew about it,” said Selina Fournier, manager of the Hampshire DC. “The older you get, the more you try to hide your birthday. But if Joanne found out, for sure it would be an omelet celebration.”

“I had a little birthday hat, so if I found out it was your birthday . . . I’d make you wear the hat, and I always would sing to you and put a candle in your omelet,” said Keller. “I did it up until the day I left, basically.”

Keller’s festivities weren’t limited to only birthdays. She took it upon herself to make sure Halloween was a special occasion in the Hampshire DC, too.

“Joanne would go off and create a [costume] theme of her own for the morning people coming in,” said Fournier. “She started that tradition, and she would hand-make the costumes. She wouldn’t usually tell me the theme until I arrived, and it was always something I looked forward to. Mermaids were a theme one year. One year she had the ‘O-team’ as she called it, and made hats that looked like pans with omelets in them. She always came out with the most creative ideas.”

Keller also had a close relationship with many UMass athletes, as they would always be at the dining hall early in the morning.

“Andy Isabella, he was a 2018 graduate, and he was on the football team, you know, he plays for the Arizona Cardinals now,” said Keller. “He came in every day at 7 a.m., and he always wanted a ham and cheese omelet and, after a while, he just wanted the ham and no cheese. I would see him coming up the stairs and going to the cashier, and I’d already be cooking his omelet. So those special touches always put a smile on somebody’s face.”

Keller wasn’t always the renowned “Omelet Lady” that she is today. She gained the title when she took over one of the least popular jobs among the dining hall staff.

“The omelet line was really only four burners, very simple, but we cooked about 50 omelets a day or something and none of my coworkers really wanted to do that,” said Keller. “You know, I loved being out on the line, directly with the kids, so they kind of voted me to be the omelet cook. That’s kind of how it started back in 2008.”

Over the years, Joanne created a reputation for making Hampshire a fun place to work and dine.

“She always was just so happy to be there, and I was so happy to have her work with me,” said Fournier. “She would always be at the sector of that omelet station, possibly with four or five omelets going. Every time, whether I walked up the front stairs or came through the kitchen, I will never forget her raising her hand, usually with an omelet on [the stove], waving at me, and if it wasn’t the omelet mitt [in her hand], it was the spatula. She definitely created an atmosphere of welcome.”

Francisco suggested that UMass “retire her apron in the Mullins Center up there with Cale Makar’s and Marcus Camby’s. It would be cool for her to see it when she comes back for games and country concerts.”

Keller decided to retire to keep safe amidst the pandemic and because the long days on her feet had begun to get tiring. While she doesn’t have any major plans to travel because of the virus, she is looking forward to spending some time at home with her husband and to catching up on some household projects.

“The time was right, and it all fell into place,” said Keller. “It still hasn’t hit home yet.”

With Keller’s departure, Hampshire may feel a little less like home to returning students next semester, but her legacy at UMass will live on through the students, staff and graduates who she’s impacted over the years.