UMass updates campus community with ‘extensive preparations’ for the fall 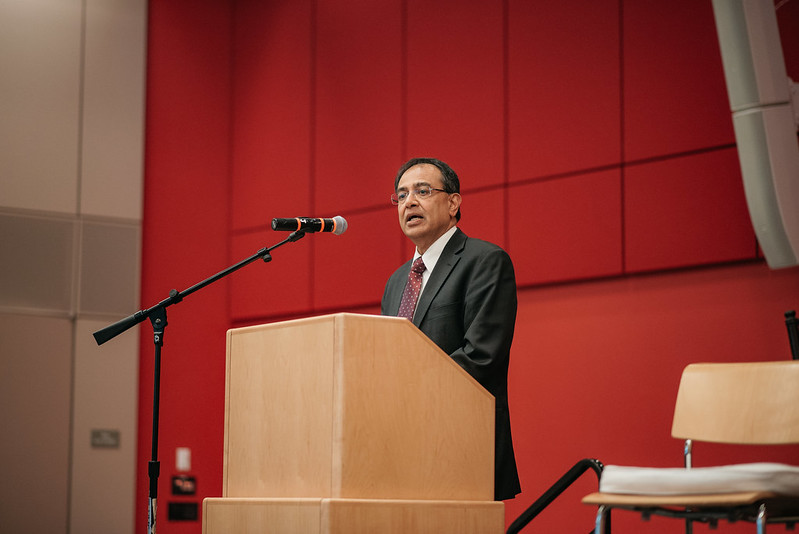 By Cassie McGrath and Irina Costache

University of Massachusetts Chancellor Kumble R. Subbaswamy released “extensive preparations” regarding fall campus reopening plans through an email to the campus community on Monday. The email included updates on the University’s plan for widespread systematic testing and the expectations for returning student responsibilities.

The University released its fall plans on June 29, which were updated Monday to “include a comprehensive set of COVID-19 testing protocols and a commitment to healthy behaviors that applies to students living in residence halls as well as those choosing to rent properties in Amherst and nearby towns,” according to the Office of News and Media Relations.

The email reads, “life on campus during fall 2020 will not be anything resembling normal college life. The public health risk from the pandemic is real. To meet this challenge, we are adopting a comprehensive set of testing protocols and a commitment to healthy behaviors that applies to students living in residence halls as well as those choosing to rent properties in Amherst and nearby towns.”

According to Subbaswamy during a press briefing this afternoon, the number of students returning to live on campus is “exactly where we wanted to be.”

In the email, the chancellor detailed that the University is “adopting practices that go well beyond federal and state recommendations.”

All students living both on and off campus will be required to take a COVID-19 test upon or before arrival.

According to Jeffrey Hescock, executive director for emergency management, the University has partnered with the Broad Institute to administer testing to those that are asymptomatic upon arrival, and the tests will have a one-day turnaround time.

For those opting to take a test independently prior to coming to campus, they will be required to show a negative test received within the last 72 hours.

The University has set aside quarantine space for students who are coming back to campus from any of the 42 states identified by Gov. Charlie Baker in the Massachusetts 14-day self-quarantine directive.

Though the current Centers for Disease Control and Prevention guidelines do not recommend testing anyone who is asymptomatic without known exposure to COVID-19, the University is “committed to spending millions for additional testing, plus investments in staffing,” the email stated.

During the press briefing, Subbaswamy said the University is expected to have the capacity to administer 14,000 tests per week. These include both symptomatic and asymptomatic tests, to be conducted by UHS and Emergency Management.

The testing will be self-administered, but observed, using a nasal swab test.

Of the costs, Hescock added that the University is “not going to let anyone not get tested.”

“For symptomatic testing — i.e. A student has a fever, chest pain, chills, muscle aches, etc. — the student’s insurance will be billed. UHS has not had anyone’s insurance denied yet for this testing.” Hescock added via an email from Mary Dettloff, deputy director of News and Media Relations. “For asymptomatic surveillance testing, the university is covering the cost.”

As part of the UMass Agreement for returning students, on- and off-campus students will have to comply with conducting daily self-monitored screenings and taking part in weekly surveillance testing.

The daily self-screenings will consist of a daily checklist where students will monitor themselves for symptoms and report for testing if need be.

The weekly surveillance testing, according to Monday’s email, will be required of “all students living in residence halls as well as off-campus students who have face-to-face classes or a campus meal plan.”

This testing will take place at the Mullins Center and will be staffed with “volunteer faculty and students from the College of Nursing and School of Public Health,” according to Dettloff.

The University also plans to implement adaptive testing, which according to Hescock, means that “if we start to see any symptoms, if we start to see a growing trend anywhere of anything, we’ll shift our focus and then bring those individuals in to get tested, and that doesn’t matter if they’re on or off campus.”

Living on campus / off campus and student life

The University is expecting about 60 percent capacity in the residential halls. According to the email, the University sees “no indication of beyond-normal demand for rentals in Amherst. To date, the reopening plan’s strategic approach to reduce the overall student population is on track.”

Despite the “extensive” protocols, the University statement reads, “However, we all recognize that a high incidence of COVID-19 could develop during the semester, and we may be forced to shift to an entirely remote mode of operation, with the closure of residence halls and campus facilities.”

According to Hescock, UMass is working with epidemiologists to create a “UMass-specific dashboard” to help inform their decision-making on a daily basis and establish contingency plans.

Though the University hopes to avoid a situation where an early move-out has to happen, Hescock stated there is a “planning group right now that’s underway of looking at what those contingency levels are and using the best science and the best public policy that’s available.”

Amherst Town Manager Paul Bockelman also sent a letter to Subbaswamy on July 10 voicing concerns about the Amherst town community being put at health risk by UMass’ decision to reopen.

Subbaswamy said that he was “caught off guard” by the letter because the University had been in continuous “communication and consultation” with the town.

“Officials meet weekly with the Town Manager and the officials and when we released publicly the document about our planning, that was available to everyone in the community and we got feedback from everyone,” Subbaswamy said. “It’s been a very public process.”

Though there have been concerns about how strictly students will adhere to rules and guidelines, specifically with regards to off-campus students, the University shared confidence in the student body during the briefing.

“Any portrayal of our students as somehow irresponsible entirely or as the ones who don’t care about public health, I think, is really an exaggeration,” Subbaswamy said.

University officials also said during the press briefing that they plan to use education as the main way of encouraging and enforcing safe living practices before reverting to punitive measures.

“For us it starts from a place of education first and helping students understand what we expect. And then working with them if an issue crops up, we have different ways that we can help address that,” said Brandi Hephner LaBanc, vice chancellor for Student Affairs and Campus Life, during the press briefing.

Hephner also added that the University will be relying on its strong relationship with the town of Amherst to ensure safety.

“Literally everything comes back to that strong relationship I think that exists with the town, and the protocols and shared communication and working together to just solve the issues,” she said.

“We have weekly meetings where we bring together representatives from various departments across the campus and Student Affairs and Dean of Students, and we go live with the organizations in town, and we talk about any issues that may be arising. And what has been most effective in this is building those relationships and that trust and so that when we get confronted with something like this, like COVID-19, we are really very well prepared to respond to it as partners, and to work on it together,” added Nancy Buffone, associate vice chancellor for University Relations.

On Monday, the UMass Board of Trustees voted to freeze tuition rates for in-state undergraduate and graduate students for the 2020-21 academic year. According to Subbaswamy, “we would need about a two-and-a-half percent tuition increase to meet our necessary obligations.” He continued, “we understand that the families, the students and their families. Many of them are losing jobs, certainly losing incomes and so to be sensitive to what’s going on in society. There’s a reflection of reality of the economic consequences of a pandemic. But yes, it does hurt our overall financial viability. No question.”

Many students have raised concerns about a lack of on-campus jobs, as many depend on working at UMass to pay for school. According to the University, teaching assistants will still be employed and work-study options will still be funded by the federal government. However the chancellor said other businesses, such as Blue Wall, will not be employing as many students due to a lack of need.

The University is also functioning at a deficit. According to Subbaswamy, “of the personnel related savings which I said is about half of that money, not all of the details have been worked out about half of it has come from freezing vacancies from the voluntary separation and so forth, excluding layoffs.” UMass currently has a gap of $30 million, “unless the state comes up with more money or the federal government comes up with more money.”

If it cannot find the $30 million, the University may have to proceed “with layoffs, because all other measures have been pretty much taken,” according to the chancellor. The $40 million deficit from the last fiscal year was resolved with a week of furloughs which, according to Subbaswamy, prevented layoffs.