The Minutewomen will hold BLM events throughout the upcoming season 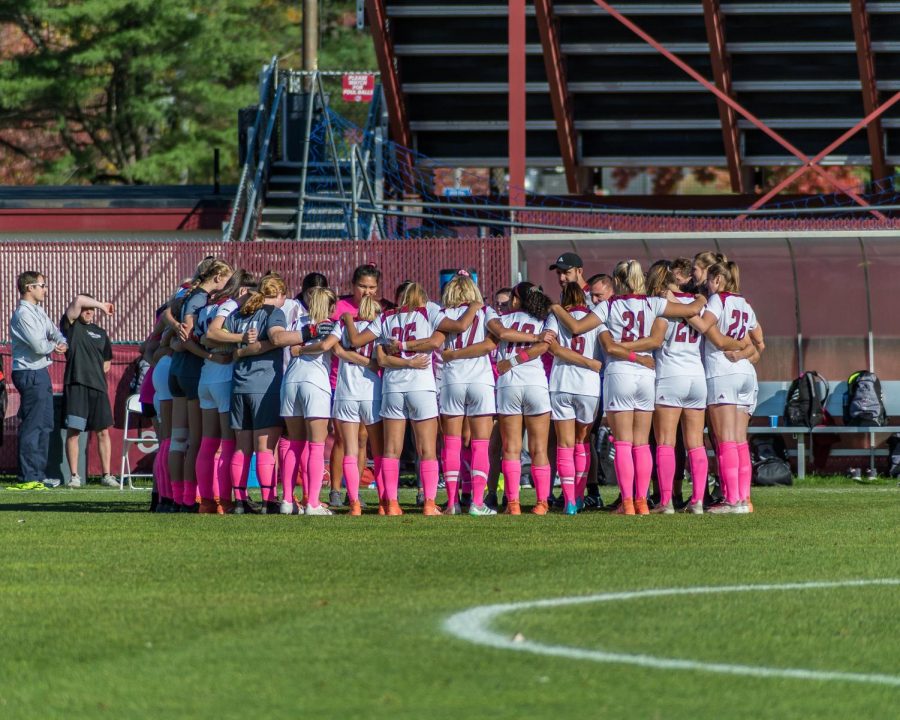 On May 25, George Floyd, a 46-year-old Black man, had the police called on him for using a counterfeit $20 bill at a local convenience store in Minneapolis. Nearly 17 minutes later, Floyd was left lifeless as police officer Derek Chauvin detained him by forcefully pushing his knee to Floyd’s neck.

Floyd’s death sparked outrage as peaceful protests began to develop across the country, shedding much needed light on the Black Lives Matter movement. The movement stands for not only a response to Floyd’s death, but as a call for racial equality, a human right African Americans have been seeking for generations.

The crisis opened the eyes of many Americans who have learned the true extent of racial inequality in the United States. Massachusetts women’s soccer coach Jason Dowiak believes that the movement is a perfect time for himself and others to reflect on the incidents and learn how to prevent them in their local communities.

“It’s honestly hard to put into words,” Dowiak said. “These issues have obviously been going on for so long but the intensity of this movement in particular and its momentum is actually what I feel is something that’s truly different from anything I’ve experienced in my life in a great way.”

During recruitment, Dowiak feels like he hasn’t identified a bigger pool of players that can contribute to the program. Recently, the coaching staff has talked about having a greater purpose on identifying players of color that could enhance the Minutewomen in more than just soccer.

“I’ve been reflecting a lot over the last few weeks or so on how I’ve personally missed opportunities over the years, especially in coaching positions, to impact greater change,” Dowiak said. “Now I’m personally driven to do everything I can for our players.”

The Minutewomen have one Black player in their program, Fatou Barry. Barry said she believes focusing on the positives of the movement will help provide people with the right outlook on what this movement represents.

“Going through the media, you see a lot of negative things, and it can drag you down and be emotionally overwhelming,” Barry said. “People are definitely bitter and angry, but good things will come out of this and we need to just keep fighting because there are a lot of things that need to be taken care of.”

During Zoom meetings with the team, Barry has spoken about her own experiences dealing with racial inequality to help educate her teammates and coaching staff about the Black Lives Matter movement and how they can support the cause.

“In lifting up our one African American player and listening to her experiences and ideas we’re learning how we can be better allies to support her and the entire Black community in a much more blatant way,” Dowiak said.

As a result of the conversations UMass has been having with its players, Dowiak feels more players will be willing to share negative experiences. One of the Minutewomen’s biggest goals in having the talks are increasing players’ trust in the coaching staff and having staff be reliable resources if a player ever needs to talk or feel protected.

“There hasn’t been anything directed at any of my players,” Dowiak said. “In talking with them and learning about their experiences, there have been inconsistencies with how they’ve been treated by professors and getting the resources they need.”

Walking into a 300-level classroom surrounded by only a handful of Black students, Barry says she almost feels out of place. With stereotypes judging Barry’s every move, she feels like she has something to prove to gain respect from the people around her.

“Personally, I haven’t been discriminated against by a teacher,” Barry said. “However, I feel like when I go into a classroom I have to work twice as hard or really just focus on doing the right thing and articulating myself because I’m usually one of five, or the only, Black girl in my classroom.”

One of the many struggles Black people face in the United States is their voices being silenced, which has contributed to the struggle for civil liberties for Black Americans. With this in mind, Dowiak plans to ensure that all of his athletes have an equal opportunity to voice their opinions on changes to the program this upcoming season.

“I think the biggest thing I can do as a coach is give every opportunity for our student-athletes to be supported and to feel like they have a safe space to share their feelings and ideas,” Dowiak said. “Because of our platform as white coaches, we often are listened to more or heard differently and have an opportunity to use our privilege to turn up the volume on what the Black community is saying and what we’re witnessing now because of social media and the news capturing everything before our eyes.”

Forward Lauren Bonavita sees UMass as a diverse place with equal opportunities, but says its campus does not represent the entire country. By setting an example, other programs can build off the work UMass has put in to create this type of community and create one of their own.

“UMass has been a diverse and inclusive environment,” Bonavita said. “I am sure that is not everyone’s experience, but I can only speak for mine. Obviously, there must be a change because there is inequality and discrimination in our society.”

UMass’ athletes focus on learning about people’s backgrounds and creating a community amongst its athletes. During the offseason, the Minutewomen build their relationships by listening to sports psychologists and sharing their own stories about their culture and upbringing. The student athletes believe that looking beyond the athlete and taking the time to know someone on a personal level, you’ll want to do anything for them.

“The athletic community is a very diverse community that includes athletes from all different backgrounds,” Bonavita said. “Being a part of the UMass family and soccer team has been a great experience. The coaches have created a family atmosphere that stresses relationships and teamwork. Jason [Dowiak] challenges us every day to be the best version of ourselves in the classroom, on the field and in the community.”

The Minutewomen have begun self-educating through the Ally 2 Action organization. The team will participate in a 21-day anti-racism program. Players will receive articles or videos in their email that help provoke thought and develop conversations.

“All of us need to have more conversations with our family and immediate community and friend groups because we feel a little more in the trenches,” Dowiak said. “We care so much about our Black student athletes at UMass but not everybody else is seeking out the information to the extent that we feel we are and that we as a coaching staff encourage our players to. We’re pushing for consistent conversations so that we can get beyond the uncomfortability.”

Growing up in Bayshore on Long Island, Barry sometimes felt like an outcast. With a lack of representation in her hometown, Barry found it hard to find inspiration when there was no one that looked like her in a particular position. However, Barry’s parents pushed her, telling her to use her skin color as a tool and that it should never be something to be ashamed of.

“You have to learn how to persevere,” Barry said. “Racism is systematic, but a system is made up of individuals, so we have to educate ourselves and learn how to do better.”

The UMass administration has brought in sports psychologists and prominent Black speakers to speak with coaches to address different ways they can connect with their team mentally and talk about the situations going on in the country.

“Early after the George Floyd incident and subsequent protesting our administration brought all of the head coaches together along with Dr. Walker, our vice chancellor for inclusion and diversity, to talk about the resources we have for the Black community on campus,” Dowiak said.

UMass has begun its advocacy by participating in the Run For Black Lives Matter, an event where participants do cardio for eight minutes and 48 seconds, the duration of time Chauvin kept his knee on Floyd’s neck. The Minutewomen also took their protests to social media on Juneteenth, where Dowiak and the UMass squad read the poem “Caged Bird” by Maya Angelou. The poem represents Angelou’s confinement as an African American in a racist and oppressive society.

The team has made plans to continue its efforts to support the movement this upcoming season by hosting events during its home games.

“We started talking about some different ways during the season where we can do a Black Lives Matter game, similar to a breast cancer awareness game, but supporting anti-racism and equality,” Dowiak said. “We’re talking about some way of honoring the cause on a pregame shirt, practice shirt, or jersey, that shows our support of the movement.”

Dowiak intends on supporting the BLM movement as long as possible and encourages people to keep the movement as relevant as it has been so far.

“We are going to continue to do something as frequently as we can,” Dowiak said. “We’re not seeing the social media drop-off or lull after the intensity of the movement initially, but we’re still going to connect with the community in a way to educate people and pass on information through our team and social media accounts by getting out in front of the public.”

Barry said she believes the movement will slow down eventually, but she will continue to spread awareness on social media to circulate her ideas throughout the UMass community. Barry also intends on visiting lower-income communities and speaking to younger students about the movement, expressing the importance representation has on how minorities are viewed by society and how they view themselves.

Dowiak has made it his mission to surround himself with the proper resources to teach himself the importance of this movement and how he can relay the messages he learns to his teammates to help build a stronger and more equal community.

“Be willing to put aside what you think you know and what you’ve learned in school over the course of growing up because the information that a lot of us, especially white people, have been presented with is incomplete and inaccurate a lot of times.” Dowiak said. “Be willing and open minded to new information and then be willing to say with this new information, ‘I’ve changed my opinion.’ I think the only way we can change is to get better educated.”

Kevin Schuster can be reached at [email protected] and followed on Twitter @kevineschuster.