The employees will be placed on indefinite furlough effective Sept. 13 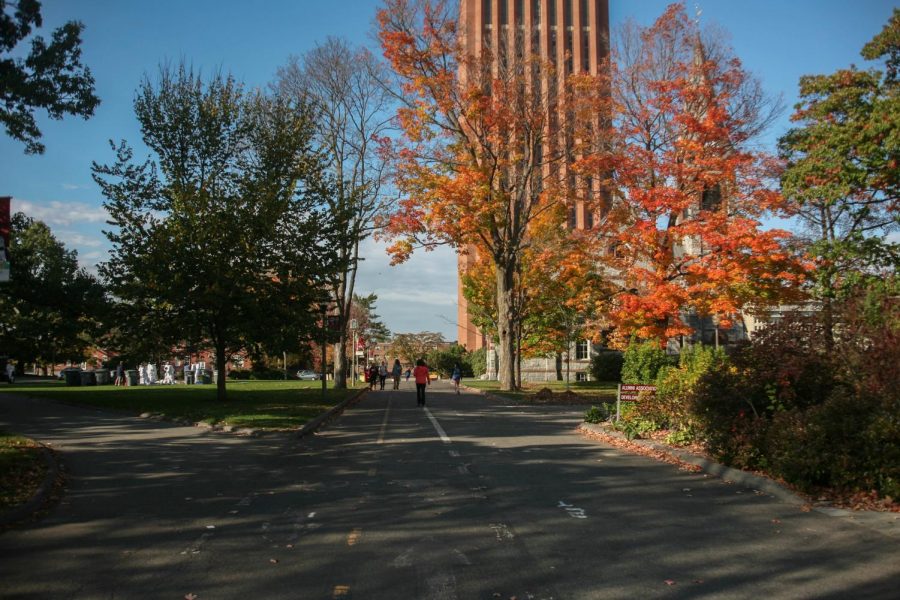 By McKenna Premus and Cassie McGrath

The University of Massachusetts will furlough nearly 850 employees indefinitely, according to an email from Chancellor Kumble Subbaswamy to the campus community on Thursday. The message followed the announcement of a projected $168.6 million loss in the campus’ operating budget this year.

The fall semester losses include $67.4 million in housing and dining revenue, a projected $30.6 million decline in tuition revenue and a $20.9 million reduction in other revenues, which include grant and contract overhead income, according to the statement.

The University is expecting to spend $13 million in virus testing, safety, isolation and quarantine measures.

“In dealing with this loss of revenue, we are guided by three main priorities: (1) maximize the safety and health of the university community; (2) ensure the academic integrity and quality of our educational programs; and (3) minimize layoffs and furloughs of our permanent employees,” the chancellor wrote.

Through hiring freezes and the voluntary separation incentive program, in addition to deep cuts in discretionary spending, pay cuts for senior campus leaders and trustee-approved access to the operating margin, the University “identified $120.8 million in savings to address the shortfall.”

Despite the changes, the University was left with a $47.8 million deficit.

“After implementing a series of previous cost-reduction measures, the Chancellor concluded that the only way to address such a substantial deficit is through workforce reductions. The staff reductions, [the chancellor] said, are an absolute last resort and the result of agonizing decisions,” said Ed Blaguszewski, executive director of strategic communications and special assistant to the vice chancellor for university relations.

In the statement, the University said it began “with those job functions that cannot be performed remotely and for which there is no work due to the minimal number of students residing on campus.”

“After lengthy and productive negotiations with the AFSCME labor union, nearly 850 of our valued colleagues, including dining hall workers and residence hall operations staff, will be placed on indefinite furlough effective Sept. 13, 2020,” said Subbaswamy.

“Because their union representation agreed to a furlough rather than a layoff, they will retain their UMass benefits, including healthcare, while still being entitled to unemployment benefits,” said Subbaswamy. “This agreement will also enable a smooth re-employment process when the campus resumes normal operations.”

According to Subbaswamy, “some permanent layoffs are expected in the coming weeks,” and the University is in discussions with other staff labor unions “with the hope of reaching an agreement that prioritizes temporary reductions in hours and furloughs, which will likely impact approximately 450 additional campus employees.”

“We are hopeful that an agreement can be reached and that the number of permanent layoffs, both unit and non-unit, can be minimized,” said Subbaswamy.

“It is with a heavy heart and extreme sadness that we must regrettably inform you that this week the University of Massachusetts/Amherst is temporally furloughing off approximately 780 Local 1776 bargaining unit members for at least the rest of the semester,” said LeeAnn Robinson, president of AFSCME Local 1776, in a letter to labor union members.

According to Robinson, if the labor union did not accept the University’s offer of temporary furloughs, union members would be laid off without benefits.

“Despite the local pointing out hundreds of mistakes on the list, the University insisted that notification to members go out this week,” said Robinson. “Local 1776 was forced into accepting furloughs. We were told that if we did not accept ‘temporary’ furloughs our members would be laid off and lose all benefits.”

One University employee, who spoke under the condition of anonymity for fear of losing her job, was informed of her furlough by email during an interview with the Daily Collegian nearly three hours after Subbaswamy’s announcement. While she acknowledged that the furlough is temporary, she said she is concerned that it might turn into a permanent layoff.

“The people who think more with their wallets than with their hearts should reconsider their morals, and think about all of the families, the people who have to pay rent, car insurance, health insurance, groceries, just a way of living,” the employee said. “Not all of us can afford a fancy house.”

She said she felt “scared” and “upset” upon hearing about the announcement.

“I have a lot of uncertainty of what’s going to happen next,” she said. “I understand the financial issues that [the University] is having, but they can totally move money around to other places.”

“We are hopeful that an agreement can be reached and that the number of permanent layoffs, both unit and non-unit, can be minimized,” the statement read.

In addition to the members’ ability to collect unemployment, “the furloughs will be by seniority with job classification with exceptions only if agreed upon by both parties,” according to Robinson.

While members can decide to take a layoff in place of a furlough, members “will not be able to use accrued time except to cover the members portion of the health insurance costs,” and “tuition remission will remain in effect for the duration.”

Even in light of the furloughs, the University expects to face a $20.3 million deficit, according to Subbaswamy. The University projects a $168.6 million loss in the campus’s operating budget, “presenting our campus with one of the greatest financial challenges in our 157-year history,” he wrote.

The statement addressed the question of why the University cannot use reserve funds to address our budget shortfall:

“First, because the [U]niversity operates under a very tight budget each year, we do not have significant unallocated reserves. Our reserves currently meet the [U]niversity’s obligations for a five-month period, considered barely adequate for a healthy balance sheet. Further, it is unclear when our revenues will return to normal levels, so depleting our reserves to avoid short-term pain may imperil our longer-term stability.”

“We will continue to forcefully advocate with the state and federal governments for support to help stabilize the campus budget and prevent more personnel cuts to make up that deficit,” said Subbaswamy.

McKenna Premus is an Assistant Social Media Editor and can be reached at [email protected] Follow her on Twitter @mckenna_premus.

Cassie McGrath is the News Editor and can be reached at [email protected] Follow her on Twitter @cassiemcgrath_.