UMass football preparing to play in fall despite COVID-19 concerns

Minutemen have had three scheduled games canceled so far 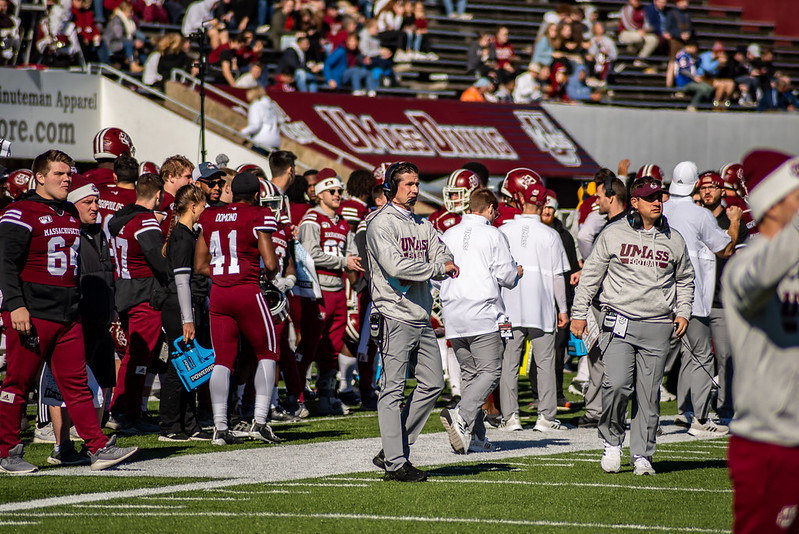 Though the unprecedented COVID-19 pandemic has raised concerns over the status of the college football season, the Massachusetts football team is still preparing to play this fall.

With Power Five conferences across the country — including the Big Ten and SEC — moving to conference-only play, and with fellow New England independent UConn becoming the first FBS team to cancel its entire 2020 football season, the state of the Minutemen season seemed to be in jeopardy. However, as training camp kicked off this past week, UMass officials asserted that the team would do everything in its power in attempt to safely play this fall.

“We are very hopeful and continue to prepare as a program and a department as if we’ll be playing football this fall,” UMass Athletic Director Ryan Bamford said Wednesday.

While the current decision is to play the season, the team will continue to monitor the safety protocols and decisions outlined by state governments, other teams, and the NCAA.

UMass has seen the changes impact its schedule, as the Minutemen were scheduled to play UConn in the season opener on Sept. 3 prior to the Huskies’ season cancelation. Week three opponent Albany had its season canceled by the Colonial Athletic Association, and week 10 opponent Auburn was included in the SEC’s move to a conference-only schedule.

The Auburn game cancelation could prove critical for the Minutemen, who were to take home $1.9 million in contract money for playing the SEC giant. There has been no resolution to what will happen to this contract yet.

“The contract is written in a way where any good lawyer can interpret it in a number of ways,” Bamford said. “We’re in discussions with Auburn and I think we’re waiting to see where some nuts and bolts get placed.”

The three canceled games leave three openings in the UMass schedule—pushing the season opener to Sept. 12 against Troy. As of now the Minutemen will have two weeks between their season opener and second matchup at Appalachian State. However, UMass is monitoring the situation and taking calls to fill in the schedule openings but doesn’t know if it will play a full 12-game season.

“It’s been an advantage as an independent to maneuver around some things,” Bamford said. “We ultimately will be able to make our own decisions on the competitive environment for this fall. If college football is going to be played, I think we can find some opponents to fill out the schedule.”

UMass’ status as an independent also allows them to flex their season to the spring if needed, added Bamford. Notably, the Minutemen have been in contact with Boston College about scheduling a replacement game, but nothing has come to fruition as of yet. A matchup against BC would likely only come if the Eagles fail to play their scheduled game versus Ohio.

As of Aug. 5, the Minutemen had conducted 488 COVID-19 tests with one positive test, which occurred upon a player’s arrival. The Minutemen have implemented a slew of precautionary protocols at team facilities to prevent the spread of the virus.

Players are screened for temperature and pulse oximetry at the door, and hand sanitize from fingertip to elbow upon arrival. Inside, masks stay on at all times while players and coaches remain socially distant. All equipment is disinfected after each use with frequent water and hand sanitizing breaks. Face masks are fitted with face shields, and players wear gators on their neck in case the helmet comes off. Coaches also wear face shields and gloves during practice.

“Just to get into the building is kind of like getting into Fort Knox,” head coach Walt Bell said. “But again, [practice] is a really small part of the day. Our kids have done a great job away from this building, and I’m really proud of them.”

With health restrictions in place, UMass has also had to adapt the way it practices. Limiting close contact between players may hinder the Minutemen from participating in some drills. However, Bell has emphasized the importance of the mental aspect of the game in its absence.

“There is still plenty of football you can learn while having very limited team reps,” Bell said. “We can still do plenty of things to keep our kids safe, but also allow them to learn to play the game.”

“[The pandemic] is a great lesson in controlling what you can control,” Bell said. “To really be where your feet are and squeeze every ounce out of every day, and just having a gratitude every single day. It’s hard, but these are the cards we were dealt, and we have to go play them.”

Dan McGee can be reached at [email protected] and on Twitter @TheDanMcGee.