All My Friends: Lessons from living with four strangers during a pandemic

Where are your friends tonight? 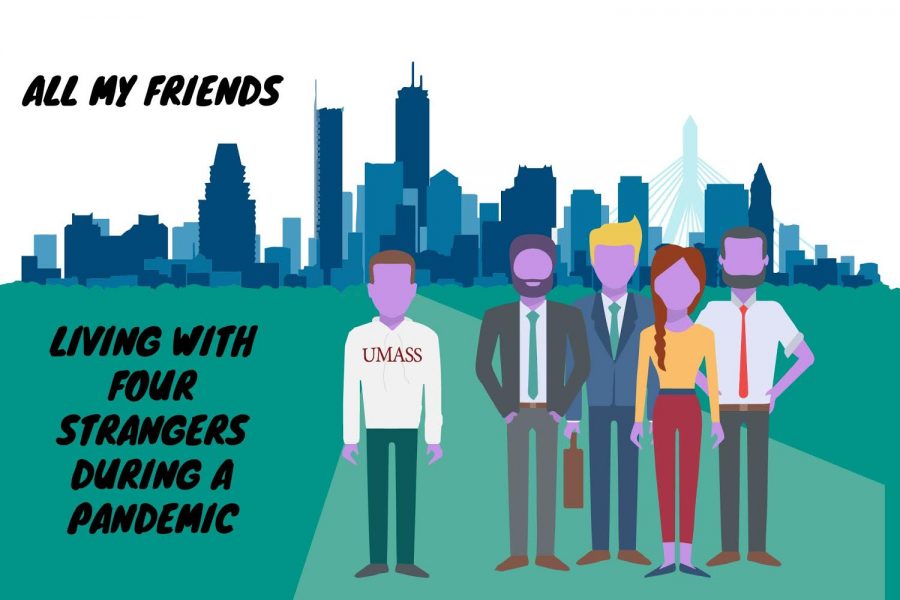 That’s how it starts.

In the weeks leading up to your first days of college, you’re nervous.

Anxieties include — but are in no way limited to — meeting new people, living with a new roommate and discovering what you want to do for the rest of your life. You know, nothing that important. When I made the decision last winter to repeat that process and spend the spring semester in Boston working full-time, those anxieties came rushing back.

Apartments that cost less than a monthly mortgage and don’t come with complementary cockroaches are few and far between in the city. It’s unclear how any college student could afford one without parental assistance, which I was fortunate enough to have, along with a paying job. After several apartment tours that nearly made me reconsider moving to Boston at all, I was ready to settle on a quaint place in Porter Square, just a short T ride away from my downtown office.

Then I saw a listing for an apartment in the North End — at a strangely reasonable and significantly cheaper price. Instead of securing a place before my job started, I opted for a two-hour round-trip commute for a few days. I lost a chunk of money in parking fees, but I couldn’t pass up the opportunity to interview for a chance of living in the most charming neighborhood in the world.

And if it’s crowded, all the better / Because we know we’re gonna be up late.

Walking to the apartment on the narrow cobblestone sidewalks illuminated by dim streetlights, past the lingering aroma of brick-oven pizza and the continuous shouts from elderly Italian men erupting from restaurant windows, I knew instantly that — as David Byrne would later echo through my headphones — this must be the place. But there were still doubts.

The prospective roommates, four recent Tufts graduates, were close friends who likely wanted another twentysomething to be confined with for several months in a tiny apartment. At the time, I was only twenty – no something – and hardly passed as old enough to drive a car. Still, I plopped down on their couch, removed my University of Massachusetts beanie and striped scarf, and presented my case as to why I was the best roommate they could ever want.

Somehow, they told me via Facebook Messenger several days later, my pitch worked. It turned out that the person who they chose first had bailed. So, it kind of worked.

Remember, this was January. There was no pandemic. Everyone was worried about World War III. Tik Tok was just becoming mainstream. Tiger King hadn’t even been released yet. In other words, these were simpler times. If you had told me back then that I would be forced to spend every waking moment with these four strangers, for several months, during a pandemic, maybe I would’ve thought about finding a different place.

My former roommates, who I now count among my closest friends, would kill me if they knew I was calling them strangers at all.

But if you’re worried about the weather / Then you picked the wrong place to stay.

During the first two months of my time in Boston, I rarely ventured out of my bedroom. I missed my friends and wished I was back at school where things were familiar. I didn’t know anyone in the city and didn’t feel confident enough to meet anyone (Save for one Bumble date whose glasses I broke. Sorry about that, Veronica). It was hardly the idyllic experience that you might expect when moving to a city for a dream job.

I don’t remember how it happened exactly – likely brought on by the mutual stress caused by the deadly disease decimating society — but Chris, Katie, Sam and Max turned those days into some of the best I’ve ever had.

Since we couldn’t venture out into the city, and I couldn’t go to bars anyways, the quarantine restrictions forced us together, both figuratively and physically. My cubicle was the couch, Chris worked at a nearby makeshift standing desk, Max in his bedroom, and Sam and Katie back to back in the kitchen. Two things that will never be explained: How we didn’t fight constantly and how our Wi-Fi never failed.

What could I find in common with these people? I’m a college kid, a devout vegetarian and a journalist. They’re several years out of college, keep fish sticks in the freezer and are consultants. I’m from Massachusetts; they’re from California. I had to find a way to make this work.

We slowly discovered that our personalities were more similar than first anticipated. One of my fondest memories in the apartment – waking up on a weekend morning to hear Chris playing Talking Heads – led to a Sunday morning routine of listening to music and reading together in the living room. Pretentious as it may sound, French jazz pairs well with coffee and a book on any weekend morning.

In a stark contrast to our tame mornings, and in typical fashion of being roommates, we bonded over drinking games. I learned that I’m mediocre at beer pong, but oddly good at sinking the last cup. They taught me Flong (the child of flip cup and beer pong) and Pangea (unsure how to describe this one). Sticky floors and reused red solo cups provided a brief escape from the pandemic and the seriousness of the world. For just a couple hours we could forget about everything and just worry about who would clean up the mess in the morning.

I miss ordering pizza from Dominos and watching “High Maintenance” into the early morning. I miss sitting on the rooftop at night and discussing which apartments we’d live in if we had the money. I miss stumbling to the 24-hour pastry shop well past midnight — when everything magically tastes better.

At night during the first months of my stay, I often looked for some way to entertain myself. When puzzles or reading didn’t cut it and we were still recuperating from game night, I would attempt to hone my amateur baking skills with our neglected brown bananas. The product was a tray of surprisingly tasty banana chocolate chip muffins. Everyone loved them.

Though it may seem insignificant, those muffins came to symbolize something greater than improved baking skills. Those muffins were the first thing that I had to offer to my roommates. Sharing them was the first experience we could bond over and the first time I felt like I was more than just another temporary roommate. My presence was appreciated. I was appreciated.

I learned a lot of things in that dingy apartment. I learned how to play a Dutch board game and how to do “leg arms.” I learned how long it takes to complete a 1000-piece puzzle of a tri-colored landscape alone. I learned that you should instinctively hide the ash tray, not the beer can, when the landlord walks into your apartment — freshman year habits die hard.

Above all that, I learned that what really matters in life is the people you spend your time with. It sounds cliché, but sometimes clichés are well-known for a reason.

The difference between continuing my miserable streak into the pandemic and having the most fun of my life was my roommates accepting me. Strangely, the pandemic made a difference — the shared experience of quarantining, socially distancing and working from home brought us closer together. Like other young people around the world, we were confused and scared of the virus. But shouldn’t these be the best years of our lives? Why not try to make the best out of it together?

Throughout this piece, I sprinkled in lyrics from “All My Friends” by LCD Soundsystem. Music provided me with some semblance of normalcy and comfort while I coped with existential crises during the pandemic. I’d like to extend a special thanks to Regina Spektor, The Flaming Lips and Radiohead among countless others.

However, few songs encompass those months in that apartment as well as “All My Friends”.

During my time in that apartment, I couldn’t get my music to stick with any of my roommates. Even so, I figured that Chris, who had proclaimed his love for dance music, would appreciate LCD Soundsystem’s synthesizers, house beats and dance-punk style.

“I don’t know what it is, my other friends love them, too,” Chris told me one day. “I just can’t get into them.”

Then he did. And it made sense.

And to tell the truth / Oh, this could be the last time.

The end of my time in the North End loomed on the horizon. I learned from sitcoms – I’m looking at you, “New Girl” and “How I Met Your Mother” – that friend groups who live in city apartments together inevitably split up. It’s the natural order of events, and I happened to be the final roommate before the lease ended. I was watching the sunset.

We connected to “All My Friends” because of the sentiment James Murphy laced into the song. Although Murphy was in his mid-30s at the time of writing it, the song beckons back to the years when then-Mayor Rudy Giuliani enforced a law prohibiting dancing in many clubs throughout New York City. An awkward outcast for much of his musical life, Murphy was finally coming into his own as a DJ, making crowds dance into the early hours of the morning. It was the best years of his life.

Seemingly out of nowhere, the era came to an end. Where are your friends tonight?  Murphy repeats as the song comes to an end. As if he’s conceding, Murphy pleads one last time: If I could see all my friends tonight.

On my final night at the apartment, my roommates and I climbed onto the rooftop adjacent to our building and sat facing the city lights. We didn’t talk much about what our futures held. We had already done plenty of that in the past few months.

Instead, we sat there and listened to “All My Friends” one last time.

During the first month of the pandemic, I kept a journal detailing daily activities and emotions. One excerpt about my roommates, written on March 13, rings as true today as it did then:

“I’m glad they’re the strangers I’m living with during a pandemic. It could’ve been much worse.”