Four former Minutemen suited up for their teams’ NFL openers 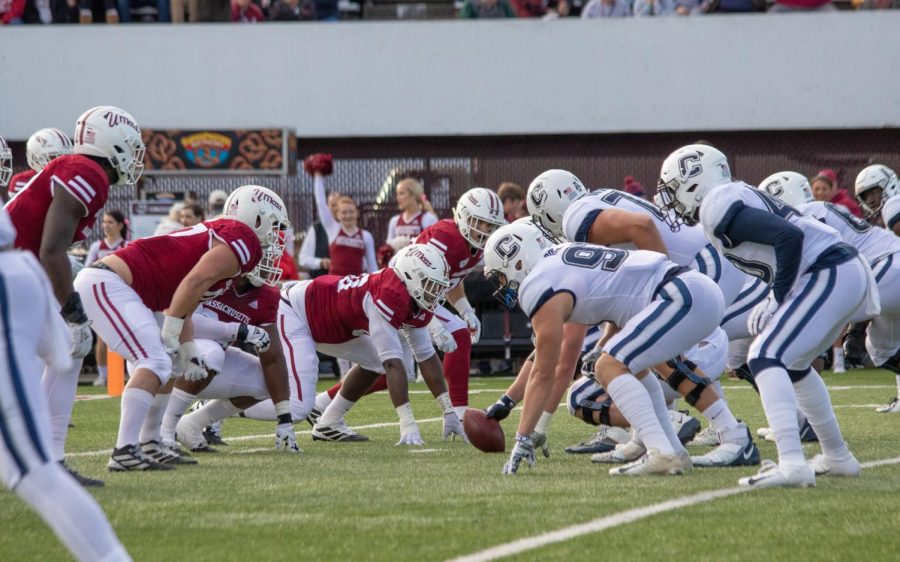 With the first Sunday of the NFL season behind us, it’s time to check in on a few of the University of Massachusetts football team’s alumni and how they performed in Week 1.

UMass is currently represented by four players in the NFL: Tajae Sharpe, Andy Isabella, Isaiah Rodgers and Elijah Wilkinson. And as we know from their time with the Minutemen, all three can make the big play for their teams.

We’ll return from time-to-time to see how the quartet of Minutemen alums perform in 2020.

Sharpe is the oldest UMass alumni in the NFL, beginning his fourth season this year. He also finds himself with a new team, after being brought in by Minnesota this offseason. Sharpe had previously played three seasons for the Tennessee Titans.

To this point in his career Sharpe hasn’t been able to find a consistent spot on the field, and it looks like that will continue early on this season, as he did not see much time against the Green Bay Packers on Sunday. He was unable to haul in his lone target in that outing.

Still, there is plenty of room for Sharpe to grow into a larger role on the Vikings. Stefon Diggs’ departure this offseason opened a spot in the receiving core, and even though Minnesota drafted Justin Jefferson in the first round of this year’s draft, Sharpe can still find a spot behind him and Adam Thielen.

Like Sharpe, Isabella will have a tough time earning reps for the Cardinals and their stacked group of wide outs. The addition of DeAndre Hopkins this offseason means Isabella will have to battle Larry Fitzgerald, Christian Kirk and Hopkins for playing time.

As such, Isabella was not able to find a target in Sunday’s 24-20 upset over the San Francisco 49ers. DeAndre Hopkins caught 14 passes for 151 yards, leaving little opportunities for anybody else, Isabella included.

Christian Kirk was used as the Cardinals’ third wide receiver, but only caught one pass for zero yards despite being targeted five times. That might be reason for Arizona to consider splitting his time with Isabella’s in the coming weeks.

Not to mention Isabella is still one of the Cardinals’ most explosive players, and he showed that last year when he caught an 88-yard TD pass from Kyler Murray. That play was Arizona’s longest touchdown of 2019.

If he can continue to bring that speed and explosiveness to the Cardinals, Isabella will be valuable as a role player, even if he doesn’t get consistent playing time in Arizona’s offense.

The newest NFL product to come out of UMass, Rodgers made his NFL debut on Sunday for the Colts, albeit an uneventful one.

Rodgers didn’t see a lot of time in Indianapolis’ 27-20 loss to the Jacksonville Jaguars. The Colts secondary put up a disappointing showing altogether, allowing Gardner Minshew to complete 95 percent of his passes in the game.

That is a bad thing for Indianapolis, but maybe not for Rodgers, who might see more playing time if head coach Frank Reich decides to shake up that group in the future.

As of now however, Rodgers is not being featured very much in the defense. In fact, he has been featured more heavily on ESPN’s website for his bowling skills than his play on the field, after he bowled six strikes in a row between his legs earlier this year.

It is not surprising that the Colts’ sixth round pick did not make an immediate impact on Sunday. But hopefully Sharpe, Isabella and Rodgers can all grow into larger roles for their respective teams as the NFL season rolls on.

Wilkinson suited up for the Broncos on Monday Night Football. The former Minuteman got the start at left tackle, tasked with protecting Drew Lock’s blindside.

After catching on as an undrafted free agent, the 329-pound Wilkerson has been a staple of the Broncos’ offensive line in recent years and looks to do much of the same in 2020. A season ago, the UMass alum started 12 of Denver’s 16 games, appearing in 15 of them. Since his debut in 2017, Wilkinson has played in 37 games, bouncing between the active roster and the practice squad in his early years.

After seeing time at guard in seasons past, Wilkinson slots in at the all-important left tackle spot in 2020.