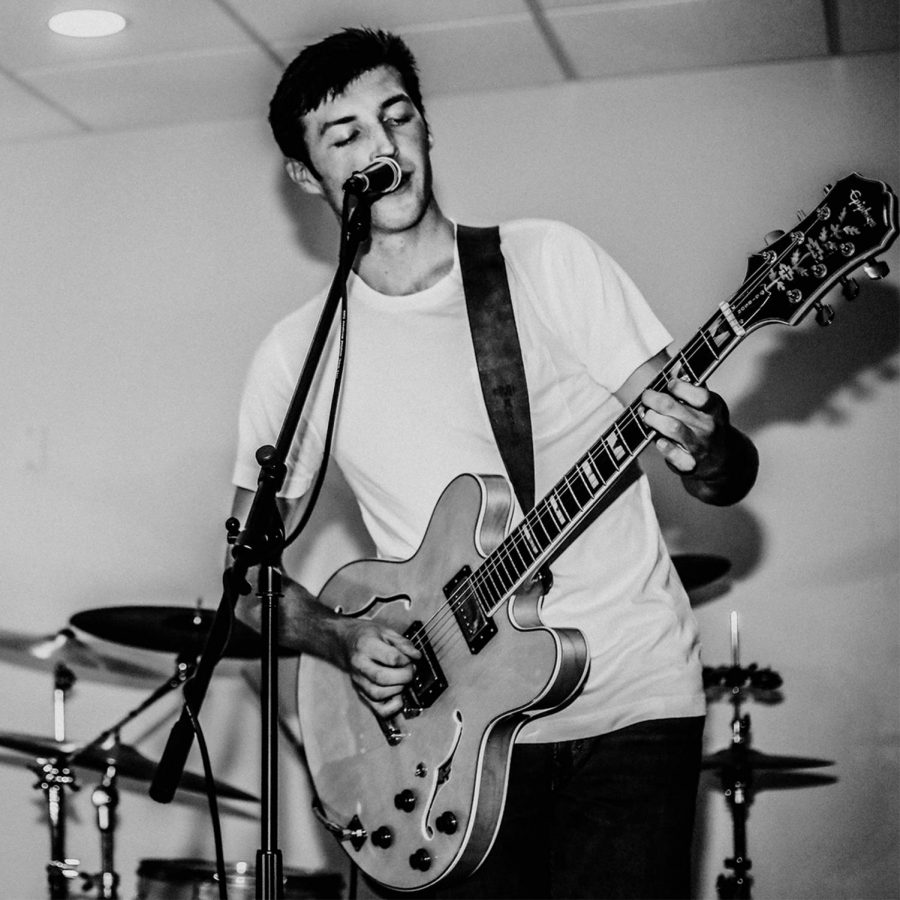 I was shuffling through my Discover Weekly playlist on Spotify a few months back, out of boredom more than anything, when I paused at one song. The cover photo was simple, just a black and white image of a group of teens, but there was something inherently whimsical about it — it was genuine. It was an advertisement for adolescence. And that is exactly how I can describe the music that followed; “Fall for Her (Nobody Else),” as well as the rest of Runner and Bobby’s discography, existed in my teenage subconscious before I had even pressed play.

Runner and Bobby was born as a duo, but is now run independently by Parker Bailey. A 19-year-old at Ohio’s Denison University, Parker has already established an extensive musical background. Growing up in the Chicago suburbs, he began playing guitar when he was just 8 years old, and in his sophomore year of high school, he developed his first band, TheSpins.

“I wrote the first TheSpins EP, and I kind of just presented it to my friends and was like, ‘Can you help me record this?’ and then they ended up becoming band members. And that was a fun time, you’re in high school and you feel like everyone knows your band, and it’s fun like that,” Bailey said. “We played some garage shows and basement shows that were just crazy. I’m super fortunate to have that experience.

“That kind of ended in senior year. It’s just me now and I continue to manage and look over it,” Bailey said. “There’s stuff I’m proud of there, but I just have to figure out what to do with it. It was a fun time and I look back fondly on it.”

When asked if he writes all his own music, he clarified that, “TheSpins was essentially all my stuff, with the exception of one song. Runner and Bobby was more collaborative. But I’ve written and continue to write all my own lyrics.”

Considering the ample number of songs released with both Runner and Bobby and TheSpins, plus the poetic quality of their lyrics, I wondered how Bailey was able to continue to curate innovative content. When I asked about his process, I found that along with personal experiences, one of Bailey’s main sources of inspiration is film. One of his songs off TheSpins EP, “One Good Turn Deserves Another,” was based off a silent film he watched, and producing the song was his version of scoring the film. He also mentioned that he found animated film a source of inspiration. Parker noted that, although he doesn’t know how to animate, it’s something he’s interested in and hopes to work with someday.

When asked of his musical inspirations, Bailey spoke very highly of Julian Casablancas, his favorite artist, and The Strokes in general, which he said was his dream band to open for. “Other than that, I would say Matt Schultz from Cage The Elephant, super cool dude. I love that he works in so many mediums, whether it be fashion, or music. I don’t know if I could necessarily dress like him, but I appreciate that kind of stuff.”

Runner and Bobby’s most popular song, “Fall for Her (Nobody Else)”, is a wistful love anthem straight out of a John Hughes movie. When asked how this ode to infatuation was born, Bailey had this to say: “So that was a collaborative effort. My [former] partner came forward with the music and some lyrics, and I kind of did the other half of it with most of the lyrics and some of the music. That one has a very coming of age, like 80’s [The] Cure vibe, so you have to lean into that a little bit,” he said. “It’s just like if you’ve had a relationship with someone and you just look at them a certain way, and how you kind of think about them. The second verse in particular I wanted to be very blissful, so it has that very drawn out guitar… I guess leaning into that 80s vibe but also taking my own experiences and stuff like that.

“There wasn’t anything for the chorus yet, and I kind of was just thinking of it on the spot the first time he showed me it… But that one was one of those times where it comes really naturally, so it was very satisfying as a musician,” Bailey said.”

Runner and Bobby’s first album, “Suburban Siesta,” was another product of adolescent unrest:

“At the time, it was like — I don’t know if you get this feeling — but it was like, coming from high school in the summer I just felt very, kind of in a nebulous area, where everyone’s just telling you, ‘Oh, you’re going to have a great time in college, and there’s a very promising future,’ or whatever. Just a weird kind of limbo before you’re sent off, and so I think that kind of inspired it I’d say.”

Along with his auditory gift, Bailey also has a knack for visuals. He expressed his love for the component of film in relation to music and spoke excitedly on his release of corresponding shorts to his songs. According to Bailey, this connection between visual and auditory art will be a recurring theme in the future of Runner and Bobby.

I had always enjoyed Runner and Bobby’s album art, many of which feature dreamy, film camera-quality photos. Bailey says that the album art is made by him, too.

“That’s actually one of my favorite parts,” Bailey said. “I really enjoy old film cameras… I use my mom’s Canon from the 90s and shot a ton with that, like taking pictures of my friends and stuff. ‘Suburban Siesta’ is shot on that, ‘Eras’ … basically every album art is that. The ‘Suburban Siesta’ one is actually very cool, because that one was actually a dud photo — I took it through my window and it got a really cool glare.”

After hearing his personal attachments to the album art, I felt compelled to ask about the picture that made me fall in love with his music in the first place.

“The cover [of ‘Fall for Her (Nobody Else)’] is a polaroid picture. We did a basement show at my friend’s house, and a ton of people showed up actually. We passed out disposable cameras to people, and one of them was a mini polaroid. It was really cool to see what people did with it. Someone took that photo, so I used it for that. I know everyone in that picture, and a lot of them are my friends.”

It was at this point that I understood that there was nothing inauthentic about Runner and Bobby. Throughout my conversation with Parker, he mentioned, on multiple occasions, that producing Runner and Bobby isn’t work for him at all — he just can’t imagine not doing it. It’s a similar mindset to creatives everywhere, bearing a striking similarity to another musical prodigy, Keith Richards of The Rolling Stones, who said in a recent interview, “I really can’t imagine doing anything else.” Whether or not he intended it to be so, Bailey made a statement that made me understand why his music is so good; It’s his way of life.

With so many accomplishments already under his belt, and music coming out rapid-fire over the past two years, I wondered what was next for Bailey as both a musician and an individual. Regarding new stuff, he acknowledged that he’s had steady music releases since the birth of Runner and Bobby. Since he’s solo now, Bailey is planning on taking a little time to himself and slowing it down a bit for his future releases. However, he said he’s always working on something, whether it be managerial endeavors, music or other forms of creative expression.

Bailey spoke about his current status as a one-man band, so I inquired if that was something he viewed as permanent.

“I think that I’d like to perform with a band, I really like collaborating with people,” said Bailey. “I think for now it’ll probably be a little more solo, but I’m not opposed to collaboration. I really get a lot out of that.”

With his music gaining streams daily, and his experience performing live, the prospect of touring again came up in conversation.

“Yeah, U.S. world tour,” he joked. “Nah, I’m kidding. I’d definitely like to though. I need to figure out how to perform it live, because I need musicians and stuff like that, but that’s definitely on my radar… But yeah, I’d definitely consider it. I’d love to. That’s my dream.”

Near the end of my conversation with him, I asked Bailey if he had anything he wanted to say about himself, in which he replied, “I think the big thing that gives me a lot of energy is when people are super passionate about things. Like about anything, I don’t care what it is, if you’re inspired by, like, grass,” he said, laughing. “I get a lot of energy and like to surround myself with people like that.”

By the time we said goodbye, I was acutely aware that I had just spoken to someone very significant. His passion, humility and genuine love for his craft was refreshing. The best part about Bailey is that he’s just experimenting; he’s young and doing what he loves. He’s acting on his own ideas, for his own enjoyment and letting the world witness it. I have no doubt in my mind that Bailey’s future endeavors will be impressive, and Runner and Bobby will become a recognizable name amongst the indie/alternative genre.