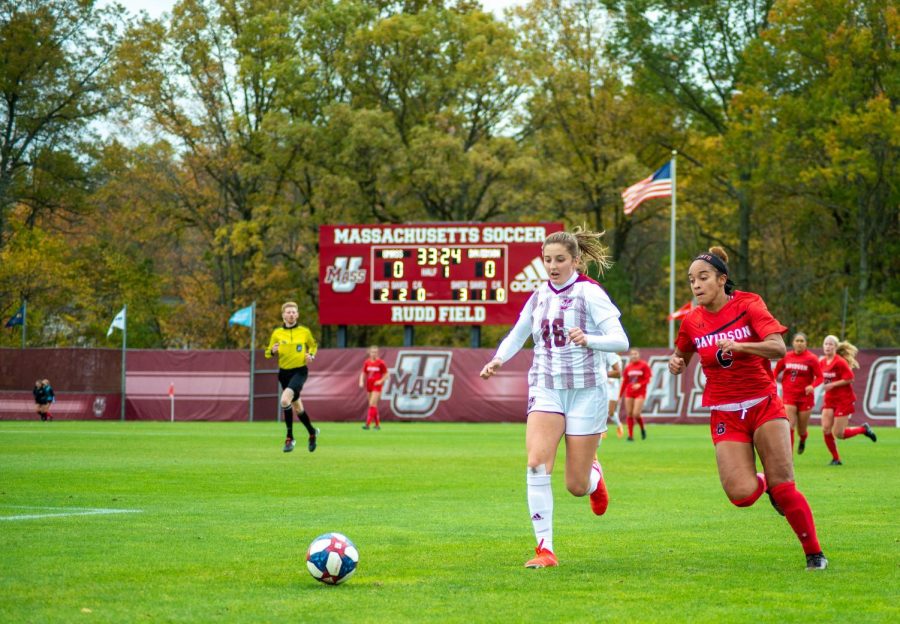 With soccer leagues closing around the country at all levels, finding new players to recruit for many colleges and universities has become a struggle. With no practices to watch or games to attend, coaches have to rely on players they’ve seen in the past to continue to progress in times of change. However, head coach of the University of Massachusetts’ women’s soccer team Jason Dowiak has found his program to be in a better position than others.

“One of the things that we feel like we’re in a better situation with than other schools is that we were very advanced in our 2020 class,” Dowiak said. “Right as COVID was starting to kick off we had about seven or eight kids that had already committed during the winter months which is the normal time that you’d just start making offers. We got lucky that the kids we wanted had committed to us early.”

At the forefront of recruiting is building relationships with players and their families. Because of this, one of the keys in landing a high-level recruit is to create a welcoming environment before the player arrives on campus for the Minutewomen. By developing that environment, players can feel more at home from the start and jump into training as soon as they arrive without facing any hiccups. This ultimately led freshman Emily McCormack to make her decision to join the program.

“The most important thing for me was on my unofficial visit because he [Dowiak] went out of his way to show I belonged there,” McCormack said. “My two parents came with me and we all sat down and had lunch together which I’d never experienced with a coach before, and then he showed us around campus since I had never taken a tour up until that point. He did the tour himself and it ended up being a seven-hour day where he went really out of his way which made me feel like I belonged on the campus and that I’d feel that support coming in as a freshman.”

With the fall season being postponed to the spring — and potentially the whole year — recruits have to make a choice whether a program such as UMass is worth committing to if their freshman seasons were to be completely canceled. However, the Minutewomen have a lot of potential to be very successful in the Atlantic 10 and Dowiak hopes that the team’s promise along with its values will entice players to still join the program.

“The last two years we’ve done well since I took over but there’s still uncertainty from the best players in the area about UMass being a valid option for them to progress as a player,” Dowiak said. “But I feel like the conversations we’re having with them when they’re on campus or on Zoom calls now that they see the passion we have in developing players from a holistic standpoint and that we’re very accessible.”

Before coming to UMass, Dowiak was an associate head coach and recruiting coordinator at University of Southern Florida, where he worked with youth programs in the area such as the Tampa Bay United. Sam Mitchell, the UMass’ assistant coach, also coached the Orlando City’s youth program before his arrival to Massachusetts. Now on the same coaching staff for the Minutewomen, they continue to use their connections in the south to find star players to recruit to the UMass program.

“We all like to do club coaching as well because it allows us the opportunity to be on the field and build relationships,” Dowiak said. “It inevitably allows us to build relationships with players that get our coaching style up to four years before going to college and then they know us and that comfort level is there.”

This past year, the Minutewomen landed four recruits from Florida, two joining the program this year as freshman and two the following year. All four, at one time or another, played under Dowiak or Mitchell on a youth program when they were younger. One of those recruits is Orlando native Karina Groff who has been a UMass prospect since 2017.

“[Dowiak] first heard of me from Sam [Mitchell] because Sam was my coach at my hometown club at Orlando City when I was 14,” Groff said. “When Sam went up there, he got Jason connected with the coaches from my club. They both came down for a weekend to go to a practice and look at our team when I was a sophomore and were looking to recruit older girls but also looking at us a little bit. Then he went to our games that weekend and he texted my coach after saying he was interested in me.”

Known for being a tremendous athlete and a highly thought-of recruit, Groff still had to possess more than just skill to fit into the Minutemen’s scheme. Under Dowiak, the Minutewomen and the coaching staff holds players to professional standards where morals and core values are considered just as important as the talent players have on the field.

“It’s really easy to find good players and I feel we’ve done a very good job to convince a lot of good players to come here,” Dowiak said. “But finding kids that are good and care about our core values like service and concern for your teammates and the people that work for you. In college athletics you have a lot of support staff so knowing that we’re bringing in kids that have that ingrained in them from the way that they were raised is really important and I think we’ll get more out of players that have that mentality.”

As much success as UMass has had landing players from Florida, the Minutewomen look to make a shift to focusing more on the northeast in their search for players. To build a community-like environment with players and their families, the University must be accessible to everyone. Dowiak has found that with players from other parts of the country, there is a struggle to build those personal relationships with family members.

“I think we’re going to continue to recruit from Florida because we have such good relationships with the clubs down there,” Dowiak said. “I think we’ve done well my first two years, but I hope to get our recruiting territory much more northeastern. There’s more than enough clubs up here and we want that family community as well, so recruiting from Florida — it’s harder for families from Florida to get up here. But if 80 percent of our team is from the northeast, then those families can get up here on the weekends and we can build a better community.”

The Minutewomen coaching staff have also shifted their club coaching efforts to the local club New England FC. NEFC has different satellite clubs across Massachusetts but the main focus for UMass will be the NEFC West club, located the closest to the University. Assistant coach Morgan Ferrara will be coaching the 2002s and 2010s, Mitchell will coach the 2004s and 2006s and Dowiak will bounce around clubs and act as a floating trainer and work with as many groups as possible. This allows the Minutewomen to create a pipeline for young players to develop in UMass’ playstyle.

To not miss out on any unseen talent, the Minutewomen look to build connections with other coaching staffs of youth clubs to get a better idea of the style of soccer UMass is looking for. In building these connections, other coaches push Dowiak to their own team or in other directions to clubs with players more suitable to fit under the Minutewomen’s system.

With this extensive recruiting method and depth in players, the Minutewomen show a lot of promise in future seasons. After a loss in the quarterfinals of the A-10 tournament last season, this much promise suggests that they’re prepared to make a run at the championship next season.

Kevin Schuster is an Assistant Sports Editor and can be reached at [email protected] Follow him on Twitter @KevinESchuster.