The confusion in the film is the means and the end, but it might not be for everyone 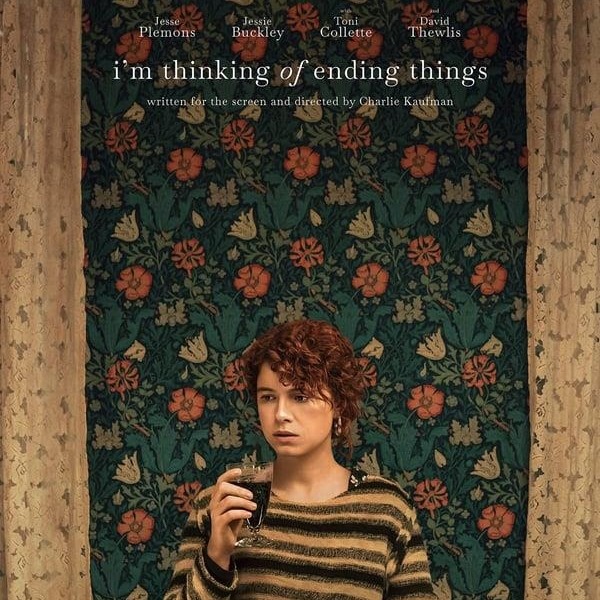 You may not know who Charlie Kaufman is. If you do, you probably have strong feelings about him, or at least a lot of thoughts.

He is best known for writing the screenplays for “Being John Malkovich” and “Adaptation” both directed by Spike Jonze and “Eternal Sunshine of the Spotless Mind”, which was directed by Michel Gondry and is arguably Kaufman’s  most widely known film. In recent years, Kaufman has begun directing his written works, with “Synecdoche, New York”, “Anomalisa”, and now, of course, “I’m Thinking of Ending Things”.

The premise of “I’m Thinking of Ending Things” is that a young woman (Jessie Buckley) is going to meet her boyfriend’s parents. She seems to be having doubts about the future of their relationship. Her boyfriend is played by character actor Jesse Plemons, who you may know from the movies “Vice” and “Game Night”. The cast is rounded out with Toni Collette and David Thewlis as his parents.

In general, Charlie Kaufman’s films are characterized by either an odd premise, a steep decline in lucidity, or both. “Being John Malkovich” starts off being about a man who finds a way into actor John Malkovich’s brain, and the film’s plot only gets more bizarre from there.  “Synecdoche, New York” was divisive when it first came out, with Roger Ebert praising it in his initial review and later claiming it as the best movie of the decade. Others heavily criticized the film, which flopped at the box office.  It’s still hard for critics and audiences to find common ground on the film, though with the release of the acclaimed “Anomalisa” and a broader examination of Kaufman’s work, it has aged better.

I bring “Synecdoche” up because “I’m Thinking of Ending Things” shares many similarities with it (fun fact: synecdoche is a literary term that refers to using a part of something to represent the whole, so I just used synecdoche in referring to the film as just “Synecdoche”). Don’t worry, I won’t spoil Roger Ebert’s favorite movie for you. In the simplest terms, “Synecdoche” is about a theater director who tries to create a play about his life. It starts out fairly normal, but once it starts to get weird it spins out pretty quickly. Every time you think it can’t get more confusing, frustrating, and unnerving, you’re proven wrong. It is also intentionally very emotionally impactful; by the end of the film, you  might feel bogged down, angry, or like you’ve had a cathartic release.

“I’m Thinking of Ending Things” is similarly confounding. Its surrealism compounds itself. There won’t be a moment that lifts the confusion until the film ends and you look everything up — this was the case for me, at least, and I know this has been a somewhat common experience for other viewers. “I’m Thinking of Ending Things” is arguably more plot-based than “Synecdoche,” with a more concrete ending, but it still can leave a viewer unsatisfied or lost if they are expecting a clean and easy resolution, as it doesn’t explain itself at all.  “I’m Thinking of Ending Things”, like “Synecdoche” and Kaufman’s other works, is also very existential. This film examines the past, the present and the future; it examines failures and successes, and what could have been and it does this in an often-overwhelming way. It can be an overload of information and emotions being thrown at you in a way that is intentionally chaotic.

The trailer for “I’m Thinking of Ending Things” looks like it could be for a horror film. To those unfamiliar with Charlie Kaufman’s work or what the film is about, this is a reasonable conclusion to draw. The trailer uses the confusion and uncertainty  of the film to present it as scary, when in reality the confusion in the film is the means and the end.  Of course, this doesn’t mean the film is easy to deal with psychologically. There aren’t jump scares or intense gore, but the film is insidious. You’ll be confused, and that may be your primary emotion, but you will go through a lot more, too. It sneaks up on you. If you’re looking for something with clear emotional peaks and valleys, keep looking.

To me, “I’m Thinking of Ending Things” is a film that gets better with time and effort. Maybe some people can watch this once, think about it for five minutes, and enjoy it, but that’s not me. I had to read up on the book it was adapted from, Iain Reid’s 2016 debut novel of the same name. This didn’t answer close to all my questions, either, because just like in “Adaptation”, Kaufman spins off on his own from the original work. I then had to read up on what the man himself has said about the film, which isn’t much. Kaufman has said on a few occasions that he doesn’t like to movies. After reading some more analysis, and thinking about it a good deal, only now do I feel that I have a grasp on what the film is about. I only feel like I have a grasp on what the film is really about now that I’ve done a lot more reading and thinking. I’m not always the quickest to pick up on the meanings of complicated films, but I’m also someone who has to analyze films every day for my classes, so you can decide for yourself whether or not I’m a good indicator of how hard a movie is to understand.

When I put the pieces together to what I believe is a solid reading of the film, I like it. When it ended initially, I was confused and annoyed, even though I already knew based on Kaufman’s other movies that I would be left feeling lost while the credits rolled. But now the film has a clear message to me, one that I can dissect and think about on its own.

I’m sure if I rewatch it, though I am not sure I will, as it is a lot to put myself through again. I will get the chance to appreciate the smaller details and hints in the film and elements like its cinematography or editing. For now, all I have is the meaning I dug up to get through the complex Kaufman labyrinth that is now available to stream on Netflix.