Residents ask for suspension or expulsion for students 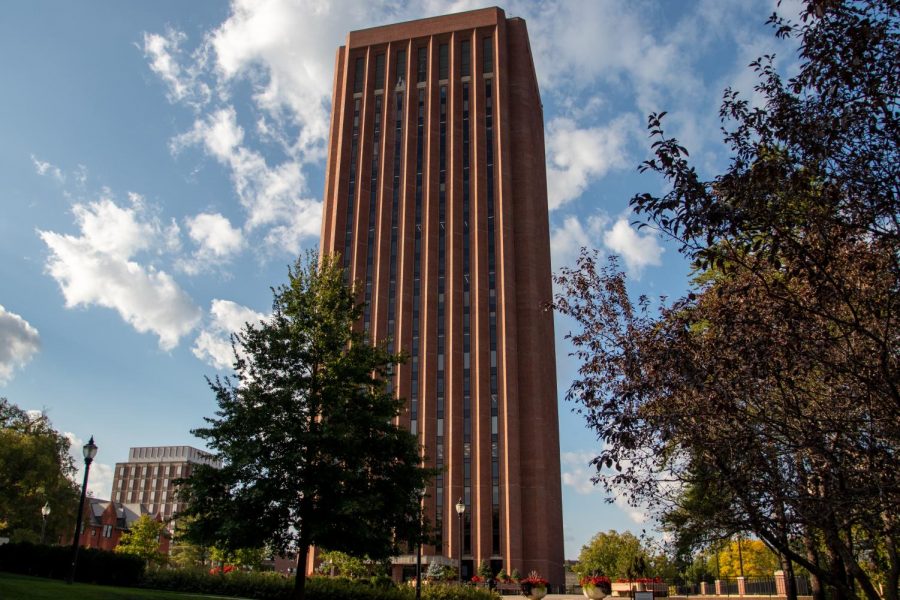 Since the beginning of the school year, the University of Massachusetts has been one of few major schools in the state to refrain from punishing students who break coronavirus safety guidelines.

After a sudden spike in cases, Amherst residents want that to change.

The Amherst-Pelham Regional School Committee voted to send a letter to Chancellor Kumble Subbaswamy at a virtual meeting Tuesday night, urging the University to revise its Community Agreement. The town was a designated “red zone” following a reported 75 positive coronavirus cases in one week — all from UMass students living off campus.

In the letter, the school committee asked school officials to “clearly communicate and consistently apply disciplinary consequences for violations of the Community Agreement, including suspension or expulsion depending on the circumstances and egregiousness of the actions.”

As a result of the uptick in cases, many of which stemmed from one off-campus party, Amherst Public Schools were forced to delay in-person learning, originally slated to begin Oct. 1. Preschoolers, kindergarteners and first-graders — the first groups intended to return to school in person — now have to wait an additional two weeks until Oct. 15.

Greg Sengle, a town resident, was ready for his two first-grade children to attend their first day of school.

“The very night before they are to go back, nap sacks packed and excited, we learn that due to an outbreak, we will not be allowed to go back,” Sengle said. “Our impression is that the UMass administration is doing little, if anything, to enforce social distancing and masking guidelines for students this semester if they are off campus.”

Lilian Kravitz, a town resident in her 70s, also sent a letter to the chancellor. She expressed concern for her own health and for the education of her grandson and other children who may rely on the public schools reopening, such as those with special needs or without housing.

“Please hear their cry of frustration as your students party,” Kravitz wrote. “I would like the consequences to be their loss of tuition and dismissal from the University.”

Instead of punishing students, the University has taken a more lenient approach to those who contract the virus. Cooperation with students, school officials said, will improve contact tracing and reduce the potential spread of coronavirus in the area.

However, disciplinary action isn’t off the table.

“Leading with punishment doesn’t solve anything or get us anywhere,” said Brandi Hephner LaBanc, vice chancellor for student affairs and campus life, in a virtual town hall in early September. “But we absolutely have tools to take action.”

“Emphasizing a confrontational approach can be counter-productive and discourage participation in contact tracing efforts,” said Ed Blaguszewski, a University spokesman, in a statement. “However, if students are involved in egregious or repeated acts in violation of the UMass Amherst Community Agreement, such matters are forwarded to the Dean of Students for review and potential sanction under the Code of Student Conduct.”

The school committee said a policy similar to Northeastern University’s would be satisfactory. If implemented, students who attend or host gatherings without masks or social distancing “can expect” suspension, and student organizations who host such gatherings “can expect” to have University recognition drawn.

It’s essential for the students to understand the impact the adverse impact their actions caused, town residents said. University students associated with the spike directly affected the reopening of the seven local public schools, affecting hundreds of students’ education.

Jasmine Kerrissey, an associate sociology professor at UMass, was looking forward to her son attending kindergarten in person. Her partner works in healthcare, and the pandemic has made it difficult to take care of both her kindergartener and 3-year-old child while working.

“It’s made childcare very complicated,” she said. But “the school system has benchmarks, which I fully support, and of course I only want kids to be in school if it is safe for them, teachers and the broader community.”

As part of an agreement with the Amherst-Pelham Education Association, the schools must automatically close to in-person learning for two weeks if there are 28 or more new cases per week per 100,000 people — using a seven-day rolling average — in Hampshire, Franklin and Hampden counties. Each county is weighted, with 0.8 for Hampshire, 0.1 for Franklin and 0.1 for Hampden.

In an email to the campus community, University officials said a student organization was not the cause of the first cluster. Forty people attended the party which caused the initial cluster, Subbaswamy said at a virtual alumni event.

“We have heard various reports about the number of students at the party, so we’re not in a position to confirm a particular number,” Blaguszewski said in a statement Wednesday.

As a former college student and member of Greek life, Sengle said he understands the students’ behavior. However, when it affects children’s learning, students must understand the implications of their actions.

“Perhaps some will take a bit more care understanding some more of the consequences of being cavalier in the age of COVID,” Sengle said.

Though the school committee expressed gratitude to the “vast majority” of UMass students following safety protocols, “recent events demonstrate that even a small number of individual actions can have serious consequences for the larger community,” the letter said.

Cases at the University more than tripled in one week, beginning Sept. 22. The weekly positivity rate, which had reliably hovered around 0.01 percent for two months, rose to 2.87 percent at its peak in the days following.

“We appreciate the University’s sincere efforts to educate and encourage students to follow mask, distancing, and social gathering guidelines,” the school committee wrote. “We now ask you to consider that education and encouragement alone is not sufficient to ensure the level of compliance needed to prevent COVID-19 from further impacting our schools and our community.”

Currently, the University does not specify what town the people who tested positive live in or how many active cases there are among the UMass community. The Town of Amherst currently has 76 active cases, including students who live in town.