"I feel like the community has stepped in and shown up" 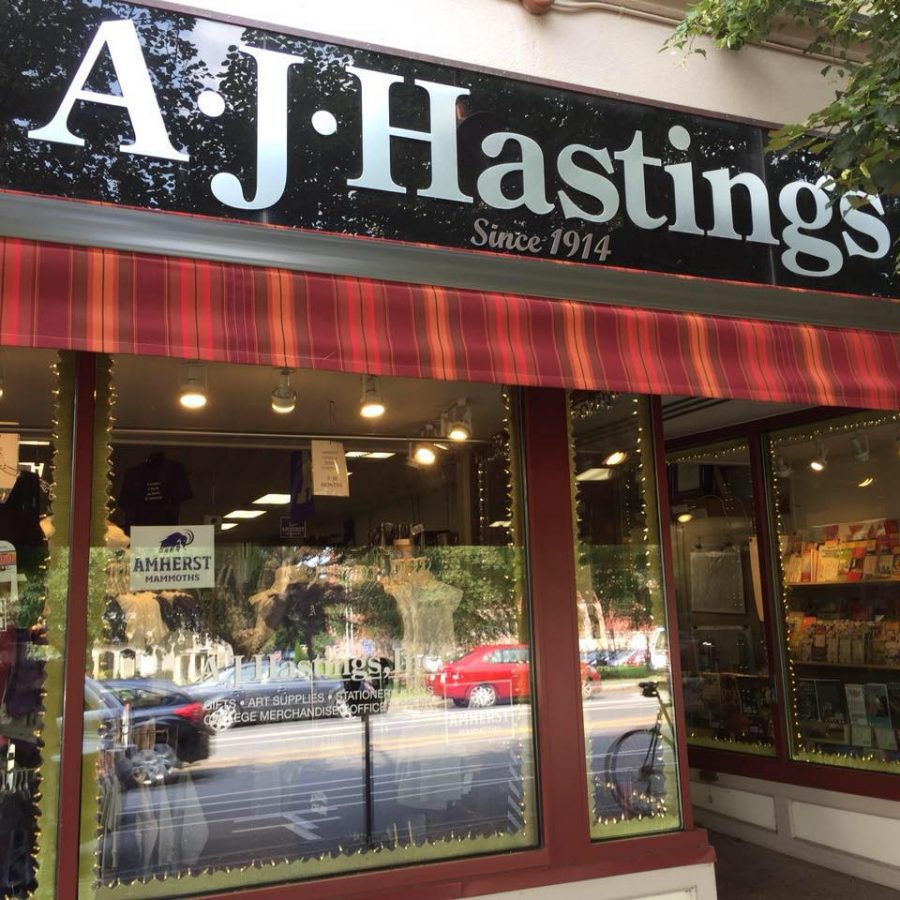 Downtown Amherst has changed since last spring. People wander around in masks of all kinds: blue surgical masks, N95 masks, cloth masks in different colors and patterns, tightly wrapped bandanas. A.J. Hastings, renovated in August, has colorful, hand-drawn signs in its windows. One reads, “WE’RE OPEN! 10 AM TO 4 PM,” inviting the public to come inside and check out the new layout.

A.J. Hastings opened in 1914, when Asa Joseph Hastings bought the business from another local family. It’s been through the Spanish Flu, both World Wars, and the Great Depression. It’s a staple of downtown Amherst – a cozy shop filled with books, toys, greeting cards, stationery and college merch.

According to co-owner Sharon Povinelli, 53, the store has opened every day since 1914. Through every Christmas and every New Years, days when super-stores like Target and Walmart are unavailable to last-minute shoppers, A.J. Hastings has been there to offer the morning paper or sentimental cards. This was true until March 20, when the storefront closed due to COVID-19 related risks.

Povinelli described the weeks prior as difficult. “As things were progressing,” she shared, “the customers we were getting were most vulnerable.” She was concerned about elderly patrons, some of whom have been coming to Hastings for generations. However, Povinelli didn’t expect the shop to stay closed the 21 weeks that it was.

Through the summer, A.J. Hastings continued to accept web and phone orders, most of which were for newspapers and college merchandise. During this time, sales dropped 80 percent.

Povinelli thought back to one customer in particular, an elderly woman, who had frequented the shop for decades.

“We continued to put a newspaper on our loading dock for her after we closed,” Povinelli said, “She wanted to be able to come and we did that for her.” The co-owner said that this experience broadened her view of COVID-19 and its effect on the community, “I have become really aware that it’s a really isolating disease.”

Sharon Povinelli started at A.J. Hastings in 1988. She worked alongside Mary Louise Broll, 62, who was married to the store’s then-owner, David Hastings. In 1996, David was hit while riding his bicycle and died the following year due to his injuries. In the years that followed, with Broll as owner of A.J. Hastings, Povinelli stuck around. A couple years later, Broll and Povinelli started a relationship, and in 2009 they got married.

Since then, Povinelli and Broll have owned the shop together. Both are warm and fit women, their hair greying and smiles often shining, who enjoy nature and the arts. Povinelli reflected fondly on the years the couple spent running the store while raising their sons, Ben Hastings, 29, and Sam Hastings, 33. It’s a mom-and-mom shop.

When A.J. Hastings closed, its six full-time employees were furloughed. Most, like Povinelli and Broll, have worked there for over 30 years. The shop’s 10 part-time employees, all high-school students, whose faces can usually be found smiling on the store’s Facebook page, were let go. Povinelli said, “that was hard, but I had to do that.”

In August, A.J. Hastings received a Paycheck Protection Program (PPP) loan from the federal government, which allowed them to bring back their full-time employees. One of Povinelli’s main priorities was continuing to provide health insurance to her full-time staff and getting the PPP loan was crucial to that.

Renovating A.J. Hastings was about more than giving the shop a new look or finding something to do. To ensure customers and staff could socially distance, the cozy shop needed to be a bit less cozy. Shields were put up at the register, employees were trained on proper sanitization techniques, and product sections were expanded. The 106-year-old business’ procedures had to change.

Povinelli said that before the storefront reopened, she was concerned about running into anti-maskers, but she hasn’t had a bad experience yet. “People have forgotten to pull them up,” she said, “Had to step out to grab them.” But she chalks it up to human nature.

Nearing 65 days since reopening, A.J. Hastings’ sales are at roughly 50 percent of what they were pre-COVID. “I feel like the community has stepped up and shown up,” Povinelli said. “I would hope people are going to continue that.”

Gabrielle Gould is the executive director of the Amherst Business Improvement District (BID), a nation-wide organization. In Amherst, pre-COVID, their work was geared toward the beautification and marketing of businesses in downtown. “We work for the businesses. We answer to the landlords,” said Gould. “With COVID, we’ve pivoted hugely to become a small business aide.”

As a lover of arts and music, Gould found artists to paint the barriers surrounding the temporary outdoor seating for restaurants downtown. Now, she’s working to procure outdoor heaters for those restaurants, as well as the gear necessary to provide safe indoor dining. The BID has also worked to connect lawyers, investment firms, and CPAs with local business owners, to get them the information and aid they need to survive.

The greatest success of the BID’s pivot, however, was a more direct form of aid. Working with the Amherst Chamber of Commerce, Gould helped create the Downtown Amherst Foundation or DAF, which has raised $320,000 to support local businesses. Gould said it provided “63 businesses with grants up to $10,000, and PPE [or Personal Protective Equipment] to an additional 50.”

A.J. Hastings did not receive a grant from the DAF, but Povinelli said that the BID has been indispensable. “Gabrielle was in constant contact with state reps and businesses, getting us timely and meaningful data,” Povinelli said. “Working with the town to get state-funds for outdoor dining, which gets people into town and helps all businesses.”

But it’s not over. Both Gould and Povinelli agree that what small businesses in Amherst and across the country need is the involvement of community members.

As of July, according to a poll conducted by the U.S. Chamber of Commerce, “65 percent of businesses are concerned about having to close their business, or stay closed, if there is a second wave of COVID-19.” The poll also found that of the 500 small business owners polled, 56 percent believe it will take six months to a year for the small business climate to bounce back.

“If you love a store, get there now,” Gould said. She spoke of the hardships faced by small business owners, and the challenge of reshaping the bad-for-business habits quarantine created. “If it takes two weeks to make a habit, and people were stuck at home for 12, habit becomes ‘add to cart,’” Gould said. “It is a struggle to get people to come out.”

The implications go beyond money. “If the world wants a Chili’s world, that can happen,” Gould said, noting the difference between the service and history of shops like A.J. Hastings and big chains. “These [local] businesses are the ones that donate gift certificates, that show up to the block party,” Gould said. “They’re the blood of a community.”

Currently, the Amherst BID is working on a public campaign to keep businesses going, asking residents to pledge to dine in, take out, and stop by their local shops and restaurants. “Instead of ordering from Amazon, walk into Hastings,” Gould said. “Rethink your holiday shopping.”

A.J. Hastings is a modern mom-and-mom shop. It depends on the business of tourists and college students, but also of life-long patrons, whose parents and grandparents may have frequented the shop.

Povinelli said that keeping small businesses like A.J. Hastings open is something for everyone to be involved in. “It’s a slog,” She said, “But we’ll be here as long as people come.”

Carly Pierce can be reached at [email protected]