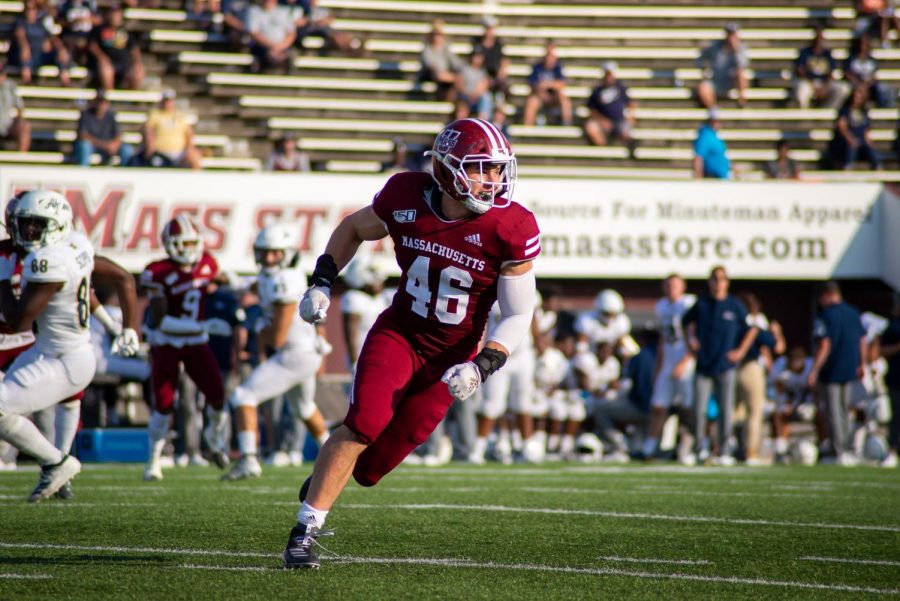 The Massachusetts football team lost its first game of the season, falling 41-0 to Georgia Southern. UMass (0-1) was unable to put together much success on either side of the ball, allowing the Eagles (3-1, 1-1 Sun Belt) to run away with the game early on.

“Obviously the results not what we wanted,” coach Walt Bell said. “But just for us to get to this point, I’m really proud of our kids, proud of our administration for giving us an opportunity to play football.”

The Minutemen defense forced a third-and-short on its first series of the game but were unable to stop the Eagles triple-option on third down. After moving the chains, Georgia Southern quarterback Shai Werts found receiver Malik Murray wide open for a 47-yard touchdown on a play-action pass.

Werts found success time and time again, throwing for 128 yards and three touchdowns, adding another 76 yards and a touchdown on the ground.

“There’s a speed aspect to it, you don’t catch up to until a drive or two into the game,” Bell said of the defensive performance. “You do everything you can to help survive it. We didn’t help the defense very much offensively, which kind of made matters worse knowing those guys were out there for a while.”

Redshirt senior Mike Fallon got the starting nod at quarterback for the Minutemen, providing most of their first half offensive production. Fallon looked comfortable at the helm, completing four of his seven first half passes for 27 yards. Heading into the half, Fallon also led UMass in rushing yards with 31.

Beyond Fallon, the Minutemen offense struggled mightily as the offensive line suffered in the trenches. As a result, leading halfback Ellis Merriweather was unable to produce much, rushing 16 times for a total of 21 yards.

On the first offensive play of the second half, Mike Fallon hit receiver Samuel Emilus in the hands, who tipped the ball in the air and into the arms of Eagles cornerback Derrick Canteen for an interception. The Eagles added a field goal to bring their lead to 31-0.

Throughout the second half, the quarterback carousel was in full effect for the Minutemen. In addition to Fallon, redshirt sophomore Josiah Johnson and true freshman Will Koch split snaps at quarterback.

Johnson showed promise on a nine play, 38-yard drive midway through the third quarter. On perhaps the most exciting play of the game for the Minutemen, Melvin Hill snagged a one-handed pass from Johnson on fourth down and two to extend the UMass drive. Johnson marched the Minutemen within the Eagles’ 30-yard line but underthrew a would-be touchdown up the seam for a Georgia Southern interception.

Koch took over the helm for UMass midway through the fourth quarter, but the Eagles had run far and away with the score. The freshman quarterback finished with a four rushing attempts for a team leading 41 yards, but his rushing efficiency came too late as time expired for a 41-0 Eagles victory.

“Our kids have done an incredible job,” Bell said. “Those guys want to play. I can’t wait to get back together with them, watch the tape. The staff can be critical of ourselves; our kids can be critical of themselves on what they need to improve on and go get better. We have to take all these young players and make them older. Whenever we get another chance to play, we’re ready to go.”