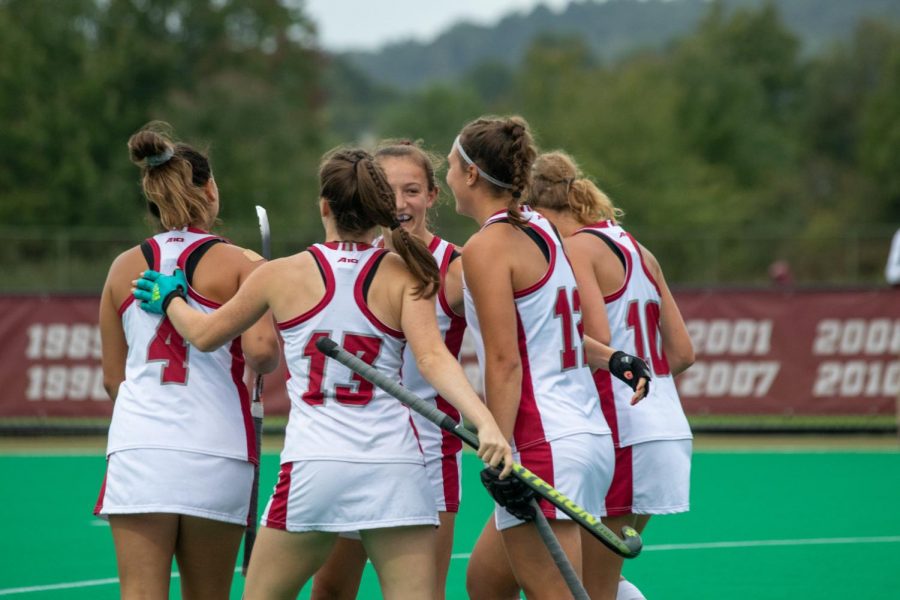 The Massachusetts field hockey team is back to practicing with a full group, although things look a little different thanthey did last season.

The COVID-19 pandemic has derailed a lot of sports teams across the country and the Minutewomen were not an exception. UMass has announced its intention to play a field hockey season in the spring of 2021.

While these are not ideal circumstances for head coach Barb Weinberg and the Minutewomen, they are excited to even have a season at all. A cancellation looked likely earlier in the summer.

“I think there was the initial disappointment of our season being cancelled,” Weinberg said. “But then when we thought we weren’t even going to be able to train, we’re just happy to be back now.”

Just getting back to practice was a tall task for UMass: It started out forming practice pods with roommates and team meetings were completely virtual.

After two weeks and continuous negative COVID-19 tests, the Minutewomen were able to expand their practices. Now, all 15 on-campus players are allowed to practice at once, splitting the field in half so that there were less than 10 players on each side.

“Now we’re all training together, still sanitizing protocol,” Weinberg said. “So sanitizing our hands and sticks, getting our temperatures checked, and then our players stay masked up for pretty much the entire practice.”

UMass faced another unique challenge this year: figuring out how to keep its international players involved. Eight players from different parts of the world elected not to return to campus this fall.

“We do individual meetings with them on a weekly basis,” Weinberg said. “And then every Thursday and Friday we have team Zoom calls.”

This September, the UMass football team announced that it would reverse its decision to play a spring season and start scheduling games in the fall. However, the Minutewomen and Atlantic 10 were in no rush to put together a field hockey season.

“The A-10 left a blurb in there when they cancelled our fall season to leave us a possibility of coming back,” Weinbergsaid. “But as time has gone on it looks way more likely that our season is going to be pushed to the spring.”

Despite the challenges that the pandemic has brought forward, there are some good things that have come from the decision to play in the spring, specifically for younger players.

“One positive we talk about almost every day as a coaching staff is we literally have a three- month preseason with our freshmen,” Weinberg said. “Typically, they come in their first year and we have 14 days to prepare them… so you’re going to see a huge development curve with our freshman class.”

The long preseason gives the Minutewomen a lot of time to bond with their new players on and off the field, and the commitment to their craft, particularly from the freshmen, has not gone unnoticed.

“All the freshmen actually have done a great job,” Weinberg said. “They set the standard from day one of this fall training and I think in that first week of practice you wouldn’t even notice that they were freshmen unless you knew.”

One player in particular who continues to turn heads as a sophomore is Josie Rossbach. The center back played nearly every minute for UMass last season and is expected to have an even larger role this year.

“Josie is one of those players who leads by example,” Weinberg said. “She’s someone that is going to continue to elevate her play and help to elevate her teammates around her.”

Another young Minutewoman to keep an eye on is freshman Claire Danahy. The Massachusetts native will see a lot of playing time this spring, similar to Rossbach’s freshman year last fall.

“She’s a very talented player,” Weinberg said. “With her skill on the ball and her ability to read the game on attack and defense, she’s going to play a key role for us.”

UMass field hockey is slated to return to action in the spring, provided it is deemed safe to do so by the NCAA, the A-10 and the University itself. Details on its schedule are still to come.