No full practice for UMass until Sunday 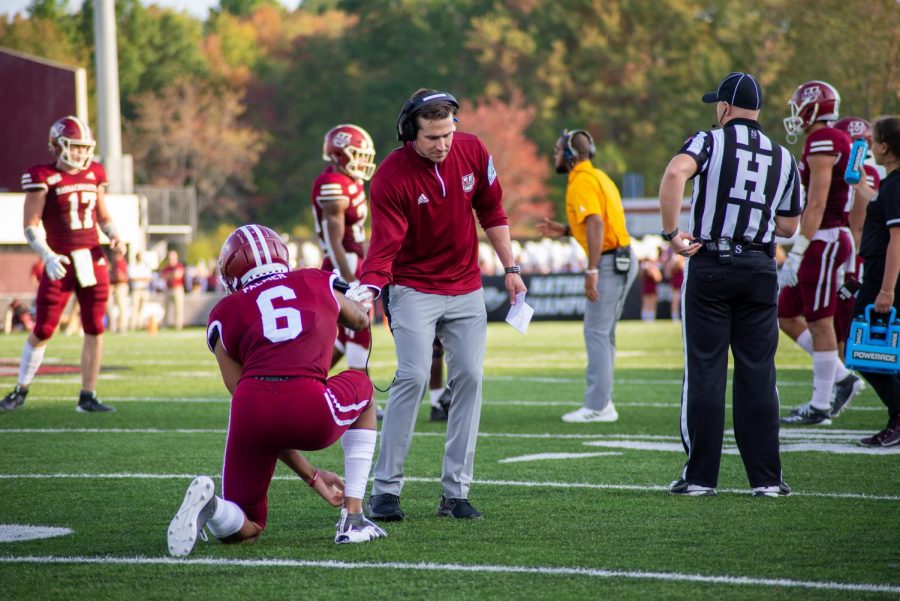 After a 41-0 loss at Georgia Southern, things are not becoming easier for a struggling Massachusetts football team. Every member of the team must have three negative tests before practices are able to resume.

Head Coach Walt Bell and his staff have not had any in-person meetings with players, as they are in quarantine in their dorm rooms.

“We had our test Monday and they were all negative, we have another round of testing today and another round Friday,” Bell said to reporters on Wednesday. “So we won’t be allowed to resume football activity until we get the entire weeks’ worth of testing as negative. All together as a football team, we won’t be able to practice again until Sunday.”

Practice on Sunday will allow The Minutemen two weeks until its next scheduled opponent on Nov. 7 when they play Marshall.

Quarantining has left players with considerably less overall interaction with coaching staff, having to resort back to Zoom meetings.

“We’ve done some meeting-type stuff,” Bell said. “But again, there’s only so much of that that you can do, and we’ve been doing it since March. We need physical repetitions badly.”

Since the season was resumed a few weeks ago, the University of Massachusetts has had 14 total practices, leading to a young Minutemen team to not have a complete grasp on the playbook for the Eagles.

“Going into the game with really limited practice opportunities, we really wanted to try and run the football early. Try to minimize the game, minimize the shot-clock and be as close for as long as we could,” Bell said via Zoom. “[We] didn’t do that. When you don’t do that you don’t really have an opportunity to do very much at all.”

UMass finished the game with 32 rush attempts for 111 yards, 90 of those coming from the three quarterbacks who played on Saturday in Mike Fallon (4/31), Josiah Johnson (5/18) and Will Koch (4/41). The Minutemen also had 21 pass attempts, with seven through the first half.

Offense was where Bell felt most of his team’s problems came on Saturday, being unable to put any points on the scoreboard.

“It was a little bit of a blender inside, there was a lot more movement than we expected, and we didn’t handle it well,” Bell said. “That’s somewhere we’re going to have to improve because once you put it on tape you know that you’re probably going to see more of it down the line.”

The quarterback situation remains the same as Saturday, as Bell says it’s “more up to them than it is to us.” Bell continues to speak well about all three quarterbacks but wants one to solidify himself as the unquestioned leader.

The head coach primarily talked about the two younger quarterbacks in Johnson and Koch, as they haven’t been able to have nearly as much time and familiarity with the system in comparison to the redshirt senior Fallon. Bell referred to Johnson and Koch as “green” because they’ve had such short time to learn the playbook. This situation could potentially turn into a scenario where all three quarterbacks will play until one of the two younger options emerge from the group.

Consistent practice will be difficult to come by this season for UMass, with three scheduled away games, meaning at least three weeks of quarantine throughout the season in order to follow guidelines set by the University.

“Hopefully we’ll be able to start doing some conditioning outdoors in smaller groups today,” Bell said. “Nobody else in the country is having to deal with it, but we are and that’s okay.”

Joey Aliberti can be reached at [email protected]