Defense stands out for UMass in 24-2 loss at FAU 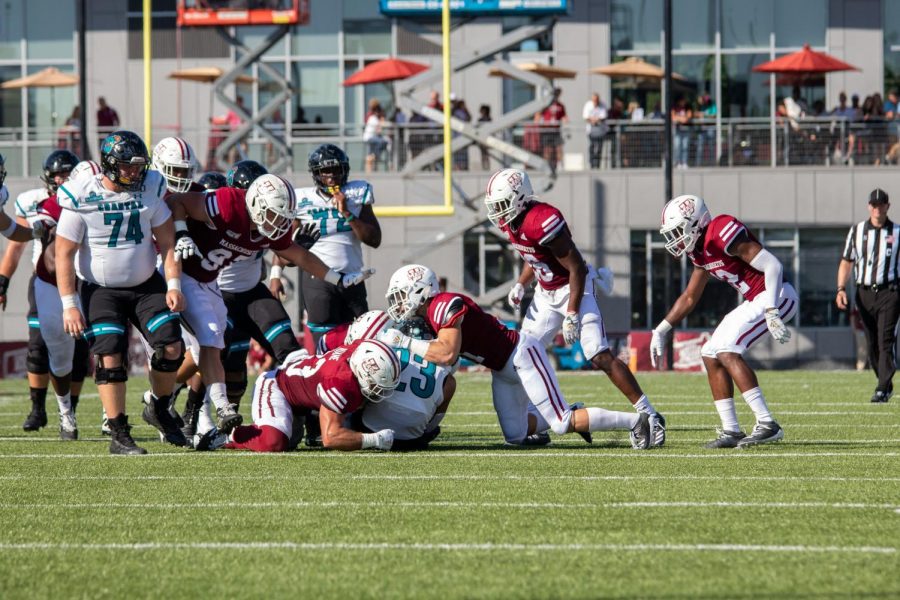 Before its matchup against Florida Atlantic, the Massachusetts football team was on a streak of nine games of allowing its opponents to surpass 40 points.

“It’s our best defensive effort since we’ve been here,” said Head Coach Walt Bell. “With the exception of a deep ball and then the power read they hit for a score, that’s good team defense.”

UMass recorded six sacks and 14 tackles for loss, the most it has had since moving up to the FBS. Pressure was primarily led by seniors Jake Byzcko and Avien Peah, who both had three tackles for loss and a sack.

Peah has been the most disruptive Minuteman this season, coming into the game with six tackles for loss and another sack.

“He plays with a chip on his shoulder,” Bell said. “That’s what is going to truly allow you to play great football. How you prepare and how you invest and he does that every single day.”

Byzcko has been sidelined with injury this year, meaning playing time had been limited until this week.

“It’s been great to have him back,” Bell said. “To see how hard he’s worked… he’s a kid who absolutely deserves it.”

UMass has not allowed less than 200 rushing yards since its win over Akron.

“I think for the first time since we’ve been here in 19 months, we started to see kids actually play with some confidence,” Bell said. “To me that’s the exciting part, and hopefully we can build on that success because seven days from now we’ve got another great offense.”

“He was beat up tonight,” Bell said. “He came in there [after] he hurt an ankle the other day. Just a testament to his will.”

For large parts of the game, the Minutemen played cover zero, where there is no player in zone coverage, rather defensive backs are assigned a man while everybody else is rushing the offense.

“We knew we were going to sell out and stop the run,” Bell said. “It’s not necessarily simple to play cover zero as much as we did.”

Though losses have continued to pile up for Bell since he’s arrived in Amherst, defensive efforts like this force him to not resist the upside he sees in his football team.

“We’re going to have a damn good defense in the future.”