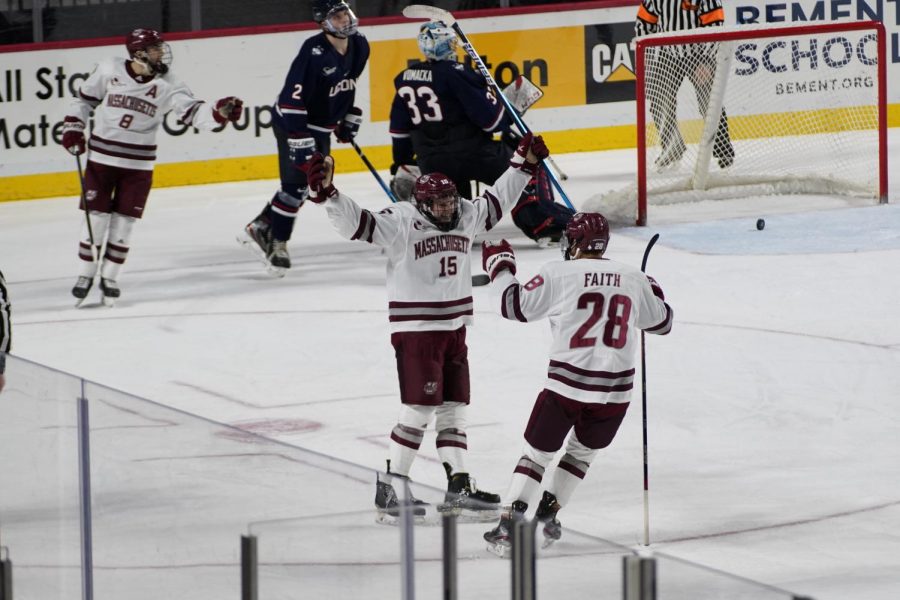 A lot looked different at the Mullins Center on Friday. With the stands empty and players wearing masks, the Massachusetts hockey team’s 5-1 win over Connecticut was hardly recognizable compared to games in years past.

After losing its two top scorers—John Leonard and Mitchell Chaffee—from a season ago, there was no doubt the Minutemen would need to see newcomers step up to beat UConn (0-1, 0-1 HEA) on Friday.

UMass fans might’ve known that incoming freshmen and transfers would have to step into the gaps that players like Leonard and Chaffee or even Jake McLaughlin and Jack Suter left, but they probably didn’t expect players like Ty Farmer and Philip Lagunov to be healthy scratches.

In the absence of usual veterans, new Minutemen appeared multiple times on the scoresheet, powering the team to a season-opening win.

Freshmen and transfers were scattered throughout Carvel’s lineup, with all eight new members of the UMass team dressing on Friday.

Freshman Josh Lopina was the first of the newcomers to make a play. On the 5-on-3 power play early in the first period, Lopina played the puck from behind the net to Cal Kiefiuk who gave the Minutemen a 1-0 advantage.

Minnesota transfer Garret Wait was the next to out his name on the scoresheet, this time breaking a 1-1 tie toward the start of the second period.

Oliver MacDonald wouldn’t be outdone as the freshman found the back of the net on a wrist shot with next to no angle at the net midway through the third period.

“I thought they performed well,” Carvel said of the newcomers. “Josh Lopina, he’s a big strong kid, so I thought he transitioned well. Oliver MacDonald is a kid we think can score and that puck went in, I’m not quite sure how, but there’s a saying that the puck just goes in for some guys and we’re hoping he’s one of those guys.”

Newcomers on the night totaled five points thanks to two goals and three assists.

On top of new faces playing a key role in the UMass offense, the Minutemen played two freshmen on the third pairing while veterans Ty Farmer and Kolby Vegara sat. The pair was part of a solid defensive effort for the team, holding the Huskies to just one goal on 22 shots.

“Aaron Bohlinger had two assists and Linden Alger played pretty well for a kid that wasn’t expected to come in here and play right off the bat,” Carvel said of the new d-men.

Even players who didn’t grace the scoresheet impressed on Friday night. Freshman Ryan Sullivan nearly nabbed himself a goal in the closing minutes of the game while St. Lawrence-transfer Carson Gicewicz made his presence felt with his physicality on both ends of the ice.

With new faces abound, it would be easy to have Friday’s performance come as a shock. Carvel on the other hand, wasn’t the least bit surprised.

Usually one to harp on the adjustment of jumping from the USHL to the NCAA, Carvel instead saw good reason for his youngsters to have already gone through some of the expected growing pains.

“They’ve had three months of practice and we didn’t have to shut down,” Carvel said. “Those kids have been having to compete against Jake Gaudet, Marc Del Gaizo and Bobby Trivigno. Those freshmen had quite a run up to the first game, so I’m glad they performed as they did.”