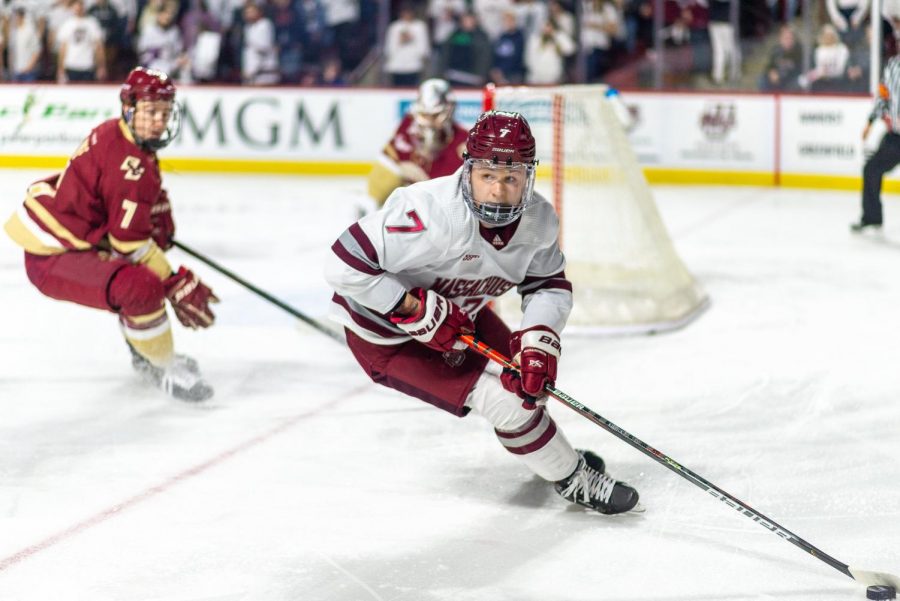 On three separate occasions, Boston College held a lead over Massachusetts on Friday night. Through two periods, the Minutemen had managed to claw back to tie the game twice.

With an offensive zone draw and the goaltender pulled, BC (1-0) managed to win the faceoff and dump the puck the length of the ice. In a foot race to extend the game, the Eagles got to the dot first, negating icing and letting the few remaining seconds tick off the clock to secure the 4-3 win.

“That was a good college hockey game between two good teams,” Minutemen head coach Greg Carvel said. “It was impressive that we fought back from down two goals.”

BC earned its first lead of the game with just over four minutes left in the opening frame when senior Logan Hutsko carried the puck into the o-zone. After toe dragging around a defender, Hutsko dished to Jack McBain on his left who deposited the puck behind UMass goaltender Matt Murray to go up 1-0.

An early penalty on Carson Gicewicz put the Eagles on the power play. Down a man, UMass managed to control the puck with Zac Jones skating the puck up the left side. Jones unleashed a quick wrister that beat BC goaltender Spencer Knight high glove side to tie the game at one.

The Minutemen momentum wouldn’t last however. Still on the power play, BC sophomore Matt Boldy tucked away a Mike Hardman pass from across the crease to retake a one-goal lead.

McBain’s night wasn’t done as the junior tallied his second lamplighter of the night midway through the second. The Toronto native threw on the brakes on an odd-man rush and buried a quick wrist shot from the slot.

“It’s hard when you have two injuries to defensemen—especially Marc Del Gaizo,” Carvel said. “It would’ve been helpful to have him out there tonight. I thought some inexperienced d-men tonight made some mistakes—which they’re going to do, which is fine. That’s the reality of it.”

Down two goals, UMass refused to go away. The comeback started with just under five minutes left in the second period. Colin Felix found himself pressured near the blue line and sent a shot on net. Freshman Josh Lopina managed to get his stick on the shot and redirect it just enough to beat Knight and cut the lead to one.

“It was a nice job by Colin Felix and a good deflection,” Carvel said.

Just over a minute later, the Minutemen evened things up. Once again, the goal came off the stick of Josh Lopina. This time, the freshman’s goal came courtesy of Bobby Trivigno. Trivigno raced down the ice to negate an icing call and then played a pass from the corner to Lopina in front of the net who put home his second goal of the night.

“I think we were just executing what we wanted to do,” Carvel said of his team’s two-goal comeback. “It’s always the case, if you make mistakes, it’s in your net and if you execute, you’re usually finding ways to score.”

Early in the third period, the Eagles connected on a stretch pass to Boldy entering the zone. The BC forward split UMass’ defenders and buried a wrist shot past Murray’s glove, regaining the lead 4-3.

“I thought in the third period we didn’t give a lot,” Carvel said, “other than the breakdowns by us.

“With the couple breakdowns that we had you saw BC, they don’t need a lot of chances to put it in the back of the net.”

Murray stopped 28 Eagle shots on the night—one fewer than the Minutemen needed on the night. The four goals allowed also tallied one more than Carvel expects of his netminders, consistently harping on letting in three or fewer.

“We needed a really good goaltending performance tonight,” Carvel said. “We didn’t get it to happen.”