Breen had a career-high 31 points, including 13 in the fourth quarter 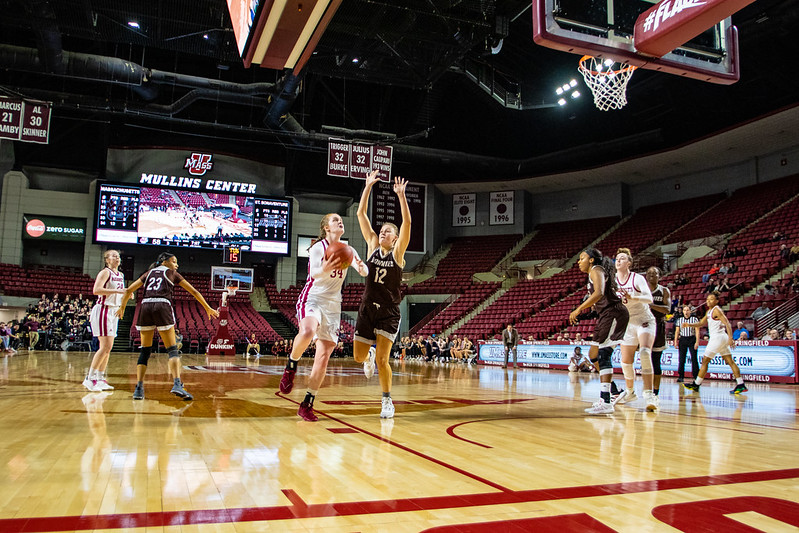 With six minutes to go in the second quarter, Sam Breen was subbed out after her third foul as the Massachusetts women’s basketball team found themselves down 21 to a red-hot Boston College team. Although Breen played just nine minutes in the second and third quarters, she finished the night with a career-high 31 points on 19 shot attempts. 13 of those points came in the fourth quarter with Breen just one foul away from being taken out of the game as UMass forced overtime.

“I had the open shots and I took them, and luckily, they were falling,” Breen said of her fourth period performance.

During that fourth quarter, Breen showcased all of the tools she flashed last year as the team’s leading scorer, all while not forcing shots and playing as an integral part of the offense rather than its sole catalyst. Those 13 points came on just five shots attempts and a free throw, including two 3-pointers and a mid-range jumper.

“We did a really good job of executing and finding her, and getting her open and getting her those looks,” said head coach Tory Verdi after the game. “I think she’s one of the best scoring forwards in the A-10.”

Breen was unable to carry her momentum to the overtime period as UMass (1-1) was thoroughly outplayed by Boston College (2-0) in the final five minutes. She had just three points in overtime—all of which came in the last minute with the outcome all but locked up.

“[Boston College] started denying me a little bit more, so it was a little bit tougher to get those open shots,” said Breen of her relatively quiet final stretch. “I think we had good shots and good looks in overtime, but they just weren’t falling like they were in the fourth quarter.”

After this contest, Breen is now averaging 24.5 points per game on an efficient 59 percent from the field and is the third leading scorer in the A-10 Conference. But the senior captain doesn’t care much about her scoring output if it doesn’t lead to a win.

“Honestly, five points or 30 points, [I’ll do] whatever the team needs me to do,” Breen said. “If they need me to score, I’ll score. If they need me to rebound, I’ll rebound. So honestly, [today’s performance] doesn’t really affect my confidence in any way.”

After more than a week off, a level-headed Breen and the rest of the Minutewomen will look to bounce back against New Hampshire on Dec. 10. Tipoff in Durham is scheduled for 6 p.m.

Freeman Alfano can be reached at [email protected] or followed on Twitter at @freemanalfano.