Short defensemen, UMass forces a shootout but loses to UConn 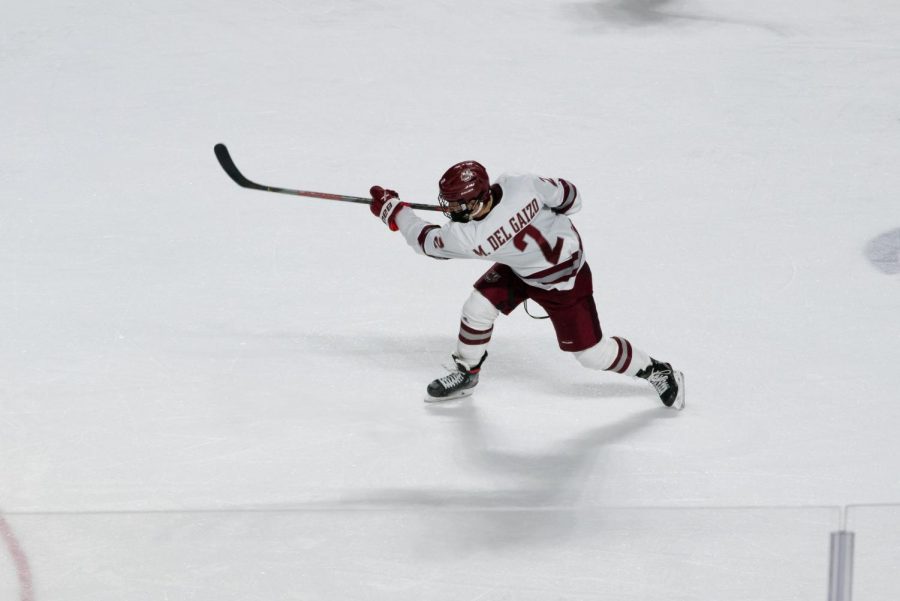 Only two games into the season, the Massachusetts hockey team has already seen the injury bug rear its ugly head.

Looking for the sweep of UConn (1-1) on Saturday night, the No. 7 Minutemen (1-0-1) were forced to play nearly half the game with just four defensemen.

Four defensemen proved to not be enough to topple the Huskies as UMass fell in the first shootout in Hockey East history.

“I thought [the defensemen] managed themselves well,” UMass head coach Greg Carvel said. “We tried to manage the game just so they wouldn’t get stuck on the ice and I thought we did a pretty good job of that. But, gutsy effort by the guys that played.”

The Minutemen lost their first d-man in the first period of the contest—a period that saw them open up a 2-0 lead.

Ty Farmer had to leave the game after UConn landed a big hit on the junior as he tried to carry the puck into the offensive zone. Farmer was making his season debut after being a healthy scratch on Friday night.

Already short Farmer, UMass ran into further trouble in the second period. This time it was Marc Del Gaizo who exited the game, leaving the Minutemen with just four healthy defensemen.

“Its tough when you lose one—we lost one defenseman halfway through the first,” Carvel said, “and then we lost another defenseman in the second. So, I give a ton of credit to the four defensemen that played.”

The thing that kept the Minutemen in the game, however: their penalty kill.

With the man advantage, UConn went 0-for-4. Most notably, UMass found itself in an extended 5-on-3 penalty kill late in the third period clinging to a one-goal lead. With exhausted d-men having logged extra minutes, the Minutemen managed to clear the puck enough times to keep their lead.

All the momentum gained on the big penalty kill dissipated though just three minutes later—with UMass on the power play no less.

“That 5-on-3 kill for us in the third was huge,” Carvel said, “but then to give up a shorthanded goal to let them tie the game was disarming.”

With just two minutes left for the Minutemen and their tired d-corps to complete the unlikely win, UConn’s Brian Rigali dashed the hopes of a UMass victory. Shorthanded, the Huskie forward put away a rebound to tie up the game and eventually send it to overtime.

In the 3-on-3 overtime frame the Minutemen routinely deployed two defenseman and controlled the period despite UMass’ back end running on fumes.

It even looked as if Colin Felix had granted the Minutemen an overtime victory, but his rebound goal was waved off for too many men on the ice.

“I didn’t really see their play drop off,” Carvel said of his defensemen’s play.