Special teams continue to thrive for UMass early in the season 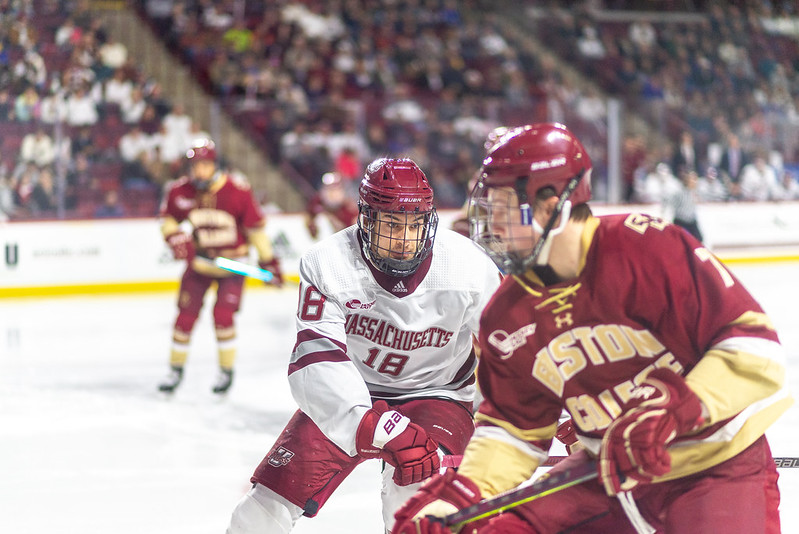 Head coach Greg Carvel has stressed the importance of special teams since before the Massachusetts men’s hockey team began its season. Three games in, that focus has helped the Minutemen tremendously.

No. 7 UMass (1-1-1) scored two goals on special teams in its loss to No. 2 Boston College (1-0), once on a Josh Lopina deflection on the power play, and another by Zac Jones while shorthanded.

“Power play I thought the first half of the game did a nice job,” Carvel said. “The third period, when we needed them to score us a goal, I thought our power play wasn’t very good at all, so for two and a half games I was happy with the power play.”

The Minutemen had plenty of opportunities on the power play outside of their lone goal. Late in the third period, Carson Gicewicz had the puck staring at an open net, before a BC defender dove in to break up the would-be game-tying goal.

UMass finished the night 1-for-5 with the man-advantage, but failed to register a shot on either of the two opportunities in the final frame.

So far this year, four of the Minutemen’s 10 goals have come from the power play. Through their first three games last year, the unit was just 1-for-10, so there has been some improvement this season.

In addition to its efficient power play, UMass held its own on the penalty kill, holding the Eagles scoreless while 5-on-4.

The Minutemen have racked up 17 penalties in their first three games. On the flip side, they have yet to allow a single goal while shorthanded. Their penalty kill unit has actually scored more goals than they have allowed.

With that being said, the unit has seen a little bit too much time this season. UMass is averaging nearly six penalties a game.

“The penalty kill did a great job,” Carvel said. “We have to be able to adjust and respect where there are weaknesses in your game and one of those is penalties. Through the last two games especially too many penalties.”

Having a solid penalty kill has kept the Minutemen out of trouble this season and will be helpful as they try to improve their discipline in the future.

“It’s the first two games of the season, you’ve got to get adapted to each other playing with each other in practice,” Jones said on Tuesday before Friday’s game against BC. “3-for-11 on the first weekend, I think that’s probably a lot better than what we did last year.”

If UMass keeps improving in the special teams department, it will pay dividends as the season progresses.