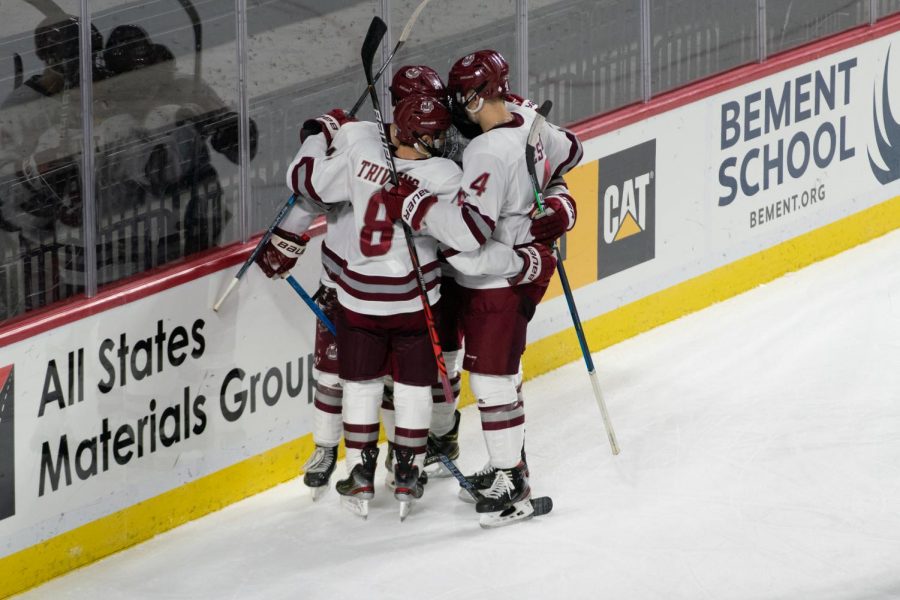 On the one hand, they weren’t even supposed to play Connecticut – Maine was the scheduled opponent until late on Wednesday afternoon.

Then there was the oddity of no fans in the Mullins Center stands Friday night. Saturday afternoon’s game at UConn wasn’t at the XL Center in Hartford where the UConn men’s team typically plays their games. Instead, the second game of the home-and-home was played at their practice rink.

Still, even with all that, UMass came away from the first weekend with a 5-1 drubbing of UConn Friday night and a 3-2 shootout loss on Saturday.

It’s only been two games, but there’s still lots to take away from UMass’ first two games of this odd season being played amidst a global pandemic.

The scoring came from everywhere

With John Leonard and Mitchell Chaffee departing for the NHL, the biggest question facing UMass heading into this year was where would the scoring come from? Greg Carvel explained this past week that the scoring would be by committee and the depth would carry them.

That plan mostly came to fruition this weekend.

Over the two games, UMass had seven different goal-scorers and 12 individuals registered points.

The lamplighters came from all over the lineup Friday night with Cal Kiefiuk, Garrett Wait, Oliver MacDonald, Oliver Chau and Zac Jones registering goals. Saturday saw Matthew Kessel and Phil Lagunov – who was a healthy scratch in Game 1 – score goals of their own.

Something key to note here is UMass doesn’t yet have a distinct first line. Carvel appeared to roll all four fairly consistently over the weekend, slotting in the extra forward to try out new combinations as he went along.

This was also something he stressed in the week leading up to the two games against UConn.

“We’ll have four good lines that can score any night,” Carvel said on Nov. 17.
That quote rang true over the two games.

Lagunov, Chau and Gaudet all stepped up

Even though it’s only two games, the veteran leaders on offense – and the ones who Carvel mentioned had to be better this season – stepped up big over the weekend.

Chau put up three points on the weekend, headlined by a dazzling assist on Garrett Wait’s eventual game-winner on Friday night. The senior was all over the offensive zone in both games, playing his usual style of cycling the puck in deep and creating chances.

As mentioned earlier, Lagunov was scratched from the opener, but penciled in between Chau and Wait on Saturday. Lagunov potted the second goal of the game, while also having a couple more chances in the following 40 minutes. Carvel deployed the senior center during the crucial 5-on-3 late in the game, which UMass successfully killed. He also went an impressive 11-for-17 on draws – an important stat in the eyes of the UMass coaching staff.

Gaudet didn’t register any points this weekend, but found himself on ice for crucial faceoffs, such as the start of overtime in Saturday’s shootout loss. The senior captain went 19-for-34 in the faceoff dot over the two games – not too bad.

The UMass forecheck played a factor

With under two minutes remaining in the second period in Saturday’s game, the line of Carson Gicewicz, Reed Lebster and Kiefiuk had the Huskies on their heels.

For over 40 seconds, the trio, along with Colin Felix and Aaron Bohlinger, held UConn in their own end, generating multiple scoring chances and thwarting any chance the Huskies defenders had at clearing the puck.

That shift led to UConn forward Kale Howarth, who was on the ice for the entire shift, taking a slashing penalty out of frustration with less than a minute remaining in the period.

It was pressure like that that UMass took to UConn all weekend, but especially with the smaller ice surface on Saturday night.

“I think the strategy was which team could get into the offensive zone because both teams were having a hard team getting the puck out,” Carvel said after Saturday’s shootout loss. “I was happy with the way we got in, got on top of them. Again, small ice, things happen quickly, it’s possession. When you play in our rink, you have possession for longer amounts of time and that’s what I was concerned about with our guys, having to play without the possession time. I thought once we had the puck in the o-zone, we did a lot of good stuff.”

The minute UConn forward Cassidy Bowes turned the puck up ice and led a shorthanded 2-on-1 with a little over two minutes to play, you just knew. You knew that despite Filip Lindberg being in the net and Kessel being the lone d-man back, that puck was going to find its way in somehow. And then, of course, it did, as the Huskies turned UMass’ power play on its head, tying the game, 2-2, Saturday afternoon.

On the weekend, UMass went 3-for-11 on the man-advantage, which is a really good start for a team that finished No. 55 out of 60 teams when it came to power play percentage last season.

The Minutemen generated lots of chances from the slot and worked the puck near the blue line really well.

The two forward units were MacDonald, Kiefiuk and Lopina and then the more experienced crew of Chau, Lebster and Bobby Trivigno. On defense, the Minutemen rolled with Marc Del Gaizo and Bohlinger on one pairing, and Kessel and Jones on the other. Colin Felix stepped in for Del Gaizo when he was injured midway through Saturday’s game.

There’s still lots of work to be done but for the most part, it looks like an improved unit from last year despite not having Chaffee or Leonard.

If you were to poll UMass fans, almost no one would be surprised at the effort the UMass defensemen turned in this weekend. That was supposed to be one of the definites heading into this season: no matter what scoring troubles the top-six went through, the defense would always be there to back them up.

Through two games, the defensive core of the Minutemen looks as strong as ever. Del Gaizo, Felix, Jones and Kessel all look to have taken massive steps forward this year. The pairing of Jones and Kessel looks like it could be UMass’ best all-around d-pairing, given just how much better Kessel and Jones look through two games. Both are much more confident with a year of service time under their belt.

Bohlinger is extremely dynamic and showed no signs of nervousness when it came to carrying the puck and taking chances in the offensive zone. Carvel has no issues deploying the freshman in big offensive situations.

Linden Alger looked steady in his debut Friday night and we didn’t get enough of a look at Ty Farmer, who was scratched Friday and then replaced Alger in Saturday’s lineup, only to get injured midway through the first period and not return. Later in the Saturday game, Del Gaizo also was injured, leaving the Minutemen with four defensemen. Felix, Jones, Kessel and Bohlinger all stepped up and ate up the minutes that would’ve been had by Farmer and Del Gaizo.

It’s safe to say UMass’ defensive crew will be far from a weakness this season.

UMass has what many consider to be the best goaltending tandem in college hockey with Matt Murray and Filip Lindberg. It’s also very well possible the Minutemen have the two best goalies in Hockey East.

Both goaltenders turned in solid outings this weekend.

Murray made 21 saves on 22 shots in Friday’s win, garnering high praise from his coach.

“It’s been really enjoyable watching Matt mature as a goalie,” Carvel said of Murray after Friday’s win. “His fourth year now, he’s very professional, very methodical and he looks very calm in the net. As a coach, I always like goaltenders that are either calm or really confident and Matt into the very calm. Let’s the game come to him. I thought he looked really under control.”

Carvel will be the first to tell you he hates talking about goaltending because he’s far from an expert on the subject. That’s why he often defers to assistant coach and former goalie Jared DeMichiel on anything to do with the men in between the pipes. For the bench boss to say that about Murray is a big deal.

Not to be lost in all this is Lindberg who turned in a 35-save effort in Saturday’s shootout loss.

Both goalies looked poised in the net. It’s hard to tell off of just one game for each of them, but neither looks to have regressed at all. Only time will tell if this holds true. My guess is it does.

The NHL proved the 3-on-3 format to be the best way to do overtime, and Saturday proved that it will be equally exciting in Hockey East.

Even though UMass didn’t end up winning in the shootout Saturday, Felix basically did score to win it in overtime – the only problem was it was overturned due to too many men on the ice for the Minutemen.

Nevertheless, UMass was the much better team than UConn in overtime and there’s a large reason as to why: The personnel Carvel has at his disposal are perfect for 3-on-3 hockey.

You can go up and down the UMass lineup: Trivgino, Jones, Kiefiuk, Chau, Lebster, MacDonald and Bohlinger just to name a few. All are shifty and great skaters. They prioritize possession of the puck and are at their best when forced to be creative in the offensive zone. Add in the complementary pieces like Kessel, Felix, Lopina and Gaudet, and the Minutemen have themselves a dominant crew for the 3-on-3.

Take this overtime sequence for example.

Lopina bought enough time for the Minutemen to make two changes while in the offensive zone. Felix walked the blue line and with nothing open, took it to the half wall. Rather than staying back and playing it safe, Jones reads what Felix is doing and goes straight to the net, coming very close to winning it on his backhand.

It’s plays like this that will ensure UMass as a team that doesn’t dread going past minute No. 60 and playing in overtime.