UMass defeats Bryant 82-54 on the road 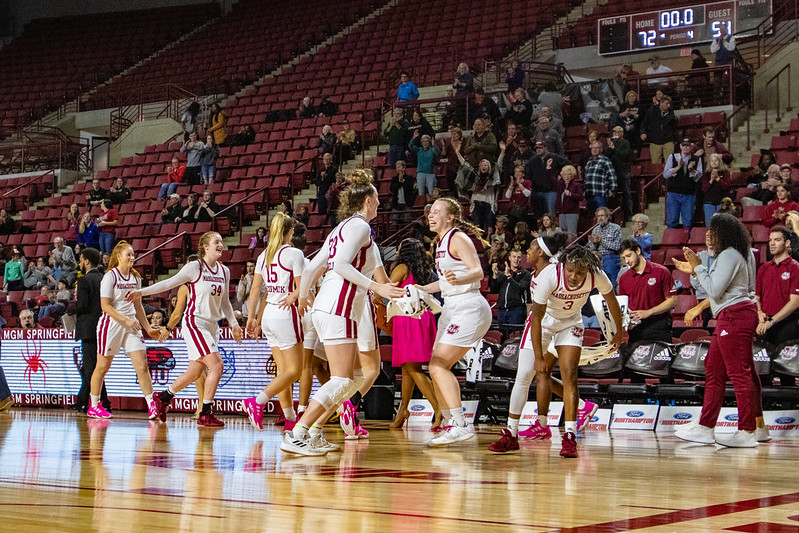 Sophomore guard Sydney Taylor more than doubled her career-high tonight with 24 points as the Massachusetts Women’s Basketball team beat the Bryant Bulldogs 82-54 in  its season opener.

Taylor shot 64 percent from the field and hit five triples after playing sparingly in her freshman year. Her 24 points were also a team-high for UMass (1-0), as senior Sam Breen played second fiddle with 18 points and 13 rebounds.

“She did everything that I knew that she could do,” Head Coach Tory Verdi said of Taylor’s performance. “She’s worked her tail off and she’s put herself in a position to do many great things, and she showed that here tonight.”

Verdi turned some heads at the Minutewomen’s press conference yesterday when he said Taylor, an unproven sophomore, had to fill the shoes of the now-departed Hailey Leidel, who is second on the all-time UMass Women’s Basketball scoring leaderboard. But Taylor quickly proved that she is capable and confident of doing so.

“[Hailey Leidel] is one of the best players to ever play at UMass,” Taylor said. “I just had to be confident and be myself and the shots will come… I was ready for it.”

Breen, who was expected to come out as the focal point of the offense, played unselfishly, finishing with four assists. Her frontcourt partner and fellow captain Maddie Sims added 13 points in her debut as a Minutewoman following a transfer from Siena College.

“Her and Sam [Breen] together are great bigs, I think,” Taylor said of Sims and Breen in the frontcourt together. “Maddie [Sims] has something to prove, and she’s going to continue to prove it.”

UMass dominated from the start in this one as its defense held Bryant (0-1) to just 20 first-half points. This was, in large part, due to forcing bad passes and putting pressure on ball handlers, as the Bulldogs had 17 turnovers in the first half compared to just four assists. This stifling defense was on full display in the second quarter when Bryant shot 18 percent from the field for just nine points.

“We needed to have great ball pressure, especially on top of the perimeter, but I thought we did a great job of flying around,” Verdi said of the team’s suffocating defense. “It just goes to show you the level of energy that we entered with today.”

On the other side of the ball, the Minutewomen were hyper-efficient on offense, especially from deep. Taylor and bench guard Madison Lowery combined for all of UMass’ eight made triples,  finishing 53 percent from beyond the arc.

“Me and Madison [Lowery] didn’t play as much last year, so us getting to perform and show what we can do is a big accomplishment,” Taylor said. “We just keep each other motivated so we can hit more [threes].”

The Minutewomen will head back to Amherst to take on Boston College this weekend. Like UMass, the Eagles finished with 20 wins last season and should be a tougher test than Bryant.

The Minutewomen play Boston College at Chestnut Hill this Saturday at 2 p.m.