UMass’ defense struggled in its second straight loss to BC

Minutemen allowed double-digit goals in the doubleheader against the Eagles 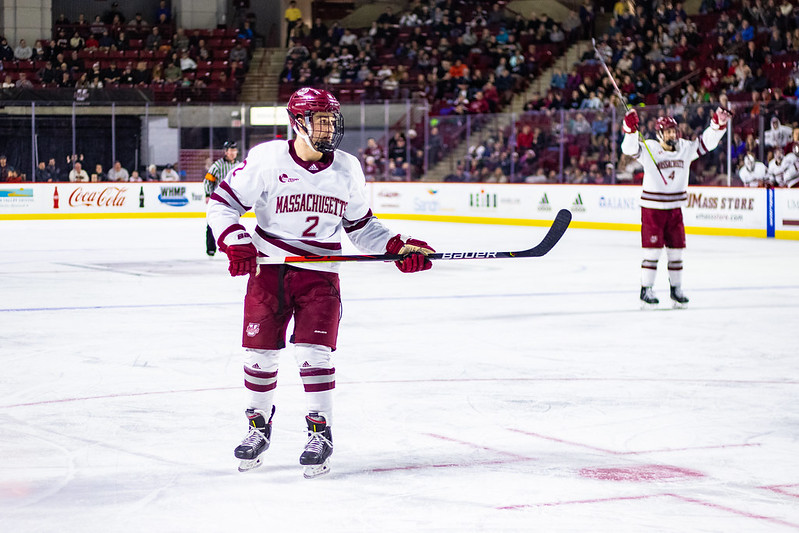 The Massachusetts hockey team allowed 10 combined goals in its two games against No. 2 Boston College over the weekend, dropping both contests.

No. 7 UMass’ (1-2-1) defense has been the backbone of head coach Greg Carvel’s team, and he wouldn’t have it any other way, stressing that defense is what wins games in the Hockey East.

On Saturday however, that defense struggled to stop the Eagles’ (2-0-0) fast paced offense in the first two periods, allowing two goals in each of those frames.

“The chances they got were high end,” Carvel said of the Eagles. “We knew that was going to happen, if they get good scoring chances it’s going to be in the back of the net.”

The third period looked a little bit better for the Minutemen, holding BC without a goal in the first 13 minutes of the period before breaking down once again and allowing the Eagles to regain their two-goal lead with just under seven minutes to play. BC would add another goal on an empty netter with just 10 seconds left in the game.

UMass’ struggles in its own end were in part due to three major missing pieces from the lineup in Ty Farmer, Reed Lebster and Marc Del Gaizo, all out with injuries. Lebster being the most recent loss, suffering his injury in Friday’s game against BC.

Farmer was a healthy scratch in the opening game for the Minutemen, and was injured just halfway through the first period of his first game. There is currently no timetable for his return.

Del Gaizo however played a large role in UMass’ first two games, until he got injured in the second period of his second game against UConn. Carvel considered him to be the best player on the ice until his injury.

“It really hurt not having Marc Del Gaizo and Ty Farmer, and we lost Reed Lebster,” Carvel said. “The back end is really the strength of our team, and then when you take a third of that out of the lineup, it’s tough.”

Those holes on the defensive side did no favors for UMass in either of its games against the Eagles, allowing four goals in the first matchup. Many of those goals came in transition thanks to BC’s speed up the ice.

If there was a silver lining to the back-end play on Saturday, it would be the transition defense, which was improved in the second contest.

“We addressed it, we made some adjustments,” Carvel said. “Last night we weren’t in position and they took advantage of us. Tonight we were in better position.”

As far as where to go from here, it will be back to the fundamentals next week as the Minutemen aim to get back to the way they played in the first two games of the season defensively.

“Checking details are huge and it’s a big part of competing,” Carvel said. “I think our kids are working hard and they want to do the right things, but our attention to detail on checking is not good enough. Not at the level it needs to be.”

Before the season started, Carvel explained that UMass would need to be solid defensively, because its offense would be without a star player and more of a team effort than in the past two years. This weekend it was the offense that kept the Minutemen alive, with the defense lacking.

“We scored three goals last night and three tonight, I think we can score enough to win,” Carvel said. “But we’re not playing well defensively enough right now to win.”