Carson Gicewicz continues to prove his worth to UMass 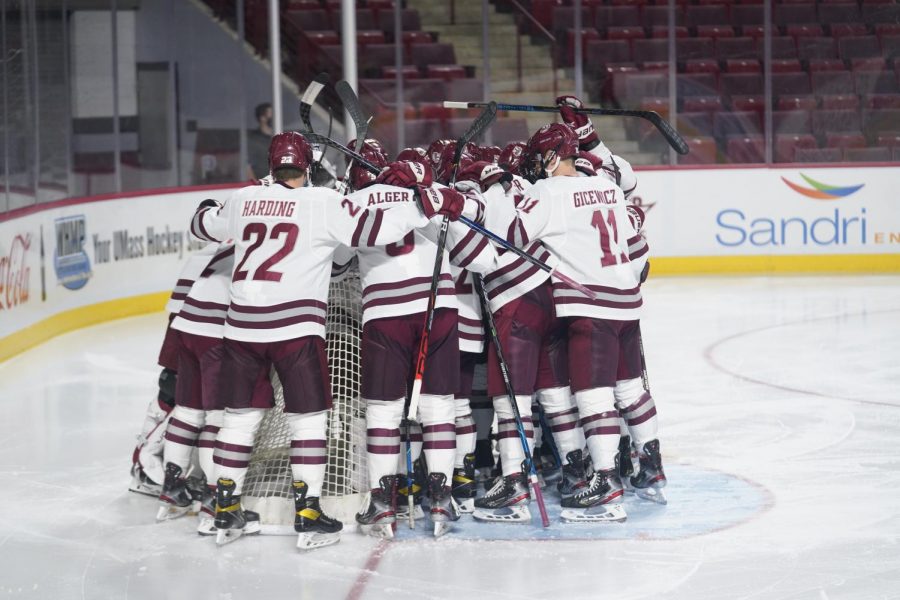 Five minutes into the third period, momentum looked to be all Connecticut’s. The Huskies had just scored two goals in a 1:09 stretch to cut Massachusetts’ lead to 3-2 and seemed poised to continue their comeback.

Sitting in the slot on the 5-on-4, Gicewicz took a pass from Zac Jones and redirected it toward the net. The puck had just enough mustard on it to beat UConn (1-4-1, 1-4-1 HEA) goaltender Tomas Vomacka and put the Minutemen back ahead by two goals.

One goal wasn’t enough for the St. Lawrence transfer, however.

With just under eight minutes left in the contest, Gicewicz forced a Huskie turnover on their own blue line. No. 11 then won a footrace to the puck, earning himself a breakaway at the other end. A fake slapshot froze Vomacka just long enough for a quick wrist shot to find the back of the net and bring Gicewicz’s goal tally on the night to two.

Behind the winger’s two third-period goals, UMass pulled away and topped UConn, 6-2, for its third-straight win.

Gicewicz controlled play so thoroughly at times on Wednesday that even his own coach might’ve overestimated his actual on-ice production.

“I think [Gicewicz] had a hat trick,” Carvel said. “His energy and every shift on the ice tonight felt like he was making things happen for us either physically or making plays.”

The redshirt senior led the team in blocked shots on a night where the Minutemen stopped 21 Huskies’ shots from reaching goal.

Gicewicz’s two-way performance wouldn’t have been complete, however, without setting up some plays to showcase his playmaking. So less than a minute into the second period, with UMass on a power play, Gicewicz faked a shot from the right faceoff dot. The fake managed to draw the attention of both a UConn defenseman and goaltender, freeing up space for him to slide a pass across to Matthew Kessel who buried the one-timer to give the Minutemen a 2-0 lead.

The three-point performance is emblematic of a shift in Gicewicz’s game over the past few weeks as the transfer has slowly grown into his role as a point producer—a role that coincides with his switch from center out to the wing.

“It became obvious to the staff that we needed to get him on the wing,” Carvel said. “We needed to get him in more predictable situations and help him find a comfort zone. He’s quickly becoming our seemingly most important player. The fact that he plays with size, he’s making plays, he’s scoring goals.”

This week alone, No. 11 in maroon and white tallied five points thanks to Wednesday afternoon’s performance and a two-goal game against Vermont on Sunday. Four goals in two games propelled Gicewicz to the top of the Minutemen’s goal-scoring leaderboard, further cementing his role as one of UMass’ more important pieces.

“Beyond that though,” Carvel said of Gicewicz’s production, “the leadership he brings to the group is something that you guys would never see. What he does in our locker room, the energy that he brings every day to practice. He’s been an outstanding addition to our team.”

Its safe to say that in his first year in Amherst, the St. Lawrence transfer is making himself an invaluable piece for UMass.

“If I could’ve just kept putting Carson Gicewicz on the ice all night,” Carvel said, “I would have.”