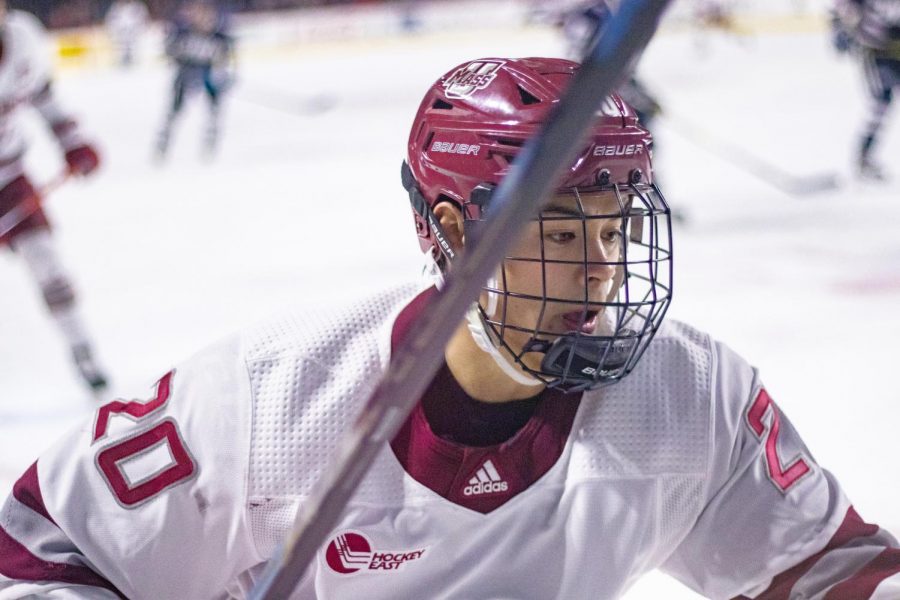 Vermont finally had the Massachusetts hockey team on its heels.

Yes, it took until the back half of the second period, but the Catamounts (0-1, 0-1 Hockey East), who were playing their first game in 289 days, seemed to find their groove. They had shot attempts, zone time and pressure.

Then No. 10 Minutemen (3-3-1, 3-3-1 HEA) forward Carson Gicewicz was charged with a game misconduct for hitting UVM defender Carter Long in the head with 7:30 left in the period and the Catamounts were looking at five minutes of a man-advantage. The score was only 1-0 UMass when Gicewicz took a stroll to the dressing room. UVM had a real chance to not only tie it but take a lead.

When the penalty expired, the five minutes had prooven a large momentum shifter. The surprising part: UMass had the momentum.

“We made them dump the puck in and we did a really good job with retrieving and getting the puck down the ice,” UMass head coach Greg Carvel said of the five-minute kill. “Really didn’t let them set up very much and then pressured the puck well.”

The most important player for UMass on the penalty kill was Oliver Chau. The senior was the driving force behind preventing the Catamounts from establishing sustained pressure in the UMass zone.

Chau was one of the UMass skaters who saw the most time during the five minutes. His shorthanded goal was the highlight of his deployment.

After the puck was cleared from the Minutemen’s end three minutes into the penalty, Jake Gaudet and Chau earned a 2-on-1. That’s when Gaudet dished one across to Chau, as he ripped one past Vermont goalie Tyler Harmon to extend the UMass lead to 2-0.

But Chau’s presence was felt in more ways than just the goal.

Prior to the lamplighter, Marc Del Gaizo cleared the puck over all five Catamounts and onto the stick of Chau, who almost potted one on the breakaway.

Around the 3:20 mark, which was after the goal, Chau chased UVM forward Jacques Bouquot for the loose puck in the UVM end. Chau prevented the Catamounts from an easy and seamless breakout, furthering stymieing the UVM power play.

That led to Zac Jones finding Chau for an open breakaway in mid-ice. Chau came oh-so-close to corralling the puck and getting a chance at a second shorthanded goal on the same kill.

Two breakaways, a goal and lots of pressure. Quite the kill from Chau.

Chau was one of the veteran forwards Carvel tapped at the beginning of the year to step up. Chau’s always been a solid sideshow. But with this being his senior year and John Leonard and Mitchell Chaffee in new uniforms, Chau’s bench boss wanted to see him make a greater impact.

The five-minute kill certainly featured that.

“I think he’s been easily our best forward,” Carvel said of Chau after the win. “He’s got great speed, he’s got great creativity, good offensive sense. I thought tonight he was really reading the game. He put himself in positions to get up ice and get behind them.”

UMass even got an offensive zone draw during the five-minute kill, which was a testament to the Minutemen’s aggression while down a man. It was certainly evident to the opposing bench.

“Their penalty kill is so aggressive, it’s structured,” first-year UVM head coach Todd Woodcroft said. “When you have players who can skate like them, they dictate the plays.”

The kill wasn’t without some chances for the Catamounts. After all, they did have one extra man on the ice for five whole minutes.

Vermont finished with six shots during the power play. Their best chance came at the start of the 5-on-4 when Catamounts defender Cory Thomas brought the puck down the left boards and cut to the middle, bolting right to UMass’s slot. Matthew Kessel and Zac Jones – the two UMass d-men in charge of that area – got sticks on Thomas, but he still had a point-blank chance on Minutemen goalie Matt Murray.

Murray stretched out and got just enough of it with his right pad to keep UMass in the lead.

UMass finished the five minutes having deployed nine different forwards to kill off the major. They even came away with a larger lead.

But the most important change between the start and the end of the five minutes for UMass: They put momentum on its side and never looked back.