Cal Kiefiuk tallies a goal and an assist in the win 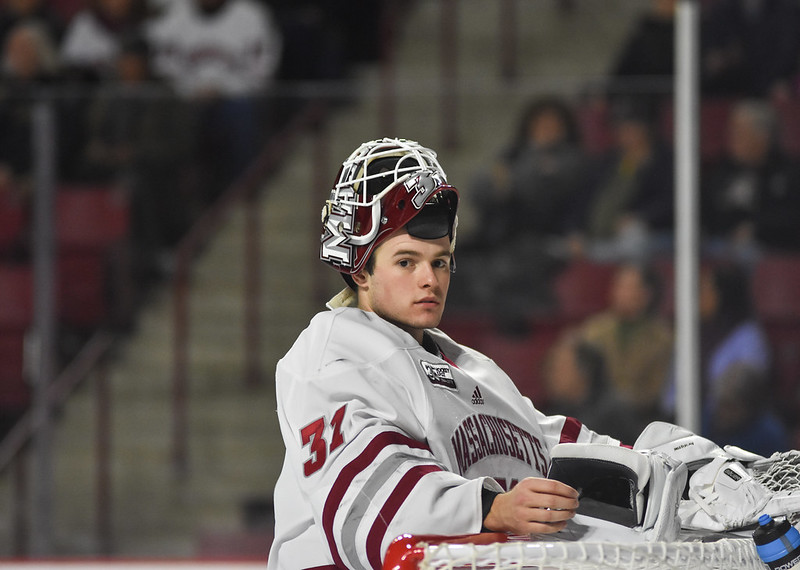 Pounding the rock is a mantra Massachusetts hockey coach Greg Carvel often harps on and Saturday night his team relied on that to beat visiting Vermont, 4-0.

“I was happy with our start,” UMass coach Greg Carvel said. “There’s things we’ve been focusing on the last two weeks. We wanted to play better defensively and we took some steps forward.”

The second period saw the Minutemen’s efforts of pounding the rock rewarded as they netted two goals to take command of the contest heading into the third period.

The game’s first goal came courtesy of Cal Kiefiuk early in the second frame. With the puck above the left faceoff circle, Kiefiuk tried to fit a pass through to Eric Faith in front of the net. The puck took an odd bounce somewhere along the way and trickled its way past UVM goaltender Tyler Harmon.

UMass wasn’t done. Despite a major penalty going against the Minutemen due to a Carson Gicewicz hit, they managed to double their lead. A turnover by UVM let Oliver Chau and Jake Gaudet leak out on an odd-man rush. Gaudet calmly slotted a pass across the crease to Chau for the shorthanded goal and a 2-0 lead.

While the five-minute major allowed the Catamounts to narrow the gap in shot totals, the Minutemen still managed to take 51 total shots with 34 finding their way on net compared to UVM’s 29 total shots, just 15 of which were on net.

Despite being peppered with shots all night Harmon stood tall in net for the Catamounts. The senior goaltender—in just his seventh career game—made 30 saves, letting in just three goals.

Early in the third period the Minutemen extended their lead further. A defensive zone turnover gifted Kiefiuk the puck, striding toward the net. Kiefiuk threw a pass behind his back, finding Matthew Kessel’s stick who then buried a shot for his second of the season.

On the heels of Carvel’s call for a goalie to take control of the net, Matt Murray got the call between the pipes. Seeing 15 shots, Murray stopped all of them, notching his ninth shutout of his career—extending his lead across the UMass record books.

“Filip Lindberg, he’s out with an injury right now,” Carvel said. “So for the first time in the three years of these kids together, one of the two is hurt—and he should be out for a couple weeks. So we’re going to see what Matt can do. Earning a shutout is a pretty good way to start.”

An empty net goal by Bobby Trivigno as the game neared its close—despite being tripped in the process—put the Minutemen up by the final 4-0 tally.

“It was a solid effort up and down the lineup,” Carvel said, “and a win that felt pretty secure for most of the game.”

UMass will look to complete the weekend sweep of UVM on Sunday with puck drop set for 6 p.m. at the Mullins Center.