The impact of Maddie Sims

The defensive anchor of the solid Minutewomen defense 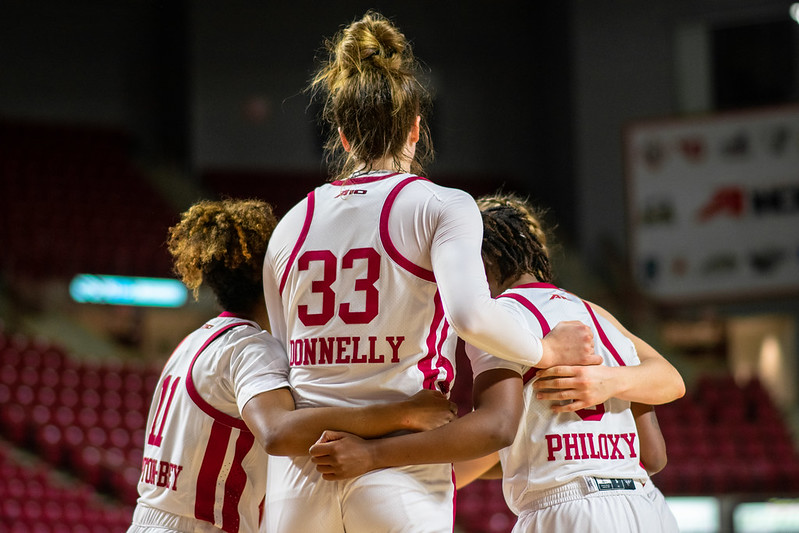 Graduate student, Maddie Sims stepped onto the court and into the starting lineup for the Massachusetts women’s basketball team just five games ago but her veteran impact has made all the difference.

With such transparent chemistry between the 6-foot 2 forward and her co-captain Sam Breen on both ends of the floor, it’s hard to believe that both players spent some time watching from the bench last season.

Sims brings versatility for UMass (4-1) offensively and provides rim protection down low. In a game like Thursday night’s, where the Minutewomen had a 74-55 win over New Hampshire (1-4), Sims found herself with 12 points in the first half and finished the game with five rebounds.

“I thought Maddie played well,” head coach Tory Verdi said. “She gave us points and defensively she is anchoring us right now, she’s doing a great job there as well.”

Sims is averaging 8.6 points so far this season. Her experience as a leader and playmaker has set the tone for the young members of this team to follow.

“Maddie has played a lot of basketball in her days,” Verdi said. “She is seasoned and experienced. All of that helps us with communicating and helping out some of the new ones.”

Sims believes that a positive impact on the game, makes a positive showing of her experience.

“I just try to effect every play as much as I can and just do whatever the team needs at that time,” Sims said. “Whether it be scoring, rebounding, passing or whatever I need to do to help the team win is how I assert that experience.”

When you have a player in the guard position like Destiney Philoxy who can find Sims and Breen down low no matter what defense is thrown at her, points in the paint are that much easier. Already this season, the trio of Philoxy, Sims and Breen have developed a consistent flow with high production of points from inside and outside ball movement.

Tonight, that chemistry was on full display.

The “twin tower” duo of Breen and Sims combined for 26 first half points. Philoxy finished the game with nine assists.

“[Destiney] impacted the game greatly,” Verdi said. “Finding Maddie Sims and dropping off passes to her, Maddie should probably take her out to dinner.”

Sims paid similar respects to Philoxy’s passing tonight when discussing her mentality heading into the game.

“I just wanted to be a little bit more aggressive on offense and help contribute on that end a little bit more,” Sims said. “Destiney did a great job of finding me down low so that’s credit to my teammates.”

So far this season, the Minutewomen have played without 6-foot 5 sophomore Maeve Donnelley and the last two games without junior Madison Lowery. With a short but talented bench, Sims has no fear in maintaining that same level of aggression.

“I just play as hard as I can and if I get in foul trouble, we have a great bench with Angelique [Ngalakulondi] and Makennah [White].”

By nature of this COVID-altered season, any game could be the team’s last. Knowing that this is her final season no matter what, Sims uses that as fuel to drive this team towards victory.

“We just want to take it game by game because you never know how many games you have left,” Sims said. “We play like it’s our last and I think that has really helped us.”

The Minutewomen head back home on Sunday to face St. John’s. Tipoff at 2 p.m.

Lulu Kesin can be reached at [email protected]