‘There’s good and bad’: Walt Bell reflects on recruiting in a pandemic 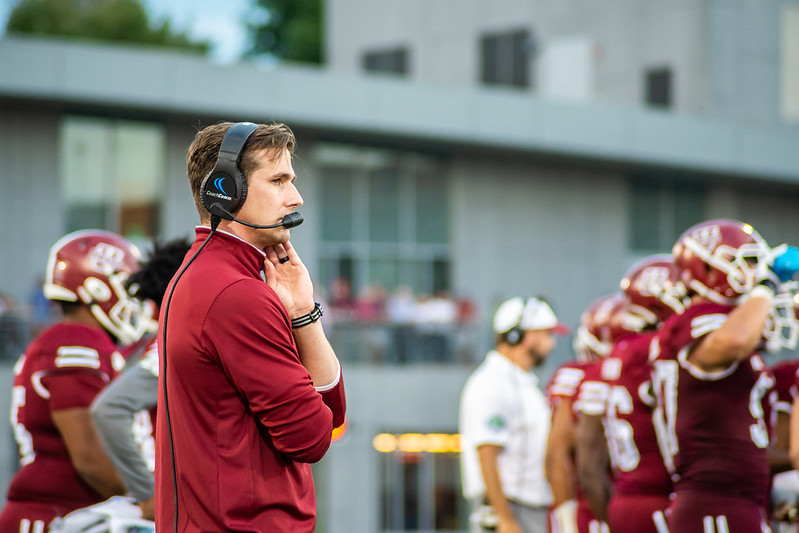 Walt Bell is a passionate guy with a plan. Example No. 3459 of that came in his end of the year press conference when a reporter asked him what he thought of the negative perception of the program.

Well, the football coach proceeded to explain exactly how it’s grown. From the farmer digging a hole exactly 12 inches deep, to planting the seed, to putting fertilizer and water on the spot every day for five years with no growth during that time, to when it finally grows 120 feet in the sixth year, Bell detailed exactly how bamboo sprouts up. He then compared that to his program, in that it would take a lot of time for UMass to grow into becoming a college football powerhouse.

But one area in which Bell has had to find a new way to channel that fervor is meeting recruits via Zoom. That has proved to be a challenge.

With the COVID-19 pandemic, all recruitment is done over video calls. There’s no more travelling across the country to meet with kids and their parents. No more heading down south, up north or out west to watch a future Minuteman play in a high school game.

Let’s begin with the good.

In the eyes of Bell, one thing the pandemic has allowed for is more family time, which is always a good thing. Another positive out of this: Though it may not be in person, there’s more time to talk with recruits.

“With it being a national pandemic as opposed to something else, everyone that we’re recruiting is stuck at home as well,” Bell said. “They’re not as busy with their day-to-day lives, so we’ve actually been able to spend more connected time on the phone, on Zoom, on FaceTime with our recruits than we normally would.”

Over those virtual meet-ups, its Bell and his staff’s job to convey that passion for UMass football – that 5-year bamboo plan – with recruits.

“No matter the medium, the biggest thing is just authenticity,” Bell said. “Just having the ability to be yourself, not try to be a used car salesman, not try to wear a mask and be who they want you to be. I think being genuine and authenticity is what translates, and I think that translates on video no different than it does in person.”

Bell’s certainly done quite a bit of recruiting in his young football coaching career. Since 2011, he’s coached at Southern Miss., North Carolina, Arkansas State, Maryland, Florida State and now UMass. If anyone understands the grind of recruiting, it’s Bell.

He’s picked up quite a few lessons from those stops such as promoting the organization the right way and the sheer amount of tape he has to watch on every single kid. He also has to factor in UMass not having the glitz and the gleam of the Clemsons, the Alabamas and the Georgias. At least for now.

But there’s one lesson he’s taken above all.

“It’s the work required, especially at a place like this where you’ve got to do a great job in the evaluation process so you can develop a final picture when they’re 21” Bell said. “We’re not trying to get the best 18-year-olds in the country. We’re trying to find the best 21-year-olds in the country and that’s a little bit of a different mindset.”

That’s where the “bad” of recruiting in a pandemic comes into play. And it’s not so much bad, as it is just a norm of recruiting that can’t be made up for when virtual.

“There’s something to be said about looking somebody in the face and you can learn so much about a person just by handshakes and hugs and seeing how they interact with their own families, seeing how they treat people that can’t do anything for them in their own school,” Bell said. “There’s so much about what makes a football player a good football player or somebody that’s going to grow and develop at a really high rate that has nothing to do with physical skill.

“That’s a part of this that you’re really missing cause there are some kids, they may not look exactly the way they’re supposed to look or do whatever, but when you meet them you know they’re going to do what it takes to be a good football player. That’s the hard part that we’re missing.”

It’s been quite a new experience for Bell and Co. with having to adapt to recruiting in a pandemic. Nevertheless, we’ll see how his crew did at virtually recruiting when early signing day takes place on Dec. 16.

I wonder if he told kids he was trying to recruit how bamboo is made.