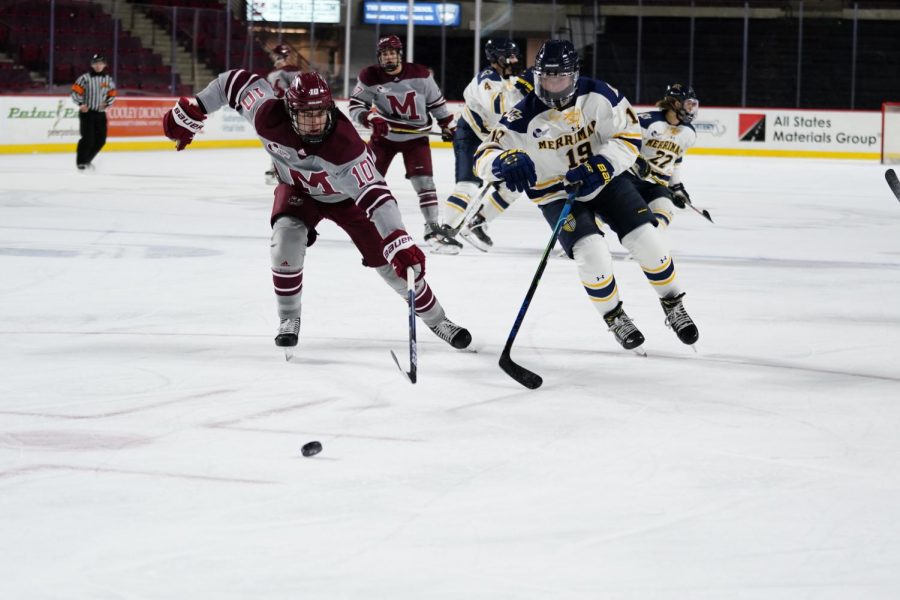 With six games under its belt, the Massachusetts hockey team has played at least two more games than any other team in Hockey East, and that means a clearer idea of what the 2020-21 Minutemen are.

UMass wants one goaltender to take the reigns.

It had been practically a full calendar year since the Minutemen had one goaltender start both games of a weekend series. After Matt Murray gave up just one goal on Saturday night, stopping a number of odd-man rushes, he earned himself a second-straight start on Sunday.

Though less impressive than Saturday’s performance—the senior goaltender let up three goals on 19 shots—it gave a glimpse into UMass’ plan for the goaltenders this season.

“We told the goaltenders this year we don’t want to go back and forth, we want somebody to own the net,” head coach Greg Carvel said. “We felt that Matt played really well last night and instead of going just back to Lindberg, we gave Matt the chance to own the net.

While Murray might not have done enough to stick between the pipes for the foreseeable future, it is clear that Carvel and Co. expect to find a single netminder to take the bulk of the playing time this season.

After two-plus years of alternating goaltenders under Carvel, the move toward one player getting a majority of the starts could come as a surprise—especially considering the numbers UMass’ two goaltenders have put up in their time in Amherst.

Both Murray and Filip Lindberg ranked in the top 10 nationally for goals against average last season, but it appears as if the Minutemen are leaning toward riding the hot hand sooner rather than later.

Defensive breakdowns continue to be a problem.

Coming into the 2020-21 campaign, it had been two seasons since UMass had a record below the .500 mark. Now, after six games, the Minutemen find themselves 2-3-1. One of the biggest problems in their slow start: giving up odd-man rushes.

“We have some defensemen that are making overaggressive reads and not letting the game come to them” Carvel said. “I think its mostly that. I don’t think that its really getting caught with our forwards, I just think our defensemen are just allowing the game to jump by them.”

On the weekend, UMass defensemen routinely found themselves out of position in transition and on stretch passes after they’d stepped up in the offensive zone.

While defensive breakdowns have snake bitten the Minutemen thus far this season, it’s not something Carvel is overly concerned about.

“We think we know why a lot of its happening,” Carvel said, “and we’re addressing it.”

UMass penalty kill looks elite—but they’ve had too many chances.

After the Minutemen’s penalty kill went 5-for-6 on Sunday night, the unit’s kill percentage now sits at 92 percent. The mark is good enough for 10th nationwide—and only one team above them had played as many games as the Minutemen.

Though UMass has been nearly automatic when on the penalty kill, its spent far more time than it would like down a man.

With just six games played, the Minutemen have already taken 25 penalties. While it hasn’t caused too much trouble just yet with UMass having surrendered just two power play goals, it has gotten in the way of the Minutemen generating sustained offense, as they’re forced to dump the puck to kill off penalties more often than not.