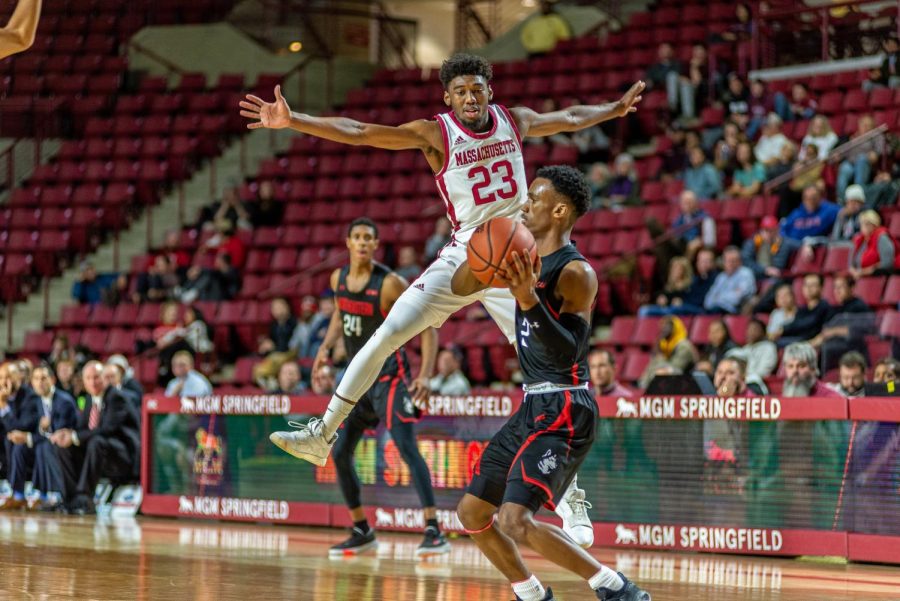 The Massachusetts men’s basketball team will head to Philadelphia on Wednesday to take on La Salle in its first Atlantic 10 conference matchup of the season. The Minutemen (1-1) are looking to rebound after a tough three-point defeat to Northeastern on Sunday. One player that could see increased play time against the Explorers (2-3) is redshirt freshman guard TJ Weeks.

Weeks, who played only 10 games last season due to injury, has made an impact all over the floor for UMass. Despite having not started in either game, Weeks sits third on the team in scoring with 12.5 points per game this season, sitting only behind Tre Mitchell and Atlantic 10 Rookie of the Week Javohn Garcia.

“It’s been pretty good being back out there,” Weeks said about his return. “I was very excited, very nervous headed into the first game. But overall, I just want to come in and help the team out. It felt great being out there again.”

Though he played just 18 minutes in the loss against Northeastern, Weeks’ impact was evident down the stretch. After subbing in with 2:01 remaining, trailing by eight, Weeks willed his team back into the game. The guard scored eight of the Minutemen’s last 14 points, including a put back layup after a hard-fought offensive rebound and a fast break layup generated from a steal. He finished second on the team in rebounds with six, tied for second with two steals and third in scoring with 14 points.

UMass head coach Matt McCall said after Sunday’s game that he regretted not giving the all-around guard more playing time. With the performances Weeks is having, its hard not seeing that come to fruition on Wednesday.

“You can’t really just throw me out there,” Weeks said about his limited play time. “It’s day-to-day how my body feels. Sitting out as long as I did, I can’t just jump right in there expecting to be at the level I was. I’m taking it day-to-day, taking care of my body and coming in ready to work when I get the chance.”

While Weeks is far from the biggest player on the team—his 6-foot-4 stature ranks in the middle of the pact in terms of height on the UMass roster—ferocity on the boards is hereditary to him. Tyrone Weeks Sr., TJ’s father and namesake, played four years at UMass as a forward averaging 8.8 rebounds in each of his final two seasons and earned his way into the 1,000 point club.

“My dad when he played, he was one of the leading rebounders on his team,” Weeks said. “That prowess that he had, I inherited that, I take pride in that.”

While McCall admitted to needing to give Weeks more playtime, it has been a challenge managing roster rotations early in the season after the team left 14-day COVID-19 quarantine on different timelines. Though five different Minutemen are averaging double-digit scoring figures this season, the spread of playtime has been fairly uneven with Javohn Garcia and Tre Mitchell averaging 34 and 33.5 minutes respectively. Four UMass players are averaging over 28 minutes per game, while six others average 12 or less.

“We had half the team in quarantine longer than the other half of our team,” McCall said. “We’ve got to utilize our depth and have it be one of our strengths because I think we have really good players. It’s not just TJ, it’s really our entire bench. It’s early, I wish we had a few more games under our belt for our rotations but that’s not the case.”

In one sequence on Sunday against Northeastern, Weeks flew back on defense to secure a rebound, nailed a 3-pointer on the offensive end and drew a charge on the ensuing defensive possession. He also serves as one of the Minutemen’s better defenders in the heavily utilized full-court press, showing how he can seemingly make an impact at all areas of the court at once.

Against a physical La Salle team that carries a chip on its shoulder into every contest, more minutes for Weeks could prove vital to a potential Minutemen victory. Though it might not always show in the stat sheet, Weeks’ willingness to create contact, draw charges and make hustle plays could be the difference maker in Philly on Wednesday.