Murray notches second shutout of the season for the Minutemen 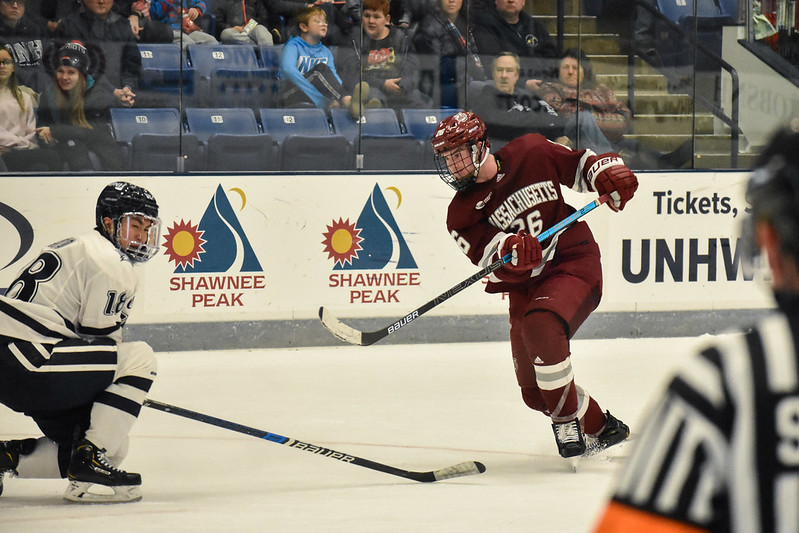 The Massachusetts hockey team picked up its first victory on the road in a 4-0 win against New Hampshire on Wednesday.

Unlike the previous three outings for the Minutemen, offense was hard to come by against the Wildcats early on. Neither team scored a goal in the first period, and UMass was unable to get on the board until over halfway through the game.

“It’s tough to play when you’ve got a two-and-a-half-hour bus ride,” UMass coach Greg Carvel said of the slow start. “I thought we were a little slow out of the gate, took three penalties in the first period, but those kills really spurred us.”

It was Matthew Kessel who finally found the back of the net for the Minutemen. Kessel has now scored a goal in each of UMass’ last four games, and his pairing with Zac Jones continues to generate opportunities in the offensive end.

Here's a look at @mkessel72's fifth of the season, his fourth straight game with a goal, set up by @josh_lopina and @bobbytrivigno

“Matt Kessel has quietly scored four goals in four games,” Carvel said. “Which is quite a feat for any player but as a defenseman to score four games in a row… It’s quite a stat.”

The Minutemen kept the pressure on throughout the second frame, and while they weren’t able to double their lead in that period, it didn’t take long in the third before that changed.

With 15 minutes to play, Carson Gicewicz slapped an offensive rebound past UNH goalie Mike Robinson for his sixth goal of the season. The redshirt senior is quickly becoming one of UMass’ best players offensively.

“You got to go to the net to score, and he’s a big man, I don’t think the other team’s players want to mess with him,” Carvel said of Gicewicz. “So, he gets a little space, and he’s making the most of it.”

The Minutemen defense never allowed UNH to battle back into the game, and Bobby Trivigno was able to add an empty net goal for UMass. And just for good measure, Zac Jones put one more past Robinson with under a minute to play to seal the deal.

Filip Lindberg remains out of the lineup for the Minutemen battling an injury, so Matt Murray got his fifth straight start, and may be earning a permanent spot in the net after stringing together a few solid performances in a row.

Murray did not allow the Wildcats a single goal on 27 shots, pitching his second shutout in four games. Last week Carvel had high praise for his goaltender after a 6-2 win, and Murray topped that performance with a few key saves on seemingly wide-open nets for UNH.

“He’s given up three goals in the last four games, and two shutouts in there,” Carvel said. “It’s tough to get shutouts, whether you have 10 shots or 40 shots.”

After an inconsistent start to the season, the last four games for UMass have been anything but. Murray and the Minutemen backend have stymied opposing offenses both at even strength and on the penalty kill.

On the opposite end, UMass’ offense has found a groove as well. It has scored at least four times in four straight games and is getting contributions from all four forward units in the o-zone. The top line in particular has come together as of late, with Gicewicz, Jake Gaudet and Oliver Chau all making plays with the puck.

Chau, who was questionable to play against the Wildcats with his injury, suited up as the extra skater, and was able to run a few shifts with his top line. His slow return to the lineup is good news for the Minutemen, who were bit by the injury bug early this season. Freshman Oliver MacDonald has run on that line in his place.

UMass will not have much time to celebrate the victory, as it regroups and prepares to go back on the road to take on Northeastern in a home and home series this weekend. Puck is set to drop at 7 p.m. on Friday.