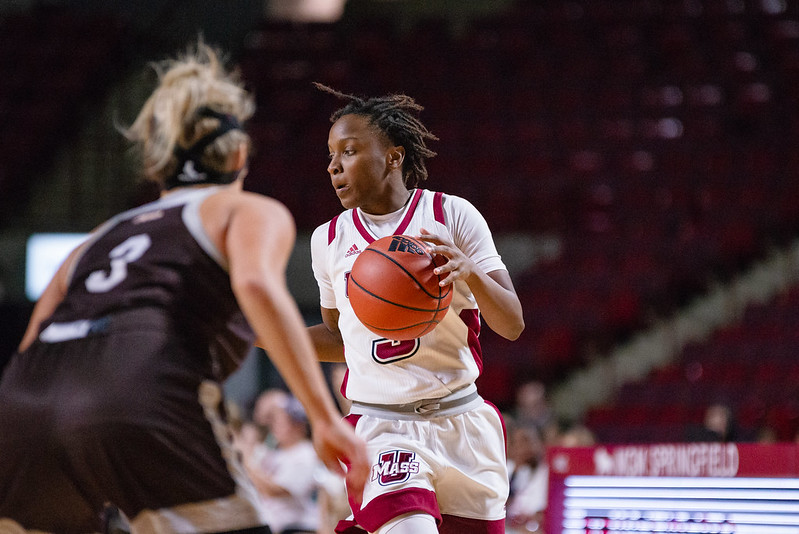 By Will Kharfen, Collegian Correspondent

From the start of play, the Massachusetts women’s basketball team ran away with the win over New Hampshire, failing to give up its lead the entire game. This was in large part due to the Minutewomen’s ability to control the pace of the game and play fast in transition.

UNH (1-4) hit a few early 3-pointers, but UMass (4-1) proved to be too much for the Wildcats as the Minutewomen dominated offensively, largely in the paint.

“We did a great job of coming out, having great energy, great focus and a great want to win,” said head coach Tory Verdi. “UNH came out and scored a couple 3s off the bat, but after that we did a really nice job executing and then the lead started to balloon.”

Forwards Maddie Sims and Sam Breen combined for 26 points down low, finishing with 12 and 17 points respectively, along with 16 of the team’s rebounds.

“I wanted to be more aggressive on offense and help contribute there more,” Sims said. “Destiney [Philoxy] did a great job of finding me down low, so a lot of credit to my teammates.”

“Destiney really was the catalyst tonight,” Verdi said. “Her ability to get up and down the floor, attacking downhill, collapsing in defense, getting people in rotation, and then dropping off passes. She played extremely well and her energy was infectious.”

UMass was also able to control the glass, grabbing 25 rebounds in the first half, and dominated defensively, playing an extremely efficient game. The team finished with 48 rebounds.

“We like to run in transition as a team, so we worked to get up and down the floor as fast as possible,” Sims said.

Three and ones between Breen and Sydney Taylor, crucial charges drawn by players such as Philoxy and an overall aggressive and efficient performance from the Minutewomen lead to the team’s strong first half, creating a 48-26 over the Wildcats.

“I’m really proud of our effort. I think it was demoralizing for them because we were having so much success on both sides of the ball,” Verdi said.

In the second half, the Wildcats came out with intensity against the Minutewomen, limiting them to only 26 second half points compared to 29 points of their own—20 of which came in the fourth quarter.

“We were playing well for three periods, but I’m upset with our fourth period effort,” Verdi said. “The momentum of the game changed.”

Despite the strong second half and terrific play from freshman guard Adara Groman, who scored a career high 16 points, UMass continued its brilliant showing throughout the second half.

The Minutewomen were ultimately able to finish out their win by a score of 74-55 over the Wildcats.