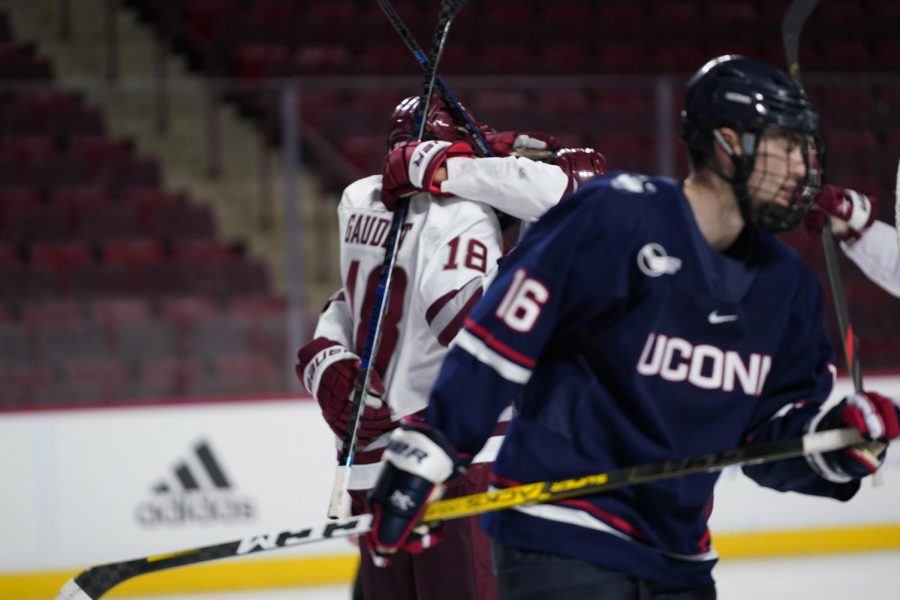 The Massachusetts hockey team was reeling.

That was until Jake Gaudet’s line jumped on the ice and spent the duration of their shift in UConn’s (1-4-1, 1-4-1 HEA) end, highlighted with a big hit from Gaudet. The shift led to UConn defenseman John Spetz taking a hooking penalty and putting the lethal UMass power play to work.

It turned out to be a big mistake for UConn.

On the ensuing man-advantage, Zac Jones faked a shot, slid a pass to Carson Gicewicz in the slot and the St. Lawrence transfer tipped it just enough to fly through the air and past UConn goalie Tomas Vomacka to extend the UMass lead to 4-2 and put momentum back on the side of the Minutemen.

“That was the turning point in the game for me when that line went out on that shift,” UMass head coach Greg Carvel said of Gaudet’s line’s performance following the two UConn goals. “Really turned the tide back our way which was so necessary because it was an onslaught there for the first five minutes and two pucks in the back of our net. TSN turning point was that shift.”

UMass never looked back from that point.

Roughly three minutes later, Bobby Trivigno brought the puck around the UConn net and found a streaking Garrett Wait, another transfer, in the slot who poked it past Vomacka to make it 5-2.

Then Gicewicz forced a Huskies turnover in his own zone and brought the puck in on Vomacka. He faked the slapshot and took a snapshot, propelling the puck past the UConn goalie.

As close as the game was early in the third period, things didn’t start out that way on Wednesday afternoon at Mullins Center.

The Minutemen opened the game on all systems go. For the first two minutes of the game, they kept the pressure on UConn, eventually forcing Huskies forward Brian Rigali to take a tripping penalty, putting UMass on the power play.

UMass carried over the trend of hot starts to periods from the first to the second when on the power play, Carson Gicewicz faked a slapshot and slid the biscuit across to Matthew Kessel who fired one past Vomacka to give UMass the 2-0 lead.

Kessel is now tied for the most goals by a defenseman in all of college hockey with four.

For those counting, UMass went 3-for-7 on the power play Wednesday night. That equals out to six power play lamplighters over the past two games.

The Minutemen tacked on their third goal of the game when Ty Farmer, Aaron Bohlinger and Bobby Trivigno connected for a tic-tac-toe-goal. It was Trivigno’s third goal of the season, but first that wasn’t an empty-netter.

UConn eventually came storming back with two goals of its own to begin the third period. First it was Hudson Schandor left alone in the slot to rip one past UMass goalie Matt Murray. Then, less than two minutes later, it was Jonny Evans firing one over Murray’s right shoulder to put the Huskies to within one goal.

Despite Murray giving up the two goals, Carvel was very happy with his goaltender’s 27-save performance.

“I thought tonight, from the start, he was on it,” Carvel said of Murray. “He was locked in. I think he was very comfortable in the net. Part of that is you can tell when he’s out playing the puck and he’s out there stopping rims and moving pucks, that just shows a goaltender that’s really confident.”

Those two goals could’ve sunk UMass and been enough for UConn to build on and eventually stage a full comeback.

But Gaudet’s shift following UConn’s hot streak was enough to deter any such event from happening.

The Minutemen’s next scheduled game is on Jan. 7 against UConn at Mullins Center. Puck drop is slated for 6 p.m.