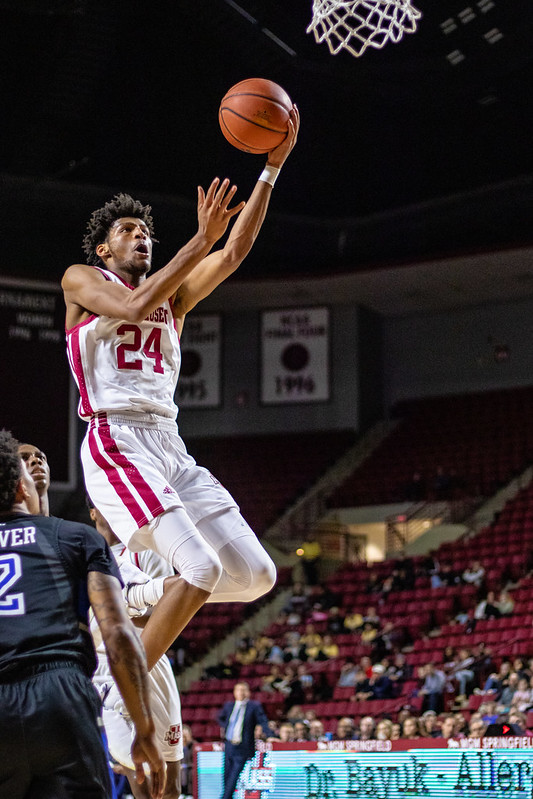 Role players and the depth of this Massachusetts men’s basketball team will be key in its weekend matchup with Northeastern.

The time has finally come. UMass will tipoff against Northeastern Friday for its first taste of college hoops this year. The expectations from last year are still similar for this young Minutemen squad; compete and the wins will come. There is a change of scenery however, with new freshman coming in, players transferring out and a couple incoming transfers to round out the squad. UMass head coach Matt McCall has been firm throughout this year that this is one of the deepest teams he has coached, and that versatility and depth will be critical for them to succeed down the stretch.

“I think we have the flexibility to do a lot of different things,” McCall said. “We can play big at times and we have length to go small in size. We could play four guards with Tre [Mitchell] in there. We could play a lot of different lineups. Now because of our lack of practice times, have we tried every possible lineup? No. I think the games will help us with that, and we have to see what works and start playing tomorrow. We have to go through some experiences as a team and see the things we are doing well and what lineups are clicking and doing the best together.”

The starting lineup is nearly molded into form with T. Mitchell, Carl Pierre and TJ Weeks solidifying themselves in their own roles. The focal point of the season will mostly focus on the improvement of Mitchell from year one to year two, along with the potential final season of Pierre, but the glue to this UMass team will be its bench.

The possibilities for lineup combinations will have McCall excited. With his talented freshman class making leaps of progress into their second year, along with the incoming freshman, he has a plethora of talent to throw at teams. Role players like Kolton Mitchell and Dibaji Walker will be a crucial part to the success of the Minutemen this season. Both players saw success over the span of their first season at UMass. For K. Mitchell, the sophomore guard saw his playing time split with Sean East who transferred out of the program during the spring. The sophomore only averaged 1.4 points per game, but it was his energy and defensive attitude that caught the attention of McCall.

“Kolton is a winner,” McCall said. “He makes game winning plays that lift everybody up around him. That is who Kolton is and he embraces that. He adds that dimension to our team.”

On the other hand, Dibaji Walker is coming off a year where he eventually found his role in a talented team. The junior transferred into the program last year and got cleared to play midway through the season. After struggling to find his rhythm through his first few games, his ability to score soon came to light. The junior added four games of double-digit scoring and added a spark to the Minutemen off the bench. Heading into the year, Walker will mix in at the three and four spots giving UMass potential scoring on the court.

“I think with Dibaji being back more at his natural position, out of necessity and out of depth he had to play a lot at the four spot for us. He essentially came in the game for Samba [Diallo], and had to play out of position. Him being back on the wing is a much more natural position. I think that has helped his development as well,” McCall said.

The Minutemen are certainly eager for its first test of action come this weekend. The expected breakout performances of T. Mitchell will shine along with the veteran leadership of Pierre but look to the bench for keeping this team alive down the stretch. The challenge of keeping this young squad focused and driven for the full forty minutes is still there, but it helps to have the depth that this squad possesses.

UMass is facing Northeastern Friday with a 1:30 p.m. tipoff at the Mullins Center.