UMass’ special teams continue to dominate in win over UConn

Kessel, Jones and Gicewicz each net power play goals for the Minutemen 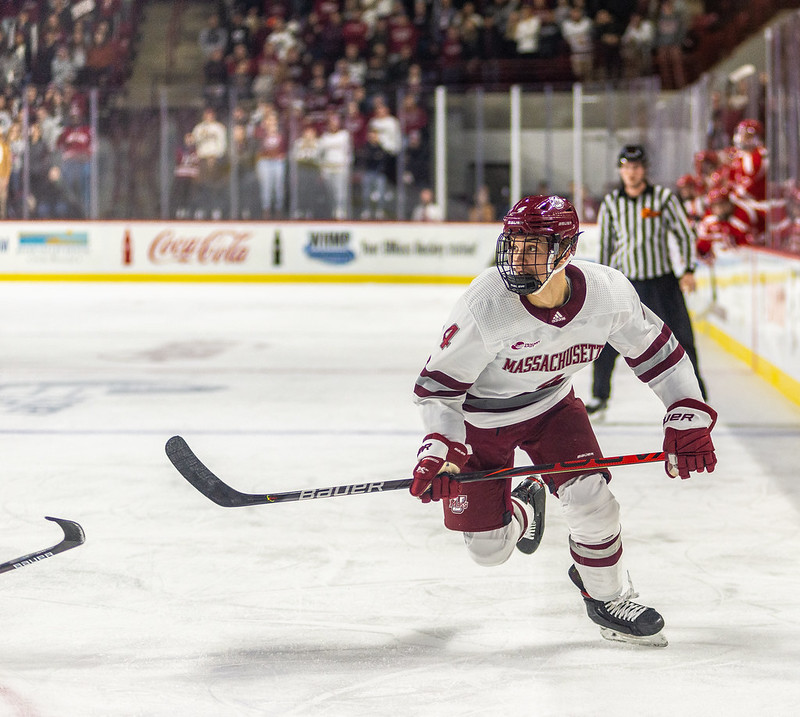 The Massachusetts hockey team earned its third-straight win, beating Connecticut behind another strong showing from its special teams units.

“It’s been a real focus for us going into this year,” coach Greg Carvel said about the power play. “I like that we’ve got two really even units that it seems like one night at least one of them is doing well, and it was such a huge factor tonight.”

Zac Jones got the scoring going early in the first period, slipping a shot from the point past UConn goaltender Tomas Vomacka just over three minutes into the contest.

“That’s his specialty, that’s where he really shines,” Carvel said of Jones’ ability to command the unit. “He really sees and controls the game He’s got tremendous puck skills.”

Less than a minute into the second period, the Minutemen found themselves on the power play again, and good puck movement from Bobby Trivigno and Carson Gicewicz led to Kessel burying his power play goal to put UMass up 2-0.

And just when the Huskies finally grabbed the momentum—scoring two goals in just over a minute to pull within one—Gicewicz decided to join in on the fun, netting a power play goal of his own as a part of his two goal period to put the game out of reach.

Through nine games this year, UMass has already scored 12 goals on the power play. Just last season, the Minutemen were only able to net 16 goals in 34 games with the man advantage, so there has been a major improvement in that unit so far.

Overall, UMass boasts the third-best power play in the HEA with a 27.9 goal percentage, despite having 16 more power play attempts than the two teams above them (Northeastern and UMass Lowell) combined.

And while UConn’s penalty kill struggled mightily all game, the same could not be said for the Minutemen unit, which did not allow a single goal in 10 minutes of penalty time on the night.

“I think the story of the game was special teams,” UConn coach Mike Cavanaugh said after the game. “They went 3-7 and we went 0-5 and that was the game.”

The UMass penalty kill has played well in every game to this point. It has killed off 35 of the 38 power plays it was faced with, and like the power play unit, the Minutemen’s 92.1 percent penalty kill rate ranks third in the HEA. They trail Providence and Boston College, who both have over 10 less penalty kill attempts than UMass.

Special teams can win or lose games, and that showed tonight, as 5-on-5 play was far more evenly matched through 60 minutes. The heightened focus that Carvel put on that area of the game has had a positive impact on UMass’ season so far, and continued dominance in that front will be helpful for the minutemen as they get their season back on track.