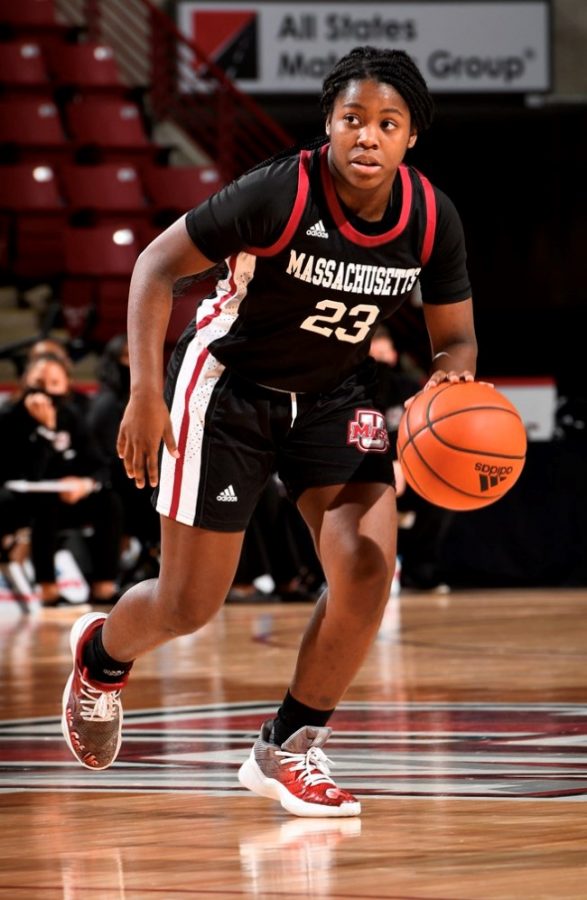 When the Massachusetts women’s basketball team first walked onto the court this season, it was somewhat of a surprise to see freshman Ber’nyah Mayo starting in her first career collegiate game. She was not someone head coach Tory Verdi had raved about much publicly beforehand, but as shown by her starter status, had clearly proven herself behind closed doors.

Since then, she’s been one of the five Minutewomen to start every game this year, has played 30 minutes or more in all but two games this season and has consistently brought a competitive spirit since that first start in late November.

“She was thrown right into the fire, and she did not hesitate,” Verdi said of his first-year floor general’s early career as a Minutewoman. “She’s been doing a great job for us.”

While Verdi has clearly entrusted junior guard Destiney Philoxy with the majority of the playmaking duties on offense, as she is currently tops in the nation with over eight assists per game, Mayo’s playmaking duties come more so on the defensive end. Her activity level on that end of the floor has resulted in an average of over 2.5 steals per game, which is second-best in the A-10 this season. Mayo feels that this intensity defensively helps the team’s attack, as well.

“I understand that defense wins games, so it doesn’t just come on offense,” Mayo said of her two-way playmaking mentality. “If I have very active hands and do my part on defense, it’ll get us running in transition, and then the offense will come within the defense.”

“She’s extremely active, and she’s got great hands; she’s got a great feel for the game, and she’s very confident for a freshman,” Verdi said of Mayo’s defensive acumen. “Her competitive spirit allows her to come up with those deflections and steals.”

A great deal of that confidence comes from being teammates with Philoxy, Mayo’s backcourt partner and recently named team captain. The junior guard has sped up the learning curve for Mayo as she learns the game at the DI level while connecting with her as both a player and a person.

“She’s always in my ear telling me ‘think what’s next’ rather than dwell on the past,” Mayo said of what she’s learned from Philoxy thus far. “It starts in practice, though. We have a great bond in practice, and off the court, as well, which really goes to show on the court. She tries to put me in the best position possible, and to keep me learning and focused.”

Mayo and Philoxy will have their latest test on the defensive end with a matchup against Saint Louis guard Ciaja Harbison this weekend. The 5-foot-6-inch guard is third in the A-10 in scoring this season, averaging over 18 points per game despite some shaky efficiency –33 percent from the field.

“We know that she’s a scoring guard; she’s going to play the point, and they’ll move her to the off-guard [position], as well,” Verdi said of how his guards will match up with Harbison. “She can score at all three levels… we gotta contest the three, but be ready for her to put the ball on the floor and create for herself and for her teammates.”

The Minutewomen will have two chances to stop Harbison and the rest of the Billikens’ offense this weekend, the first of which will be Friday afternoon. Tipoff in Missouri is scheduled for 1 p.m.