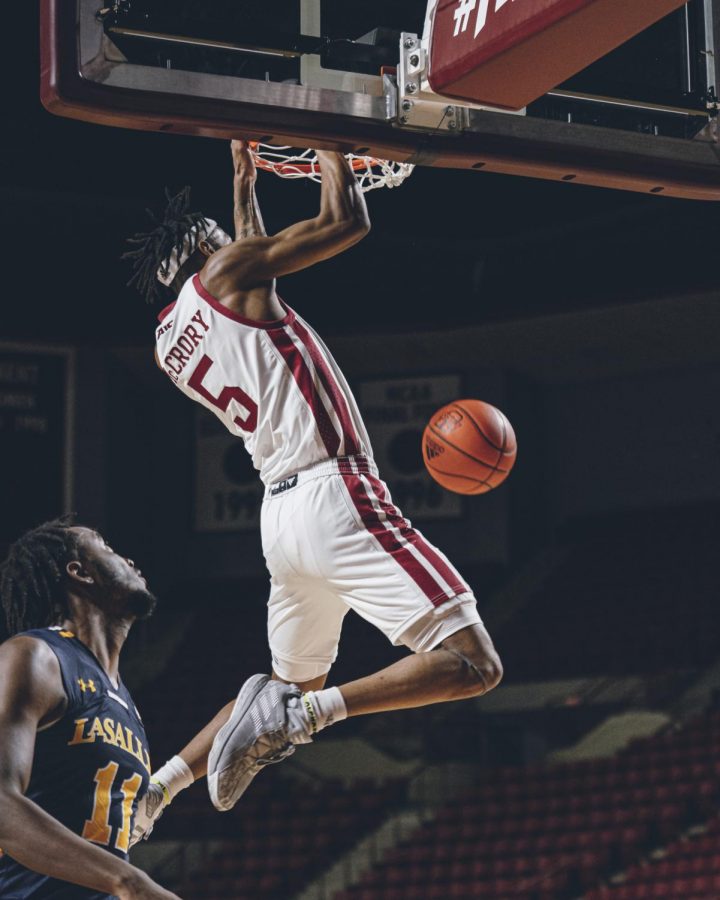 It was another spark of offense and dominant performance from Cairo McCrory that catapulted the Massachusetts men’s basketball to victory over La Salle by a score of 83-67.

The victory certainly rejuvenated the team after a disappointing loss to George Mason in their last conference game and put the Minutemen (3-3, 2-1 Atlantic 10) back in the win column after back-to-back losses.

McCrory was the spark plug to the offense once again and came alive down the stretch of the second half. Aside from his offensive production, the freshman was solid defensively accumulating a block and six rebounds on the glass against the Explorers (5-6, 2-2 A-10).

“Just his energy coming off the bench [is huge],” UMass coach Matt McCall said. “It’s infectious throughout our team. You saw it at La Salle, he was a huge reason why we won that game as well. His ability to rebound, he can guard multiple guys out there on the floor. Coming out of high school everyone was like ‘Can Cairo McCrory shoot?’ Cairo McCrory can shoot, he kicked in a three there and he shoots the ball extremely well.”

“When he is out there he impacts the game in so many different ways.”

McCrory’s versatility has been a spark for the Minutemen. Not only can McCrory stretch positions from playing the forward spot but when McCall runs a small-ball offense he can be utilized as a power forward if needed. His athleticism is second to none which has created chaos for opposing teams as he is a force to be reckoned with when it comes to rebounding on both ends.

UMass was fortunate to have four players finish in double digits, one of them being McCrory. McCrory put up 15 points on 6-of-8 shooting from the field and 1-of-1 from beyond the arc. McCrory contributed to the Minutemen shooting just under 50 percent from the field along with his six rebounds that tacked onto the team total of 43 which was 10 higher than La Salle.

McCrory has added a flare of offense and a mentality on defense that has proven to be key for UMass so far this season. He hasn’t torched opponents offensively with silky moves or crossovers, but he plays through contact and has the ability to attack the glass on a missed shot for a put back.

“I am very proud of the way [Cairo] played today,” Carl Pierre said. “He played with a lot of effort, he played really tough and I think that just goes right in line with how he has been playing in practice and the type of person he is.”

The progression of McCrory’s game has been vital to this UMass team that is young with experience and molding into its own identity. They have struggled so far against zone defenses and have made mistakes offensively that have led to easy buckets but having a player like McCrory who hustles from one end of the court to the other makes running the team a lot more efficient.

After multiple alley-oop dunks toward the end of the game, McCrory showed why he was such a dominant force in high school and prep ball. His ability to stretch over defenders has been huge for the Minutemen, who can mix and match different looks with him and Tre Mitchell on the court.

UMass next takes on Rhode Island on January 7th with tipoff scheduled for 7 p.m.