In another defensive battle, UMass comes away with a shootout victory on Saturday

Special teams continue to favor the Minutemen over the weekend 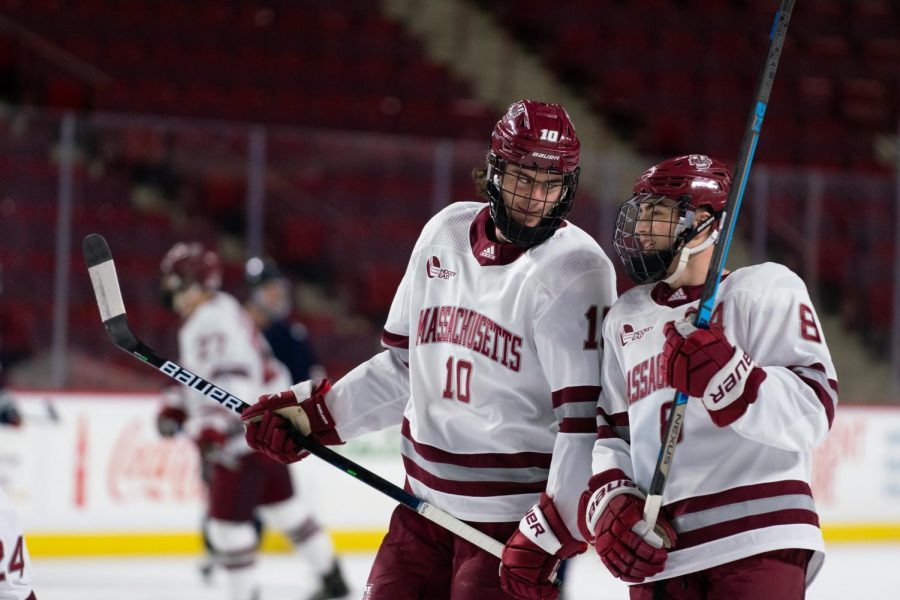 It was a case of deja vu for the Massachusetts hockey team, who found itself in its second shootout against Providence in as many nights. This time it was the Minutemen who came away with the extra point on Saturday.

And even when the Friars finally broke the ice midway through the second period, it took a deflection off two different Minutemen to get the puck past Filip Lindberg, who started again on Saturday after a solid performance in his return the previous night.

Just a few minutes after they fell behind a goal, the Minutemen found themselves on the power play with an opportunity to tie the game back up, and Josh Lopina would not be denied in front of the net.

Special teams have been key for UMass all year, and that continued this weekend. In addition to the power play goal, the Minutemen penalty kill did not allow the Friars a goal in nine attempts through the weekend.

Neither UMass nor Providence could find the would-be game winner in the final 20 minutes, so for the second time in as many nights, the Minutemen found themselves vying for a win in overtime.

Lindberg stood on his head in overtime, making a few key saves to help UMass get to a shootout. And with the game on his stick, Zac Jones found the back of the net to send the Minutemen home with an unofficial win.

Here's a look at the shootout winner by @zacrj51

“It’s just human nature… Feels like you won in overtime,” Carvel said of the tie. “It’s the same thing as the NHL, you feel like you won.”

Something that wasn’t hard to come by for UMass going into the weekend was scoring. The Minutemen scored four or more times in all but one of their previous nine games before the series against the Friars.

This weekend though, UMass only found the back of the net once on the power play.

“Providence is a very good defensive team, they always have been,” Carvel said. “I thought their goaltender played well, so I’m not worried about the offense. I’m proud of the defense.”

One positive sight in the shootout victory was the lack of penalties taken by the Minutemen, something that had been one of their biggest weaknesses so far. But after being dealt 14 minutes of penalty time in its first game of the weekend, UMass only found itself in the box twice on Saturday.

And even though it won’t count as a win, the Minutemen ended their weekend on a high note, leaving Rhode Island with an extra point in the HEA standings.