“It’s just lockdown defense all around:” What Maeve Donnelly’s return means for the Minutewomen 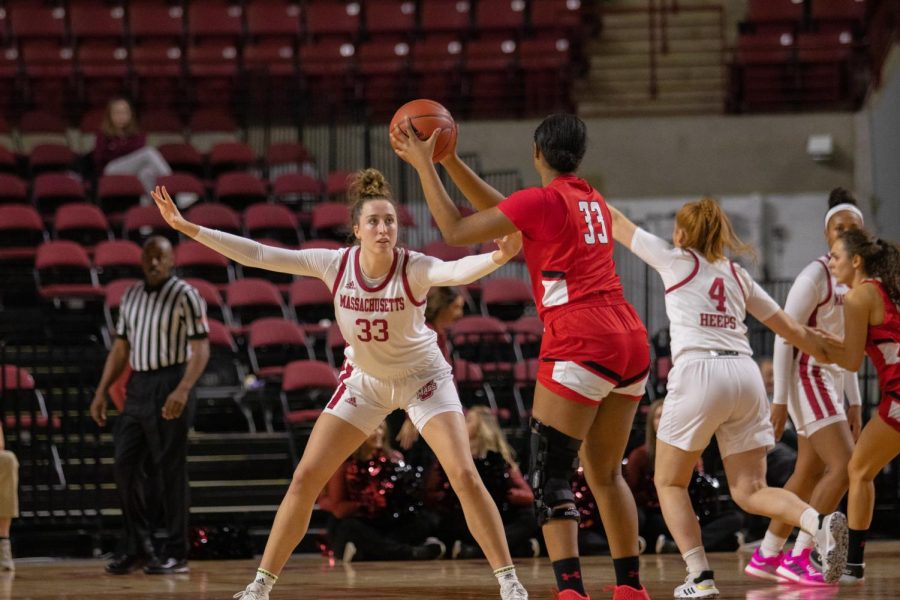 After missing the first six games of the season due to a concussion, sophomore center Maeve Donnelly is expected to make her season debut on Sunday Jan. 3 for the Massachusetts women’s basketball team against La Salle. It is unclear what Donnelly’s role will be and whether she will start but last season’s starting center will at least get some playing time under her belt.

“She’s been back, she practiced today, and now it’s just [a matter of] getting acclimated to everything on the floor and conditioning,” head coach Tory Verdi said of Donnelly’s status. “But I expect her to be in uniform this weekend.”

Donnelly’s return is a welcome one for a Minutewomen (5-1) team that has struggled to end possessions with defensive rebounds and defend the paint at times this season. Because of her absence, UMass has been forced to play without a true center, starting forwards Maddie Sims (6-foot-2) and Sam Breen (6-foot-1) together in the frontcourt. While Sims has been an adept defensive presence playing the five, the 6-foot-5 Donnelly and her even longer wingspan creates havoc for scorers trying to finish near the rim.

In Donnelly’s 31 games last season (all starts), the freshman center had 76 blocks – 27 more than the rest of the roster combined. This included a 10-block performance against Holy Cross, which tied a program record and was the most by a Division I freshman that season. While both Breen and Sims have averaged a block or more per game this season, Donnelly’s paint protection potency is on a whole different level and she is still improving in that area, according to teammates.

“Maeve has gotten better defensively, so now teams know the paint isn’t going to be as wide open as it was before,” said junior guard Destiney Philoxy, a pesky defender in her own right. “I got the perimeter, she’s got the inside; it’s just lockdown defense all around.”

A return could not come at a more opportune time for Donnelly, as La Salle (3-3) does not have a player taller than 6-foot-1 on its roster and has been outrebounded by about seven rebounds per game this season. She will look to supplant the frontcourt rotation and help UMass continue its four-game winning streak stemming back to early December. Tipoff is scheduled for 2 p.m.