‘It’s Matt’s net right now’: How Matt Murray took over as the starter for UMass

Murray has started nine games in a row 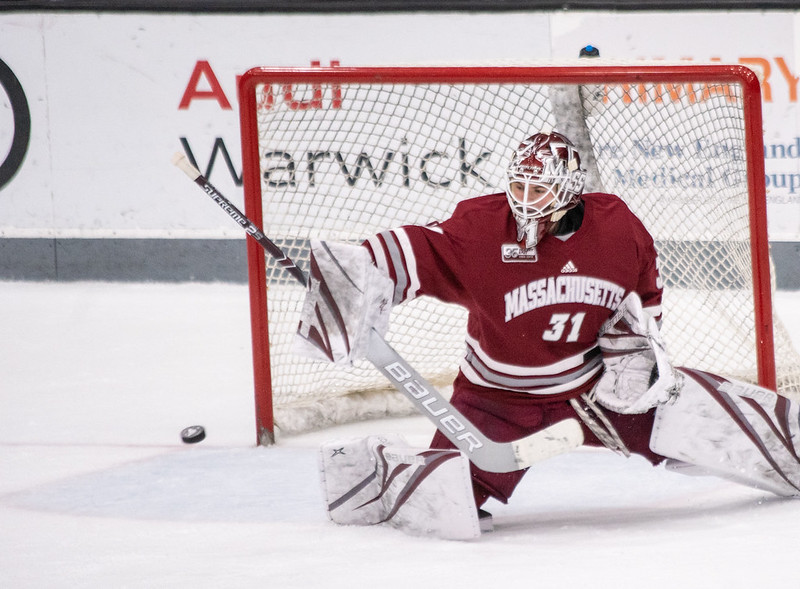 One of the largest developments in Greg Carvel’s time as the Massachusetts hockey team head coach came this past summer.

For two seasons, goalies Matt Murray and Filip Lindberg shared the net for UMass. In 2018-19, Murray got the nod to start the postseason, but Lindberg ended up taking most of the run to the National Championship. For 2019-20, they split the games almost evenly. The jury’s out on what would’ve happened in the postseason given COVID-19’s entrance into the public sphere.

Carvel and the coaching staff held meetings with both goalies over the summer and the feeling was clear: it was time to ride with one.

“That was something that both the goalies wanted,” assistant coach and former goalie Jared DeMichiel said Tuesday. “And Carvel was on board with it.”

To start this season, Murray and Lindberg split. One started the first game of a back-to-back and the other would start the following day. Then came the Dec. 5 and 6 set against Merrimack and Murray started both games – a 3-1 win and a 3-2 loss. And then after a 4-0 win over Vermont, Carvel disclosed that Lindberg would be out a few weeks with an injury.

That paved the way for Murray’s last nine starts. He’s won eight of them, including the last seven.

“I felt good about it,” Murray said Thursday of starting nine games in a row. “Obviously it came out of an unfortunate situation for [Lindberg], but all that matters is he’s doing good now. Personally, I thought I’ve been playing well. It’s been great to have that confidence and know that you’re being that guy at the moment. It’s been a good ride so far.”

That ride doesn’t look to be ending anytime soon. His goals against average of 1.64 is good for ninth among all Division I goalies. His save percentage of .928 ranks 14th. Over the seven-game win streak, he’s posted three shutouts and given up a total of nine goals.

Carvel makes it very clear that he’s not a goaltending expert, and that all goaltending decisions usually fall on DeMichiel’s shoulders. So, in the former RPI goalie’s eyes, Murray’s quest to be the starter didn’t actually begin when Lindberg went down with an injury – that’s just when it finally happened.

It started when Murray first arrived on campus for the season.

“He showed up in unreal shape,” DeMichiel said. “In this pandemic, I don’t think it was easy for anyone to work out and find ice and be focused. I think Matt worked very, very hard and was creative and I think also mentally his maturity has taken a step on the ice, off the ice, in our practice and in our goalie sessions. He’s been very competitive and very dialed in.”

One of the aspects of Murray’s goaltending game that improved was his legs. They were more explosive than they were at the end of last season, causing him to better adjust to shooters in transition. He also appeared more controlled, allowing him to be in better position and direct rebounds to more desirable places.

Murray’s also shown a drastic improvement in handling the puck, which is something the coaching staff has been on him about since Day 1 of freshman year.

“It’s still not perfect by any means, but when he gets back there, and he stops pucks and moves pucks, it’s another element to his game that he didn’t really have as a freshman in college,” DeMichiel said of Murray’s puck-handling skills.

Lindberg recently returned from injury. The message to him hasn’t changed.

“He needs to practice and be as ready and as locked in as possible,” DeMichiel said. “If the opportunity arises, it’ll be there.”

Even with the uncertainty surrounding the schedule for UMass and the rest of Hockey East, one thing is very certain: Murray will be starting in net for the Minutemen.

“If Matt keeps winning games, we’d be idiots to take him out on that,” DeMichiel said. “That’s going to be on him to keep earning it.”