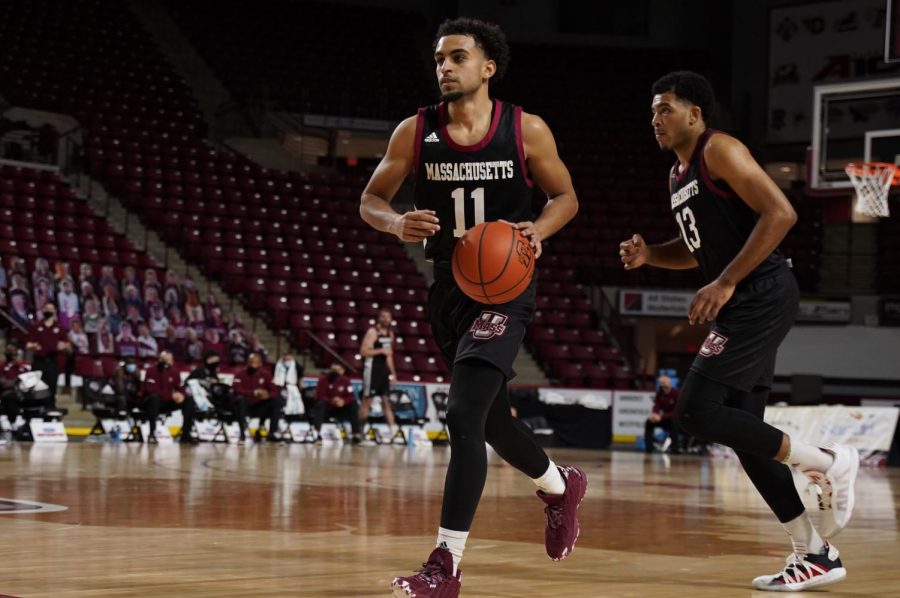 Lack of scoring depth from the bench hurt the Massachusetts men’s basketball in its 69-60 loss to Davidson.

UMass (5-4, 4-2 Atlantic 10) came into the game against the Wildcats (10-5, 6-2 A-10) riding a three-game winning streak sitting in 2nd place in the A-10. The contest against Davidson though proved to be too large of a battle for a young Minutemen team that could not hang onto the lead in the second half.

UMass had three scorers in double digits as Tre Mitchell, TJ Weeks and Noah Fernandes combined for 47 points while the rest of the team combined for 13. It was a mixed afternoon of basketball for the Minutemen who rode the dominant play of Mitchell during the first half but found themselves searching for scoring after multiple trips to the trainer’s table by the sophomore left them without a solid scorer.

“Our offense just got very, very stagnant in the second half,” UMass coach Matt McCall said. “It’ll be interesting to see the number of passes we had and our movement. I thought our movement was poor at times, and we got to the double bonus and didn’t continue to put enough pressure on them.”

The lack of scoring sunk any chance that the Minutemen had of climbing into the game late in the second half. After a commanding first half that saw UMass hold a double-digit lead for most of the half, the Minutemen fell apart in the second half. Davidson took advantage of the lack of UMass scoring and went on a tear led by its leading scorer, Kellan Grady, who finished with 22 points.

UMass had two players in Carl Pierre and Ronnie DeGray III play over 30 minutes against Davidson, yet they only combined for nine points. Pierre was 1-of-6 from deep, while DeGray III shot 1-of-4 from beyond the arc.

It was a much different story for DeGray III who was coming off A-10 Rookie of the Week honors thanks to solid performances against Fordham and Rhode Island. It was the first game in which DeGray III shot under 40 percent from the field, an impressive run that ended for the rookie against Davidson. Pierre knocked down only one 3-pointer in the game, something he hadn’t done since the second game of the season against Northeastern in which he didn’t even attempt a shot from deep.

In the second half, Davidson went on a 25-16 run from the 10:21 mark onward to close out the game. Killer shooting from Davidson put away any threat that UMass could’ve countered with, and lack of depth on the bench hurt. With Kolton Mitchell out due to a concussion suffered against Fordham and Cairo McCrory, Preston Santos and Dyondre Dominguez out, UMass had little to no bench to work with.

“I think our depth has been something that has been good for us and not having it is obviously going to impact the game,” McCall said. “Does fatigue come into a factor? Can we run and trap Grady more in the second half? I think the depth is a factor, no question.”

“I am not trying to make excuses, but I also think T. Mitchell goes down hard in the first half. He is trying to get through on one leg and try to still battle and compete. It just goes to show you just his warrior mentality. I don’t think some of our guys were feeling 100 percent either. But they are trying to battle through.”

Aside from Mitchell, Weeks and Fernandes, UMass shot a combined 4-of-21 from the field. From deep, the rest of the team shot 2-of-10. Being banged up and lacking a solid rotation of players hurt UMass down the stretch battling up against a senior-heavy and experienced team in Davidson.

UMass next travels to Richmond, Va. to take on Virginia Commonwealth with tip-off scheduled for 7 p.m.